No student in Uppsala can claim to have lived the full experience without participating in what has to be the most quintessential of Swedish student celebrations – Valborg.

Although Valborg was also traditionally celebrated in England, as Walpurgis Eve, this knees-up as an ode to the coming of spring is now a rather obscure pagan hangover in places outside of Scandinavia. I’m Sweden, however, ‘Sista April’ (the last of April), is no ordinary day in the calendar, especially in the calendars of students in Uppsala and our rival university, Lund.

As soon as you step foot into the university, Valborg becomes as fundamental a part of your new vocabulary as hej or fika or oh god it’s cold. Lecturers rave about it, the Nations begin planning bigger and better festivities, and veteran students reminisce about previous years’ antics. For this reason, the international students who only stay for the first semester feel practically obliged to book a trip back in April, meaning that the city’s once again filled with familiar faces, and the capacity of small student dorms is pushed to new limits. I was lucky enough to have four of my first semester friends to visit, in addition to my boyfriend, who I somehow managed to persuade to return after he’d suffered the coldest day of the year when he stayed in February.

So what is it?

Despite its name implying that the celebration is limited to a single eve of merriment, in its present form students eek out an entire three days to put aside the commitments of studying and sleeping, prioritising instead a host of weird and wonderful traditions.

Skvalborg is the warm-up for the warm-up, a day (and night) of easing yourself into the celebrations, choosing one or more of the nations to base yourselves for eating, drinking, socialising and partying. It’s a bit more low-key than the other days, but there’s a tangible sense of excitement around the city.

The previous evening, my friends and I had won tickets in a quiz to ‘Tirolborg’ at Västgöta Nation, an Oktoberfest-style event with tankards of beer, bratwurst and strudel and a live oompah band. After braving the cold and sitting outside, we cooked together in student accommodation in town, before heading to a very packed Flogsta Party until the early hours.

Enjoying traditional Bavarian sustenance to prepare ourselves for Swedish custom

Due to the previous night’s antics, our Kvalborg began later than intended, as we headed to VDala Nation’s rooftop terrace for food, overlooking the revellers at Upland Nation’s day-club next door. We met with a few friends to recuperate by the river, then out to another house party in the evening.

The big day! Alarms were set intimidatingly early to ensure we could secure a good spot by the river Fyris, for forsränningen – the running of the falls of the river – one of the most established Valborg traditions. An annual feature of Valborg celebrations since 1975, this race pits small teams of engineering students against one another as they attempt to navigate the weirs of the Fyris river on a self-constructed polystyrene raft, modelled on whatever wild imaginings take their fancy. This year’s highlights included a wine bottle straddled by “Frenchmen”, a bathtub and the Hogwarts Express. You can read more about this peculiar tradition here.

The most challenging weir that the rafts have to navigate

After we’d had our fill watching students capsize into the icy cold water, we headed to Västgöta for a traditional herring lunch, consisting of pickled herring, boiled potatoes, hard bread, chives and sour cream (and, of course, singing and snaps).

For the week before the day of Valborg, a countdown is projected on the front of the university library, Carolina Rediviva, marking the moment of the ‘donning of the caps’. At precisely 3pm, the vice-chancellor, watching the crowd below from the balcony, removes her traditional Swedish student cap – an action which is replicated by other graduates, young and old. The white caps were first introduced in Sweden during the 1800s and were used by students to show that they belonged to a student union. Later, they were worn by students upon completion of their high school studies. Paper caps are handed out to students without the real-deal to don, but I borrowed my Norwegian friend’s for the authentic experience.

There’s a choir performance to follow, and then tradition dictates that students move to Ekonomikum Park to drink and listen to music, a quiet and usually civilised space that turns into a post-apocalyptic nightmare once the revellers have left and all that remains are bottles and camping chairs. 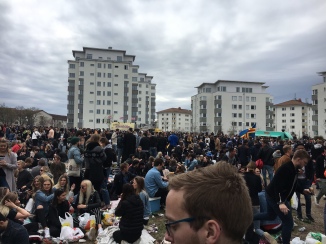 Our Valborg ended queuing in the rain that night for an extortionately priced club, but if you’re really hardy, I hear that ‘Finalborg’ and ‘Katastrofalborg’ are on some people’s agenda. If you can hack another two days and nights of partying, I salute you.