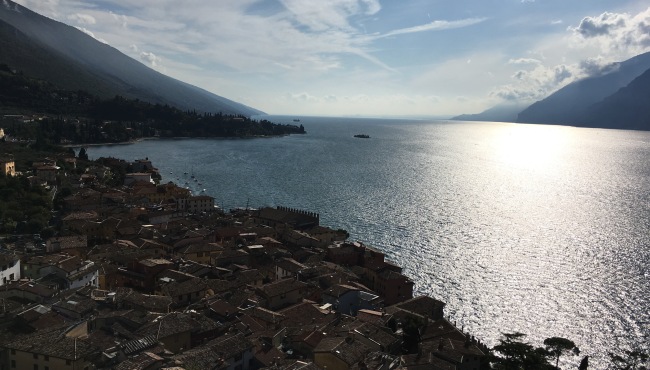 Alongside the attractions of the city itself, one of Bologna’s best assets is its location relative to some other beautiful places in Italy: the famous Tuscan cities of Florence, Pisa and Siena are no more than two hours away; in an hour and a half you can reach the stunning principality of San Marino, near the Eastern coast and not far too from Venice; and, as I found out a few weeks ago, a train and two buses can transport you not just from grand urban architecture to the breathtaking natural landscapes of the Northern Lakes, but also from the bustle of modern city life to a simpler scene from the past – or, at least, from my romantic, escapist imagination that, I think, tends to be enhanced whenever I move from the trees and fields of Warwickshire into a new city. Perhaps it’s fitting, then, that the journey to Lake Garda from Bologna takes you past the town of Mantua, the birthplace of the poet Virgil in 70 BC, who, in his Eclogues, carried the dream of a ‘Golden Age’ defined by nature, simplicity and happiness into a Roman society plighted by political instability and war – though, I’ll admit, my relief was more from the hectic first few weeks of my placement than from the bigger worries of natural disaster and nuclear war in the world right now.

It was thanks to my girlfriend, Jess, that we really saw the full extent of the tranquility that Lake Garda has to offer: the south of the lake, though still beautiful (especially Peschiera del Garda, a little port filled with colourful houses, small fishing boats, Vespas and Fiat 500s), has a big tourism trade, and it was pleasing to leave the theme-parks behind us, replaced by the string of small hamlets dotted along the eastern coast, in one of which Jess had booked a charming Airbnb.

The apartment, in fact, wasn’t on the coast but a 5-minute walk up the mountain, which gave us some lovely views over the lake, even if it meant having to make a painful climb every time we needed to go out: our ‘village’, Castello, was made up only of a church, a pizzeria and houses like ours. It might have been nice to have had a car – but, then again, such a modern commodity wouldn’t have been fitting in our Arcadia. It’s hard to write about such a perfect place without giving a minute-by-minute account of each small thing that we did, from sitting on a jetty watching the boats rock as the sun went down to gliding over the lake with the wind in our hair on the ferry home, but, I think, two things did stand out. 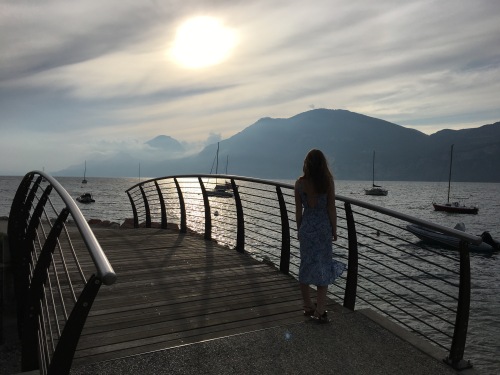 Our evenings eating out were, simply, special: on our first night, we ate at ‘La Trattoria del Captiano’ in Porta di Brenzone, which sits on a pier so that you really do feel as though you are in the lake as you eat. Typically of the area, it is family-run: the mother cooks, the father and sons wait on the tables and the uncle goes out at 5am every morning to catch fish from the lake. We ordered too much food: I’m still not sure whether the portion sizes were too big or whether we shouldn’t have ordered pasta in between our starter and main course… but the fact that we had to roll out of the restaurant didn’t mar the incredible setting and warm atmosphere of the night.

Having thought that this would be hard to top, however, our second night was, perhaps, even more special. This time we took a peaceful 20-minute walk down the gentler slope of the hill to the village of Brenzone and, thanks to the fact that our first choice restaurant was full, we found ‘Ristorante al Vapor’ – right next to the lake and, this time, outside. We both had an incredible set menu of mixed fish carpaccio, salmon pasta, gurnard with caper sauce and chocolate mousse, made all the better by friendly waiters, free aperitivi at the beginning and free limoncello at the end. Safe to say the walk home went quicker than we had feared before we came out.

The second thing that stood out was the town of Malcesine. The town itself is a maze of cobbled streets, gelaterie and tiny squares bordered by locally-supplied restaurants, but it is the castle that steals the show. By some stroke of luck, the weather cleared just as we entered its walls, meaning that, as we climbed the steps first onto a pretty terrace and then to the top of the main tower, we were greeted with views of the lake, the mountains and the rooftops of Malcesine that really did make our mouths drop.

Thankfully for you, I caught most of the trip on video; as hard as I have tried, I’m not sure I’ve done justice to the tranquility and beauty that we experienced on this holiday with my words. I feel almost torn sharing it with you, to be honest, as though I’m giving away our secret hiding place (though I am aware that Lake Garda isn’t exactly a remote island in the Pacific) – but it would be selfish not to give you the opportunity to see for yourself why we fell so much in love not only with the view from the terrace at Malcesine, but also with the whole modus vivendi in this secret paradise in the north of Italy. Between the warmth of the locals, the silence of the single-track roads, the serenity of the lake and the grandeur of the mountains, we found ourselves lost in time and place with no will to find a map nor to call for help, but, now that we’re out, the least we can do is to direct you there too.

I hope you enjoyed my little video tour of Sapienza. My friends and I spent a while filming all the little clips, including parts on the beach in Sicily!

This will be my last post on my year abroad blog. Everyone warned me, but my year abroad went by so quickly. It really feels like only yesterday I posted the farewell picture on Facebook and boarded the plane to Italy. With my final exams over (and successfully passed), I had some time to see all the final bits I wanted see in Rome. Friends came to visit me to celebrate their graduations/my end of exams and together we saw some of Rome’s ‘best bits’. END_OF_DOCUMENT_TOKEN_TO_BE_REPLACED

So my friends and I put together a little video.

It includes a shot of the main entrance of campus, a tour around the Classics faculty, a peek into our museum, and a few student interviews. Enjoy!

Being on an Erasmus year isn’t just about studying. I spent a large chunk of my first semester settling down in Rome, adjusting to life at university, and strengthening friendships with Italians and internationals alike. I did a lot of travelling inside the city of Rome, but I didn’t venture out (apart from to Milan for Christmas). I have more than made up for this in the second semester. I’ll give you a quick summary of a few places I have been and just let the photos speak for themselves! END_OF_DOCUMENT_TOKEN_TO_BE_REPLACED

I had many, many thoughts about what my year abroad was going to be like. It felt like I had imagined every possible outcome of every possible scenario. However, what has actually happened has been something completely different. END_OF_DOCUMENT_TOKEN_TO_BE_REPLACED

Sorry I have been absent for a while. But never fear, now I finally have a break I am getting on with writing a few posts for the hoards of fans my blog has.

So what have I been doing?

END_OF_DOCUMENT_TOKEN_TO_BE_REPLACED

I was drafting a post about the week after exams. My friend, Fiona, came and stayed with me for 46 hours (we only had to buy one transport ticket, bonus) and we visited the entirety of Rome in that time. I also ate more pizza than I ever thought possible, but it’s Italy so why waste the opportunity!? However, I was flicking through my camera roll the other day and I came across quite a few photos I’ve taken of food. So, for a bit of variety and sparkle, this post will be dedicated to some memorable meals I’ve eaten. END_OF_DOCUMENT_TOKEN_TO_BE_REPLACED

I am writing this from the depths of week 8 of exam season. Week 8. Luckily my exam season is 9 weeks long so the end is in sight!

Having been chained to one desk or another for most of the last few weeks, my news is not up to its usual level of Exciting. However, I can now give you an insight into the study set up of La Sapienza university, in case you are planning on coming here for an Erasmus year. END_OF_DOCUMENT_TOKEN_TO_BE_REPLACED

Yesterday (31st January) I went to the Vatican Museums because they have free entry on the last Sunday of the month.

Waking up at what felt like the crack of dawn (it was really 7am but STILL), I met up with my friends and travelled on the metro to Ottaviano, the stop closest to the Vatican. By the time we all got there and met up (Italians usually consider 40 minutes late as ‘still on time’) it was 9am and we were panicking at the length of the queue. The queue stretched all the way around the walls of the Museum and down towards the arches to St. Peter’s Square! All in all, it took us the best part of 2 hours to get to the front of the queue, including a heated argument with a couple who tried to queue jump after we’d spend 80 minutes waiting in line.

The wait was absolutely worth it though. We spent a good few hours wandering around the Museums and finally made it to the Sistine Chapel. Photos of the ceiling were banned, as was talking and standing still. There were security guards at the front who repeated into microphones “NO PHOTO. NO STOP. SILENCE PLEASE.” over and over again.

Rather than explain the trip in great detail, I think a few beautiful pictures of the statues will suffice.

View from one of the windows in the Museums over Rome

END_OF_DOCUMENT_TOKEN_TO_BE_REPLACED

December has been a pretty full month, what with the end of Michaelmas term, Christmas preparation, and the Pope (see more below!).