Another weekend, another big adventure! Last Saturday morning I jumped (ish) out of bed at 7am, bright eyed (ish) and bushy tailed (okay maybe not) and ready to head to Milano! The weather was absolutely glorious, and I really mean that. It was beautiful – we couldn’t have been luckier! We took a train at half 8 to Verona and then on to Milano, arriving at around half 11 with the rest of the day ahead of us! 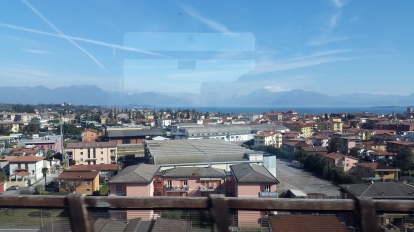 With new Italian friends at university in the city, we had somewhere to stay for the night and ready-made tour guides who took us to the centre and tolerated our shopping spree. After dumping our bags and freshening up at theirs, we headed out on the metro to our first stop – the Duomo. Nothing could have prepared me for the spectacular view awaiting me as we walked up the stairs from the underground. If I remember correctly, the first thing I said was ‘BLOODY HELL’. 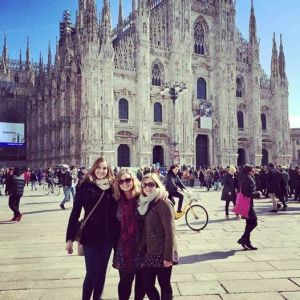 It is honestly one of the most incredible buildings I have ever seen. Many of you will know that I am not religious at all, but that I have a great love for architecture – particularly for cathedrals and churches. It’s hard not to when you hail from Lincoln and spend most of your life in its cathedral! The Duomo is like the holy grail of cathedral architecture and words honestly fail me when it comes to describing it. I will instead just leave you a picture because there is no way I could do it justice. We returned to it later and took a look around inside, even going down into the crypt which was fantastically creepy. 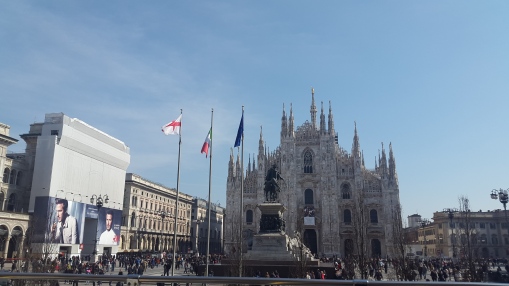 Lunch was potentially a highlight of the day. We were taken down a little road, to find a little family run shop with a queue coming out of its doors and heading halfway down the road – always a good sign! We were told that we were about to eat one of the best foods Milan had to offer – Panzerotti. The best way for me to describe it would be to say it’s like a tiny little calzone. With both savoury and sweet fillings on offer, it looked like heaven in pastry! We all had ours filled with tomato and mozzarella and they were to die for. 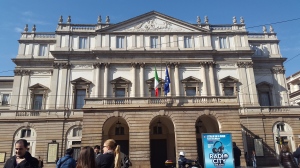 So worth the extra hour needed in the gym! We sat and ate them overlooking La Scala theatre before heading into the Galleria Vittorio Emanuele II which is a shopping arcade (but more Prada than Topshop) with a magnificent roof of glass and iron a

nd a small quirk we were there to see. On the floor of one particular part of the Galleria is a picture of a bull with a dip over its balls. This dip has been worn into the ground by countless heels from countless people, as apparently, if you put your heel in there and spin three times clockwise it’s good luck. We waited ages for our turn but gave it a whirl (get it?) and I suppose I shall now just wait for my good luck to appear. Such fun!

Of course, you cannot visit the fashion capital of Italy and not take a bit of time out of your day for some shopping! After some amazing gelato, we made our way in and out of busy shops whilst I commented on how lovely the window boxes on the building opposite were (I’m not the biggest fan of shopping…). I did make two purchases, both very practical of course, a travel wallet and a lovely little bag. Mission accomplished!

Our next stop was the Sforza Castle, the name of which took me back to endless evenings watching the Borgias on tele – I knew historical dramas would come in handy one day! It’s a very impressive castle – huge, largely still intact and gorgeous when lit up at night! After a walk around the park behind the castle, we headed out (joined by more Italian’s – friends of the guys) and had an ‘Apericena’ which was drinks and a spot of dinner in another part of the city. Chatting and joking with everyone in Italian was great fun and by the end of the day, I already felt like I’d seen everything Milan had to offer! 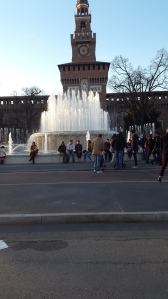 On Sunday morning, we took a city sightseeing bus tour around the city. It lasted and hour and a half and gave some really interesting information and anecdotes about the city and allowed us to see the parts we missed on Saturday. 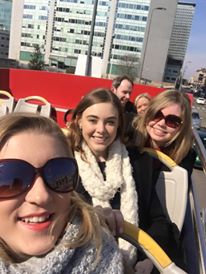 The tour was one of my favourite parts of the weekend in fact! I absolutely loved Milan, and it continues to surprise me that so many Italians I speak to here say that they hate it! It has a fantastic mix of gorgeous, old architecture and new, more modern buildings and areas which make it a city which I could actually see myself living in. Who knows what the future may hold?!