As I sip my first cuppa since I’ve been in Canada I’m thinking of home and thinking that I should fill everyone in on my first week! (Yes, it’s been a week and a half since I last had a cup of tea.)

For friends and family who may be interested, and anyone looking to go abroad on their own, I have just a quick word of reassurance for when you find yourself in JFK, in tears, with no baggage and a travel itinerary in tatters. Due to floods(!) in the baggage area of JFK, I missed my connecting flight to Toronto and a subsequent bus to Kingston. The airline wanted to put me on a flight 5 hours later and the panic set in as I realised I was facing a night in either JFK departure lounge or Toronto arrivals before I had any way of getting to my destination, 3 hours from Toronto. I’m not a confident person, but in that situation you gain the sudden ability to argue your way into a bus to Laguardia where you can get a flight in just two hours. Followed by the fastest I’ve ever run in snow boots, I made it to a second bus and finally arrived in Kingston 22 hours after leaving home. It’s no lie that my range of emotions during those hours spanned from dread to fear, panic, loneliness, stress, contentment, jubilation and eventual exhaustion (as the erratic texts to my parents confirm). 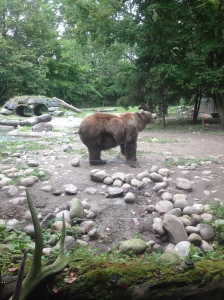 Here’s a bear to cheer the mood up

And so to anyone reading this who is hoping to travel on their own soon I say that all you need to do is trust your ability to overcome, even when all your plans are ruined and nothing seems to go in your favour, just keep going because you will sort it out. People are often awkward and unhelpful so help yourself by staying calm and keeping a level head. If things go wrong focus only on the next step of your journey, as long as it gets you closer to your destination you’re making progress. Trust me when I say there is nothing in the world more satisfying than reaching your new home and a soft bed knowing that no matter what you face in the next few months, you’re already hardened enough to deal with it. I recognise I’m probably bitter, and that many other exchange students have very smooth journeys, but the confidence now I have in my ability to deal with unforeseen circumstances is actually a very shiny silver lining. 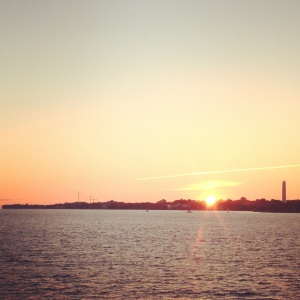 As for my first week in Kingston, it was certainly worth persisting with the journey for! The exchange students at Queen’s had a separate orientation week planned for us with activities ranging from an evening meal at Fort Henry with a beautiful view over Kingston and Wolfe Island, to a paint party involving orange jumpsuits and litre upon litre of Tricolour acrylic paint! It would take far too much of your time to outline to you everything I have done in the last week so instead I have added a few pictures and I will just say that I loved absolutely all of it. The next time I blog I hope to have seen more of Queen’s, Kingston and Canada so I’ll be able to paint a better picture of where I am and how I’m settling in. Very sorry that my first blog has been focused on my woes rather than the great times I’ve had here so far, but I feel it important to offer advice to people who find themselves in similar situations to me. You shall all just have to trust me that, so far, I love it here. 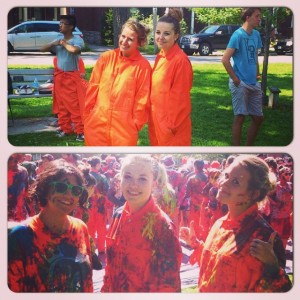