That’s it then, I finally waved goodbye to my Canadian home just a couple of days ago. The last few days were a hectic chaos of packing, unpacking, repacking, saying goodbye to European friends I’ll see in the not too distant future and Canadian, Brazilian and Australian friends who I’ll have to wait longer to be reunited with. With all the chaos it was easy to be distracted from the fact that I was about to leave Kingston and Queen’s for good! 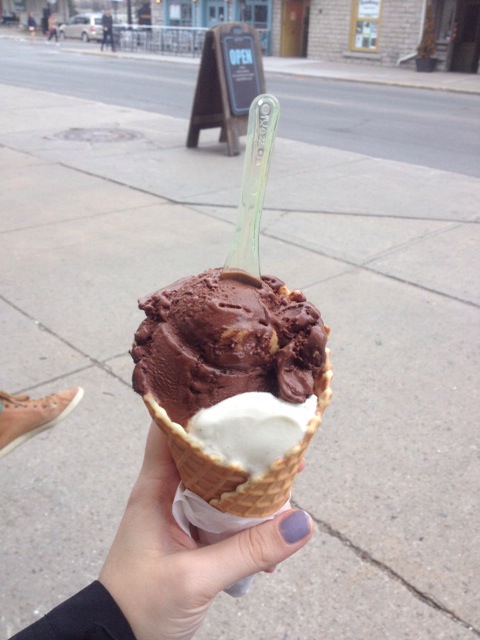 It’s just as well I didnt discover Mio Gelato until the last week of term!

END_OF_DOCUMENT_TOKEN_TO_BE_REPLACED

Last week I had an end of year dinner for Common Ground (CoGro), the coffee shop on campus I started working in back in October. I’d never really thought of it as any more than a job when I applied, but I realised last week that I’ve made a whole family of Canadian friends and had a really great time working on campus. I’ve never worked during the Durham term time so I didn’t know if I’d be able to juggle a job alongside academics and, of course, the exchange travel attitude. I knew, though, that exchange would involve a lot of travel, and gigs and weekend trips and meals out and shopping in North American shops that we don’t have in England, so I applied for CoGro back in September purely as a way of earning some serious dollars to be able to eat. As an exchange student you’re given priority at the first stage and guaranteed an interview because you can’t work out in the town on a student visa, only on campus. The interview was very scary and very different to interviews I’ve had in the UK. It involved five managers, sitting across the largest desk you’ll ever see from little old Beth with the funny British accent.

END_OF_DOCUMENT_TOKEN_TO_BE_REPLACED

Last weekend the Queens International Centre took all the exchange students to a local maple syrup farm. We saw tree tapping and ate pancakes and played in the snow. 6 months ago those three activities in quick succession would have probably tipped me over the edge into incomprehensible levels of excitement, but that’s life now. I ‘play’ (debatable, most days I wake up and tut at the Canadian weather when I draw the curtains and have to get to work by 7.30am) in the snow most days of the week and I eat pancakes at least twice a week. Going to the maple farm showed me just how Canadian my life has become. I wear my plaid and denim, I unzip my coat at the tropical temperatures of -3 and I say ‘eh?’ after most sentences.

END_OF_DOCUMENT_TOKEN_TO_BE_REPLACED

What a hectic couple of months! I’ve been non-stop travelling and sight-seeing since I returned to Canada after the Christmas break. First came a ski weekend north of Quebec, one of the most terrifying things I’ve ever done in my life, but then again I was never one of the 5 year old skiing pros you see cruising down black runs! Next came a weekend away at ‘winter wonderland’ with the Queen’s University Outdoors Club. We took over a resort in rural Ontario, staying in sweet little cottages with open fires. We cross-country skied (less terrifying than downhill skiing, but probably because I spent less time flying down mountains at worrying speeds and more time on my bum), snow-shoed and skated on a frozen lake, made ‘s’mores’ by a campfire in the snow and just generally had great fun tobogganing and reliving our childhood winters.

END_OF_DOCUMENT_TOKEN_TO_BE_REPLACED

Over the Christmas break I took the unusual decision within the exchange community to go home for the holidays. Whilst my friends from here in Canada headed off in the respective directions of Las Vegas, New York, Washington and Cuba, I hopped on a plane to old blighty. I had a really wonderful Christmas at home, seeing family and friends and enjoying the Christmas traditions England does better than anywhere else in the world. END_OF_DOCUMENT_TOKEN_TO_BE_REPLACED

I’ve had a huge amount of adventures since my last blog post! Subsequently this post will have no unifying theme whatsoever, other than ‘things Beth has done recently’.

END_OF_DOCUMENT_TOKEN_TO_BE_REPLACED

Last weekend I had the most Canadian weekend you could ever imagine!
Queen’s University have an Outdoors Club who run trips all year round to a number of parks in North America to give members a real Canadian adventure. This time the trip was to the Algonquin Provincial Park, where the leaves are the most vivid shades of red and orange at the moment – the scenery was beautiful! The park is full of completely still lakes and quietly flowing rivers, and the whole weekend we saw only 4 or 5 other humans who weren’t in our group! What we did see lots of, though, was chipmunks! They were everywhere! Of course I really wanted to see a moose; Although apparently it’s the height of the mating season at which time they’re even more dangerous to humans than bears!

END_OF_DOCUMENT_TOKEN_TO_BE_REPLACED

As I sip my first cuppa since I’ve been in Canada I’m thinking of home and thinking that I should fill everyone in on my first week! (Yes, it’s been a week and a half since I last had a cup of tea.)