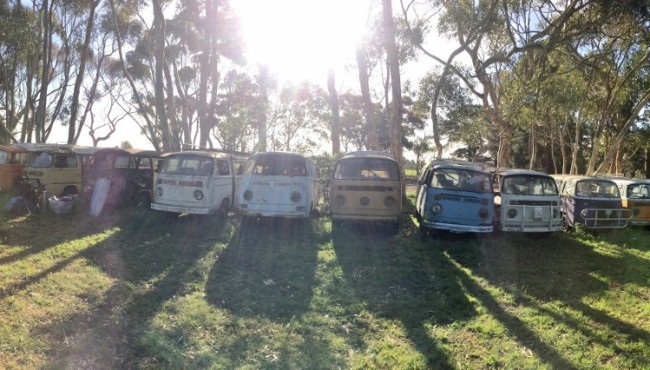 You might say in your application that your Year Abroad is all about expanding your academic horizons, but we all know that one of the main reasons for applying is to indulge in your wander lust (and possibly fit in another year of career procrastination). Once you’ve caught it, there’s no denying this addictive travel bug, and a road trip is the one of the best ways to embrace it!

Here’s five reasons for choosing a road trip for your next adventure:

Here in Melbourne we are lucky enough to have a bucketful of road-trippable options, from nearby Mornington Peninsula, Phillip Island and Wilsons Prom all the way to Canberra or Sydney. However, there is one stretch of road that surpasses all others (it’s in the name): The Great Ocean Road. Beginning at nearby Torquay and stretching west to Allansford, it’s 243km of Australian National Heritage listed coastline. 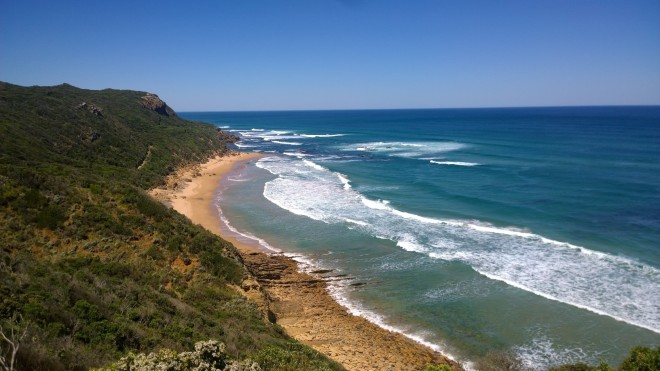 Packed with world-class surf beaches, stunning rock formations and verdant rainforest, the Great Ocean Road is a hugely popular destination. The ‘must do’ iconic sights like the Twelve Apostles, London Bridge and Loch Ard Gorge feature a constant stream of tourists (and rightly so – they’re stunning). However, these are five lesser known gems that get you away from the crowd, and make this trip even more memorable:

Despite all the awesome upsides of road tripping, there are a few drawbacks: the cramped space and the long hours on the road, for example. So lastly, here’s my five top tips for surviving your ultimate road trip in (relative) comfort. 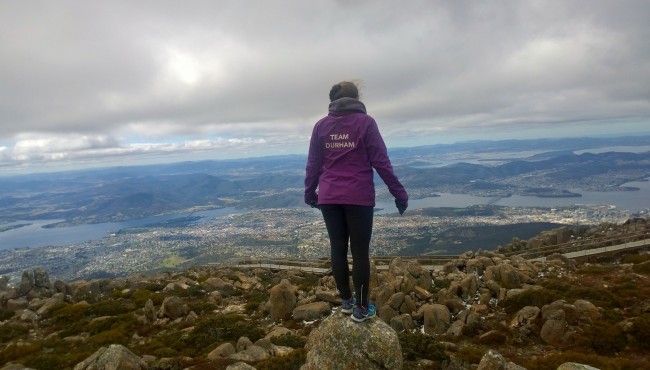 Tasmania presented an ideal travel spot for the September spring break at Melbourne uni: far enough that it justified a plane journey, but not so far that half the holiday would be spent travelling.

I had no idea what to expect, although a relative had told me the landscape is like a cross between Australia and New Zealand, and now I can totally see why. Tasmania has a gorgeous blend of rugged land right alongside beautiful beaches and crystal waters. Here’s seven highlights doubling as reasons why you should make the effort to visit this far-flung corner of the world!

Number 1. The views from the plane 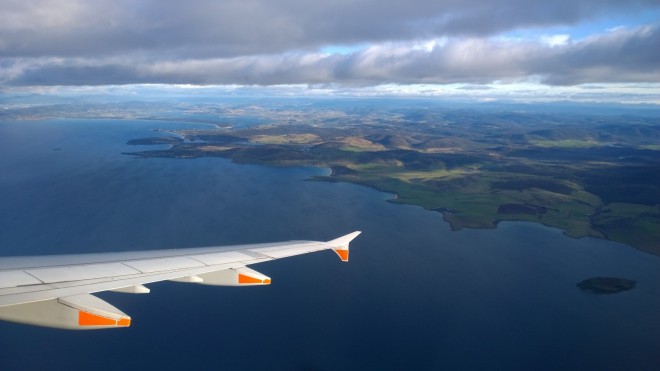 The plane takes less than an hour from Melbourne, but if you get the chance, grab a window seat. Our flight was at 6am, so we were all a little bleary eyed getting on, but the views at the other end are well worth it. I couldn’t think of a better way to start the day. 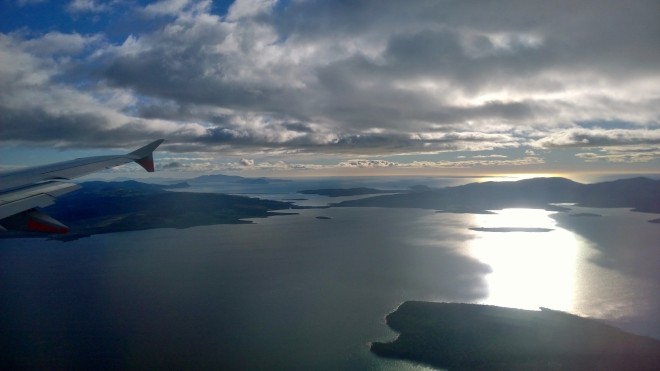 The sunrise over the Tasman coast made the early morning start worth it.

Number 2. The city of Hobart

Hobart, Tasmania’s capital, is a gem of a city. It’s built on the Derwent River just below Mount Wellington, so it’s almost as hilly as Durham. It has a population of approximately 225,000, making it Australia’s second smallest capital, although it is also the second oldest (after Sydney). 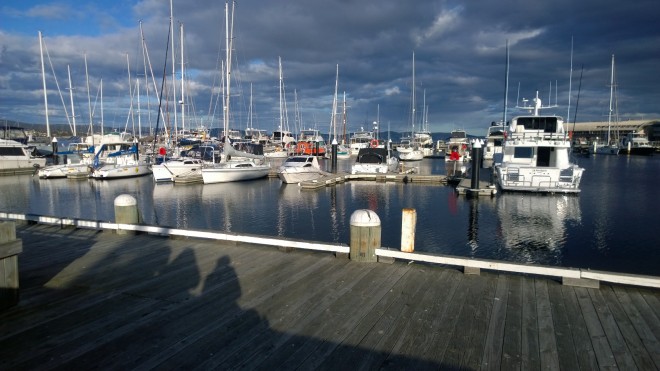 There are some really lovely neighbourhoods – the harbour and Salamanca, where they hold a huge market every Saturday, are a few of my favourites –  and the city is full to bursting with cute cafes and galleries. Try out Daci & Daci, a delicious bakery. If you’re looking for a cheaper option for dinner, the harbour has floating fish and chip shops where you can try the ultra-fresh catch of the day. 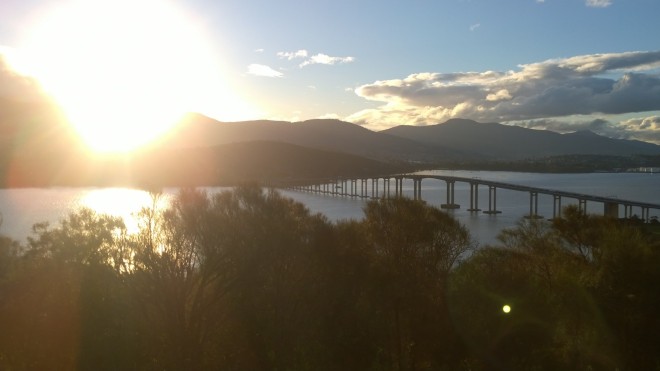 Sunset behind Mount Wellington, looking over the Derwent River toward Hobart.

By many local accounts, MONA (Museum of Old and Modern Art) is what put Hobart on the tourist map. It is the largest privately funded museum in Australia, and described by its maker, David Walsh, as a ‘subversive adult Disneyland’. 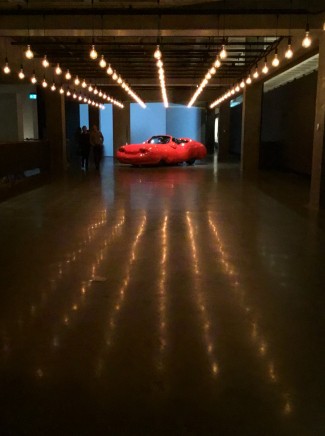 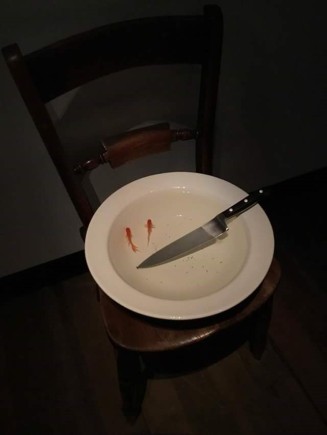 To say some of the exhibitions are controversial is an understatement. Pictured are a few of my favourite (and less controversial) pieces: above, a ‘fat car’ lit by lights that mimic your heartbeat and a bowl of live fish; below, an ancient mummy and its CT scan, revealing the 2000 year old human remains encased inside. 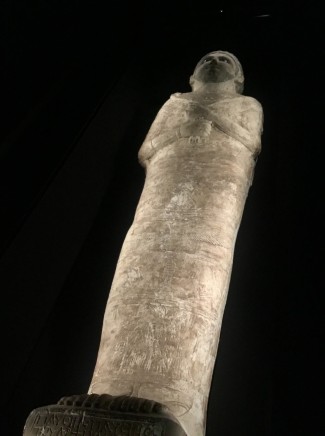 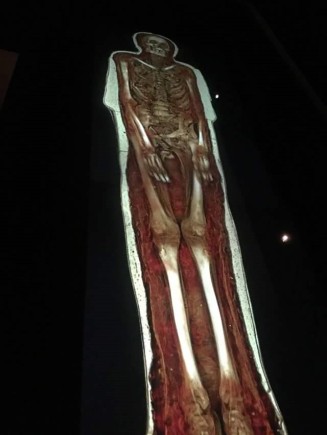 You can have a closer look at MONA’s work on their website: https://mona.net.au. All of their exhibits pose the question, What is art?

Hobart was set up in 1804 as a penal colony, and Port Arthur was a convict settlement on the Tasman Peninsula, 60km from Hobart. It is now an open-air museum and one of Australia’s most significant heritage sites. The ruins of the of the penitentiary – including solitary cells, an asylum, hospital, and officer quarters – are remarkably well preserved, and offer a unique insight into Australia’s history and the era of British colonialism. 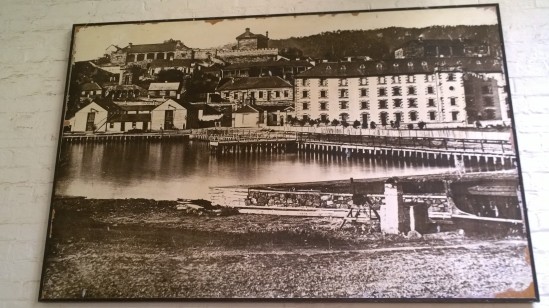 An image of the penitentiary in the times of convict settlement… 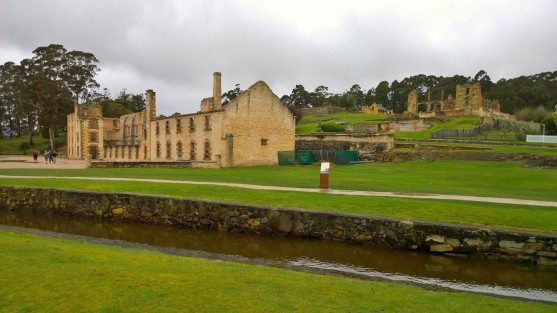 …versus the penitentiary as it is today.

The site is vast, and eerily beautiful. The grand red buildings and English-style gardens seem completely at odds with the bleak history of convict incarceration, torture and exploitation. Port Arthur was also the site of post-colonial Australia’s worst mass murder, and there is a memorial to commemorate the victims. It is both a sobering and an enlightening visit. 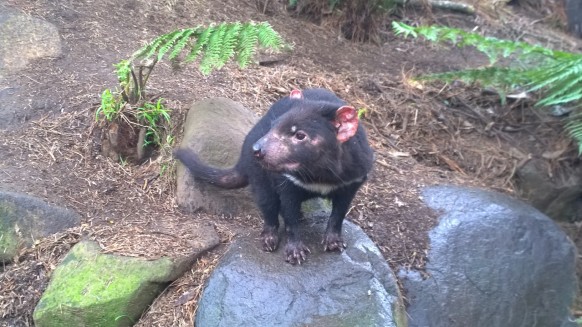 Do you need more of an excuse to visit Tassie than to see these little carnivores? Endangered and elusive in the wild, you can glimpse the native Tasmanian animal in enclosures that mimic their natural habitat at places like the Tasmanian Devil Unzoo. Plus you can fulfil your Australian dreams of hand-feeding kangaroos and wallabies. 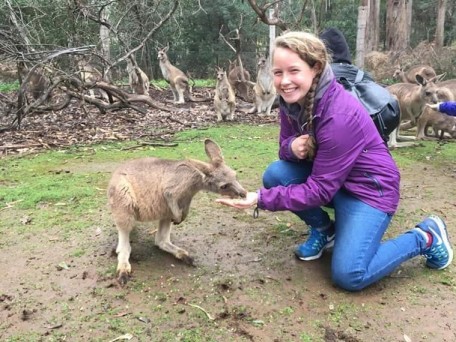 Weather in Tasmania can be a tad more unpredictable than mainland Australia on account of being even further south, but no matter what the weather the national park on the Tasman peninsula is worth a visit. Towering sea cliffs and arches make for gorgeous coastal walks, and even if it is drizzling (like it was for us), the views will be littered with rainbows. 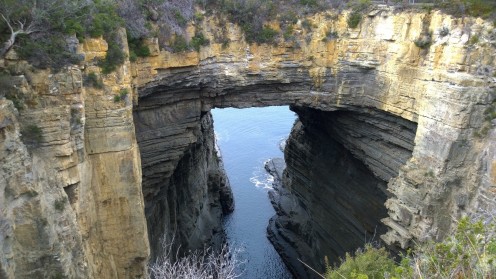 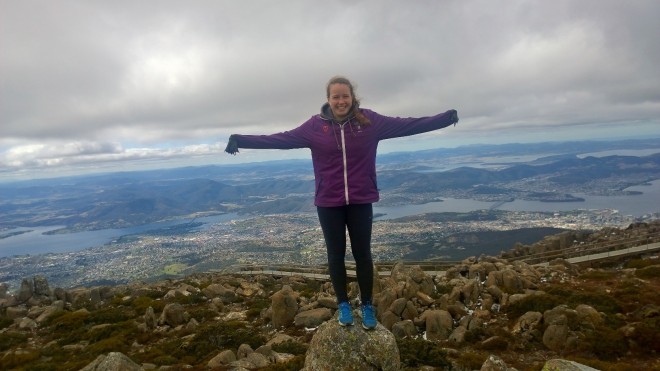 Team Durham makes it across the world

Mount Wellington looms over Hobart, and the top provides stunning views over the city, river, and out to the Tasman peninsula and the coast. Although you can get bus tours to the top, I would highly recommend taking the time to hike the mountain. The top will feel that much more satisfying (and saves you a bit of cash!). The path up is rocky and steep near the top, but more than manageable, even for unseasoned hikers – we did it in trainers. Plus, what could be better than snowball fights at the summit? 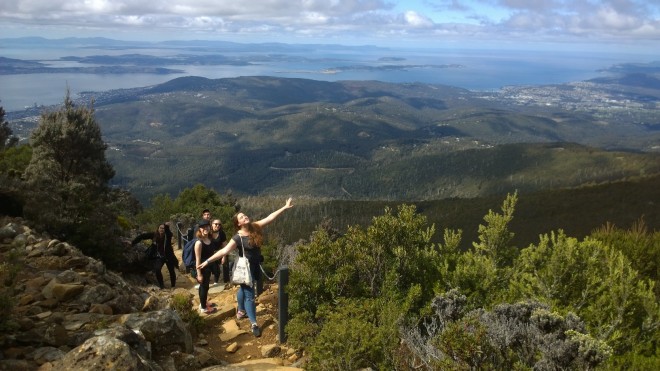 Fellow exchange students Alice,  Megan, Emma, Jem and Rita on the hike up

These were a few of the highlights of our four-day trip to Tassie, but there’s loads more I’d like to go back for: in Hobart alone, the Cascade Brewery (Australia’s oldest brewery), Cascades Female Factory (convict workhouse), and the Botanic gardens are popular sites; further out, places like Bruny Island, Wineglass Bay, and Cradle Mountain offer pristine natural beauty. If you take the time to get here, Tasmania will pay you back in full! 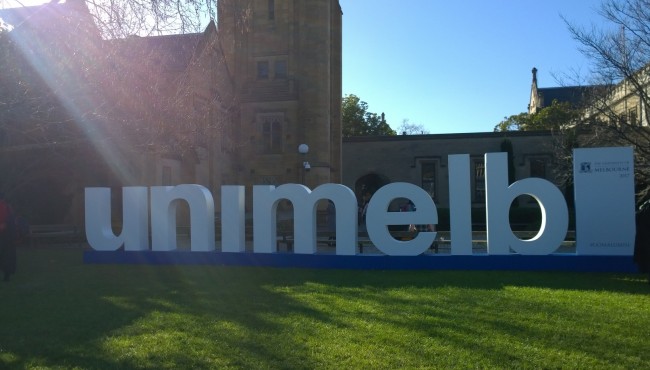 One of the biggest changes on my year abroad has been moving from a wee university town, to a campus university which is only a small part of a much bigger city. Next blog I’ll tell you about the city, but for now I want to talk about the real reason why I am here on my year abroad… The University of Melbourne!

Here’s a list of some important factors for choosing your year abroad university – and how mine reflects! END_OF_DOCUMENT_TOKEN_TO_BE_REPLACED 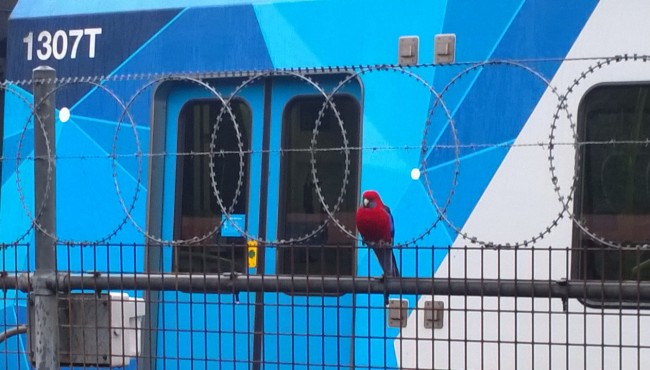 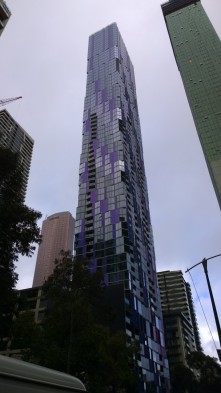 Despite an inauspicious arrival, in the first month that I have been here, I have already started to fall in love with the amorphous, evolving city that is Melbourne. From its striking architecture (my favourite so far is a palatinate purple high rise) and wide, American streets to its graffiti-filled laneways and edgy bars, the city is full to bursting with character, style and taste that is entirely its own. I won’t tell you too much about it just yet – I’ll save the city introduction until a time I can act as a true Melburnian guide – but these are a few impressions that stood out to remind me I was no longer in Britain, or even the northern hemisphere for that matter. END_OF_DOCUMENT_TOKEN_TO_BE_REPLACED 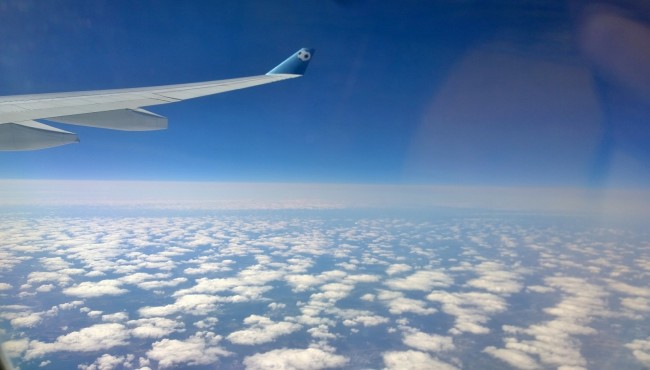 Greetings, or more appropriately, g’day mate! Welcome to my blog, in which I will try to record the next twelve months as I move from small town Durham to the thriving metropolitan capital of Australian culture. It has been little over a week since I touched down here in Australia, on the other side of the world, and in a sense the UK already seems much more distant than twelve days away. END_OF_DOCUMENT_TOKEN_TO_BE_REPLACED