Sitting at my desk on this sunny Swedish morning, it feels bizarre having to acknowledge in print that I’ve actually gone and ‘done it’. After so many months of administration, planning and dreaming, I’m here, in Sweden, embarking on the adventure that had once seemed so illusory.

Pre-departure nerves…mainly stemming from the thought of having to navigate a bus, two trains and a flight with 50kg+ of luggage.

The past ten days have been surreal to say the least. I had a hectic start to the trip, having nearly missed my transfer to Uppsala after our plane was diverted to another airport in Sweden, due to a drone in Arlanda’s airspace preventing us from landing. Since then, things have run a little more smoothly. I moved into my accommodation in the (in)famous Flogsta (more about that later…), and immersed myself in the orientation week programme, organised by the university for international students. I’ve toured the city numerous times, visited the bars and beer gardens of many of the student ‘Nations’, hiked to the city forest and a Viking burial mound and eaten my body weight in cinnamon and cardamon buns. Fair to say, the honeymoon period has been exploited to its full potential! 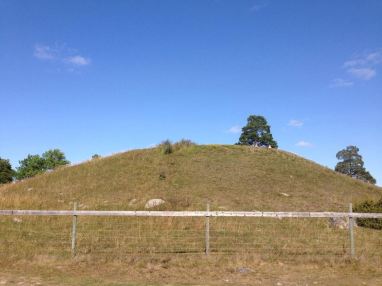 A Viking burial mound in Gamla Uppsala. Definitely not just a grassy hill.

On Wednesday, new international students were invited to the university’s Welcome Reception. Having experienced matriculation in Durham Cathedral, I felt that the bar had already been set pretty high, so my expectations weren’t particularly great. Little did I know, however, that Uppsala’s University Hall is a tourist attraction in its own right. Wikipedia informs me that it was designed in an ‘Italian renaissance Beaux-Arts style’, but all that I was aware of was that I probably should’ve dressed for the occasion. The exterior is suitably grand and imposing, but once inside, the decor is seriously impressive. Classical statues line the gallery, the ceiling is ornately gilded and chandeliers practically drip gold… We were seated in the Grand Auditorium for the reception, and received addresses from the University’s vice-chancellor and Uppsala’s mayor, as well as hearing the Royal Academic Orchestra in concert. It was an incredible experience, and one made even more special by the fact that the building has only recently re-opened after a period of renovation. 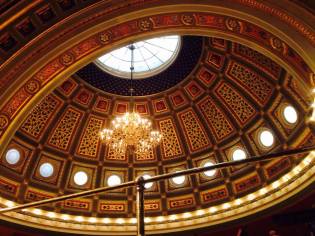 This week, I’ve also had the amazing fortune of being able to spend some time with my parents, who, by complete coincidence, had booked a holiday to Sweden before I’d even applied to study abroad. This link to home was much appreciated whilst settling in to a new, and occasionally lonely, environment. It also meant that I had access to a car, enabling the obligatory Ikea shop, as well as allowing me to travel a little further afield within this country which I’m calling home. On Wednesday, we drove to Sigtuna, officially the oldest town in Sweden and a paradise for historians, with its ruined churches and numerous rune stones nonchalantly displayed around the streets. 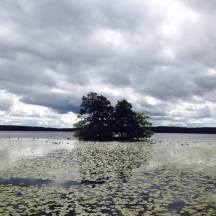 On Thursday, Dad was adamant that we travel to the coast for the sake of being able to say we’d dipped our toes in the Baltic sea, so we drove to Öregrund, a small fishing town popular with Swedish holidaymakers in the summer months. Although the water was icy, it felt like the closest I’d come to a summer’s day  in my time here, as we sat in the sun on the rocks and gazed out across the sea. 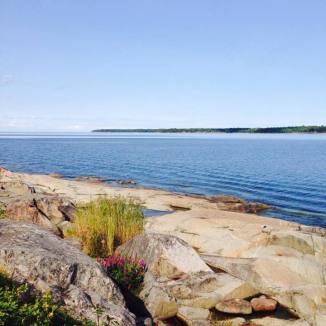 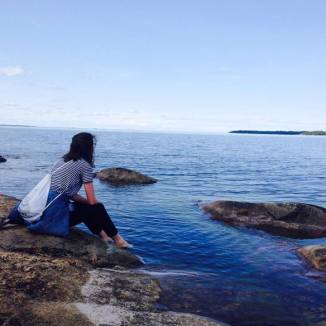 That’s another thing about Sweden that no one had told me. I was prepared for the onset of long dark nights, harsh cold winters and general miserableness outside of the summer months, but what I hadn’t anticipated was the severe unpredictability of a Swedish August. If it’s grey and damp in the morning, you may as well anticipate glorious sunshine in the afternoon. If you awake to see the sun shining, you’ll regret not packing an umbrella, scarf, and extra jumper for a few hours later, and then sun-cream for a few after that. Walking around town, it’s not unusual to see someone in shorts and a t-shirt chatting to a friend wrapped up in a thick coat, donning hat, scarf and gloves. Utterly bizarre, and an unexpected nuisance. Dressing myself has never been more of a challenge, and I’ve a feeling that, by the time I’ve figured it out, summer will be well and truly gone. After all, as the locals love to keep telling us, Winter is coming…

I’m really excited to see what the next few weeks have in store for me. My classes don’t begin until 7th September, so I’ve time to really find my feet and explore the city properly in the coming days. Thanks for checking in, until next time – ha det så bra!

2 thoughts on “A home from home: setting up and settling in”