We finally arrived in Argentina after a nine-hour train, a 40-minute walk across the Bolivian border (more on that drama later), a six-hour bus and four days’ worth of dirt accumulated from not showering in the Uyuni Salt Flats. We were excited to be back in a larger and more modern town, to be warm and mainly to shower! Salta is a perfect place to relax as it is really picturesque and laid-back, especially around the main square, which was our favourite spot. The bus journey through the north of Argentina is also stunning as you drive past different rock formations such as the Quebrada de Humahuaca, pictured below. 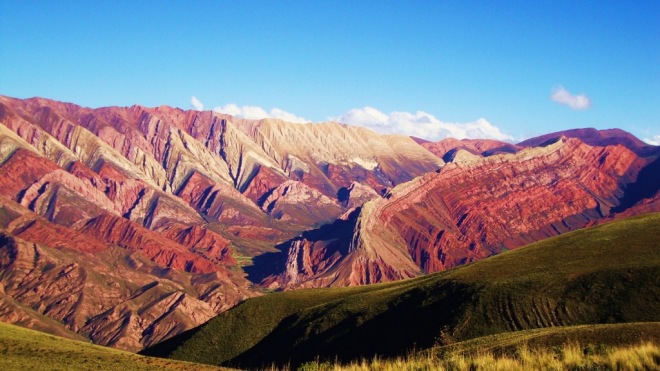 A small dusty town with a big emphasis on wine, it’s no surprise Cafayate has been one of my favourite destinations to date. Everything we did during our two days here shamelessly revolved around eating and drinking: a tour of the Nanni winery, drinks at an artisan micro-brewery, tasting of Malbec and Torrontés wine-flavoured ice creams, lunch at Casa de las empanadas, which took our empanada tally for the trip up to a grand total of 50 and two consecutive evening meals at hands-down the best parrilla (steak) restaurant I’ve ever been to. Just a short walk away from the main square, you can get different cuts of meat for as cheap as £4.50! 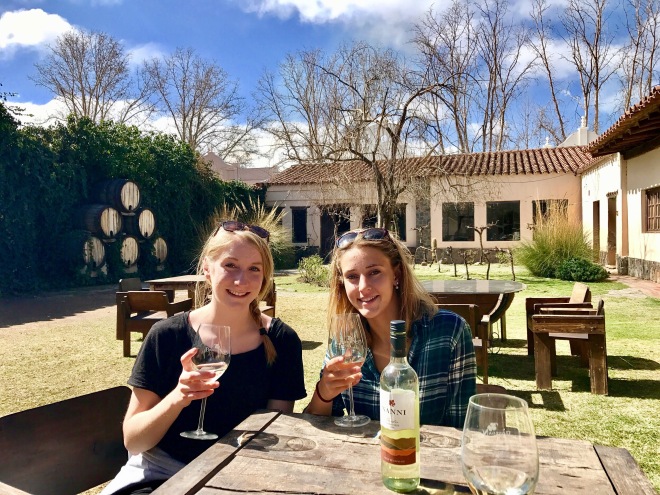 Argentina’s second city has a small-town feel thanks to its many pedestrian areas dotted around the old town and its friendly inhabitants. After exploring the art scene along Paseo del Buen Pastor, we walked to Parque Sarmiento to the south of the city, where we noticed for the first time so many Argentinians walking around with flasks and drinking mate, a caffeine-rich infused drink, equivalent to a good ol’ cuppa in the UK.

Often referred to as the ‘Paris’ of Latin America, the resemblance to the French capital is uncanny: wide avenues and fancy apartment blocks, elegant cafés and restaurants on every corner and chicly-dressed porteños minding their daily business. One thing that struck me about Buenos Aires is HOW large it is; with roughly 3 million inhabitants clustered around the heart of the city and approximately 15 million spread across the province, it would be foolish to rush your visit here.

On our first day we visited the San Telmo area which has a market selling everything from fresh fruit to eclectic antiques. We also saw some street tango before heading to La Boca, a neighbourhood known for the Caminito, a quaint yet touristy street lined with brightly coloured buildings, arts and crafts and street performers.

On our second day, Alice’s friend who she had met on her year abroad in Spain, Estefania, showed us round her local neighbourhood, New Palermo, and the surrounding parks such as Parque Tres de Febrero.  After lunch in one of Buenos Aires’ mainy authentic Italian restaurants, we visited the Evita museum which exhibits the life of Eva Perón, the First Lady during Perón’s dictatorship starting in 1946. It was interesting to discover more about her life after learning about Perón in one of my favourite modules in Chile. We finished our day at the MALBA museum, which promotes Latin American art.

Day three began in an unconventional manner, with a visit to the cemetery in Recoleta, where famous celebrities, including Eva Perón herself, are buried. The surrounding upper-class area is also worth exploring: the Recoleta cultural centre had a great temporary exhibition called ‘expanded images’ which had distorted 3D photographs of cities and impressive landscapes, El Ateneo Grand Splendid is an old converted theatre which was voted the second most beautiful bookshop in the world and the Floralis is a giant mechanical flower which is designed to open and close throughout the day according to the sunlight. 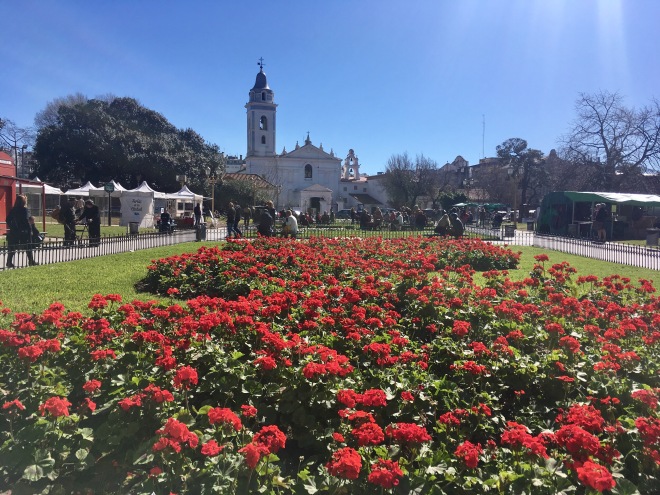 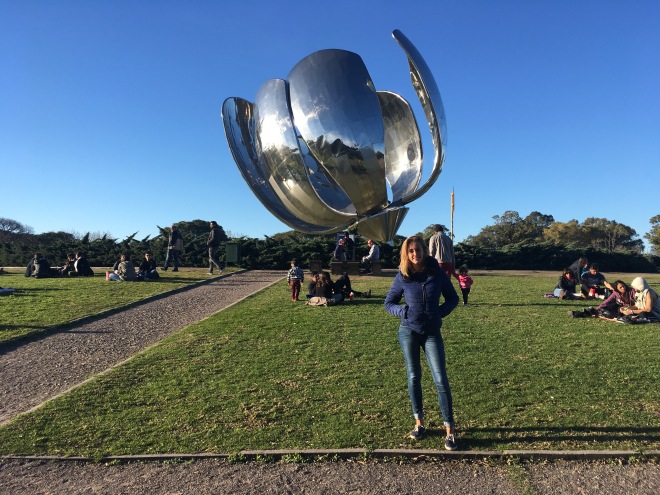 Our last full day in BA coincided with a march organised by the CGT (a national trade union). Consequently, all the roads in the centre were blocked off and crowded with thousands of workers protesting against job cuts. We started off our sight-seeing tour of the centre on Avenida 9 de Julio, the widest avenue in the world, and made our way past the Obelisk, to Plaza del Congreso, and then to Plaza de Mayo, where the presidential palace, la Casa Rosada, is located. This also seemed to be the route the protesters were taking, up to the government seat, so we definitely saw Buenos Aires at its fiestiest. It was only when we walked down to the port, Puerto Madero, that the city seemed to quieten down.

We had always planned to take the ferry from Buenos Aires to Colonia del Sacramento and Montevideo, Uruguay’s capital. Up until then, over a month of travelling had run seamlessly… at some point, something had to go wrong. We turned up to the port early at 7am and queued up for check-in. The woman took our passports away, talked to a colleague and came back to inform us we couldn’t board the ferry. The reason? We didn’t have entry stamps for Argentina so we were ‘illegally’ in the country, despite having gone through both Bolivian and Argentinian border control upon exiting Bolivia. We’d have to go to the Ministry of the Interior to get stamps and get a later ferry (and pay for new tickets since ours were non-exchangeable). Reluctantly, we trudged over to the ministry and were directed to the migration desk manned by two sour-faced women. We began explaining the misunderstanding, in our finest Spanish, only to be greeted with accusations of running across the border illegally. What an image- us three running across the border with our massive backpacks – doesn’t seem likely! After two and a half hours of trying to reason with them and even phoning the British Consulate for support, we realised it was hopeless and if we didn’t want to lose money on accommodation that we’d already booked in Uruguay, we would have to cough up the 3000 peso fine (£135 each). At least we finally got to Uruguay later that day…

Warning to readers- Colonia is expensive!!! In my opinion it’s still worth going to as it is a very peaceful place (we needed to unwind after our hell of a morning) with its charming cobbled streets, the old lighthouse, spectacular sunsets by the sea and great food, including more steak, mixed grills, and chivitos, typical Uruguayan sandwiches layered up with beef, ham, bacon, cheese, tomato, lettuce, egg and other optional toppings. 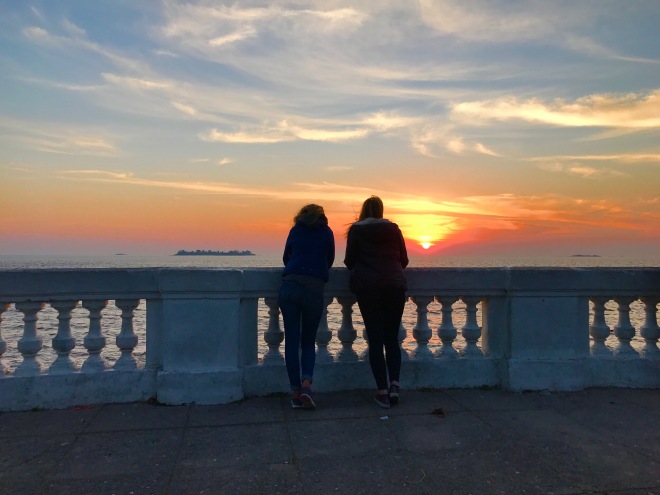 Walking around the Uruguayan capital, you feel as you could be in a Spanish city or any modern European city! The old town towards the port is especially nice, including the old market (where we had Jack’s long sought-after mixed grill). Our second day in Montevideo was the first time it rained since setting off but it didn’t stop us enjoying the day and finding shelter in some cute cafés.

Our last stop in Argentina was the national park of Iguazu Falls, which is located right on the border with Brazil and Paraguay. For me this was the most impressive view of the trip so far, and pictures describe it better than I ever could in words… 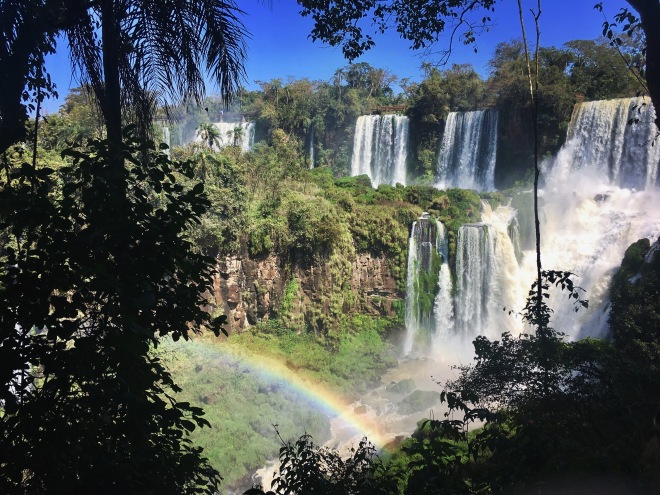 In the splash zone

That’s all from Argentina for now, Brazil is calling x