After showing my home-town bestie Alice around the city I’ve called home for the last five months, and a heavy-hearted final goodbye to Santiago, our true backpacking adventure began in La Paz. Due to extensive research on all the horror stories and scams that tourists get tricked into (fake policemans and tourist officials, street violence, kidnappings and the phlegm scam to name a few), it’s fair to say that we arrived in Bolivia’s chaotic capital with our money belts securely fastened and a distrusting attitude. To overcompensate, we stayed in the Wild Rover, the city’s self-proclaimed (and indeed well-deserving) party hostel for gringos. As soon as you set foot into the building, it feels more like a Durham college on the night of a big social or formal rather than cheap accommodation in the heart of La Paz. Whilst it’s far from an authentic Bolivian experience, it’s great fun to meet fellow llama-jumper-clad backpackers and make the most of the affordable British pub-grub served in its bar (I had long been craving a cottage pie!) 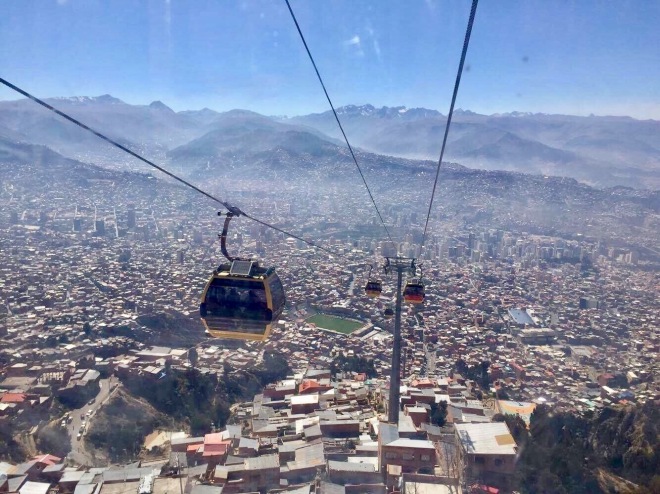 We didn’t stay in the city for long but we managed to cram in a lot of the main sights: the cable car which extends across the sprawling valley, and is the city’s quickest form of transport, the San Pedro prison, which is famous for being ‘self-run’ by the prisoners themselves, the main squares, Plaza San Francisco and Plaza Murillo and Mercado de las Brujas, the Witches’ Market, which is perfect for a spot of souvenir shopping. We walked around undisturbed and felt reasonably safe the entire day; it was only upon checking out that we were brought back to reality, when a panic-stricken girl stumbled into reception teary-eyed murmuring about a group of bogus policemen who had forced her to handover all of her money, cards and phone.

By far my most unforgettable experience in La Paz was Death Road. Officially called Yungas Road, this 65km stretch of rocky track is notorious for its historically high death toll. In the past, vans and trucks would speed along in both directions along sections too narrow for both to fit, until one inevatibly and tragically fell off the cliff. Nowadays, the road is almost exclusively used by tourist groups and the casualties have fallen from approximately 300 per year to 18 cyclists in total since 1996. Not one to leave things unchecked off her bucket list, Alice roped me into participating despite my fear of cycling. I actually really enjoyed the first section leading up to Death Road (no surprise as it was an easy downhill section of tarmac road). Death Road itself is essentially an uneven dirt track of about 3m in width with loose rocks. I only fell off three times and survived until the end, at which point you get a free t-shirt as a proud memento. 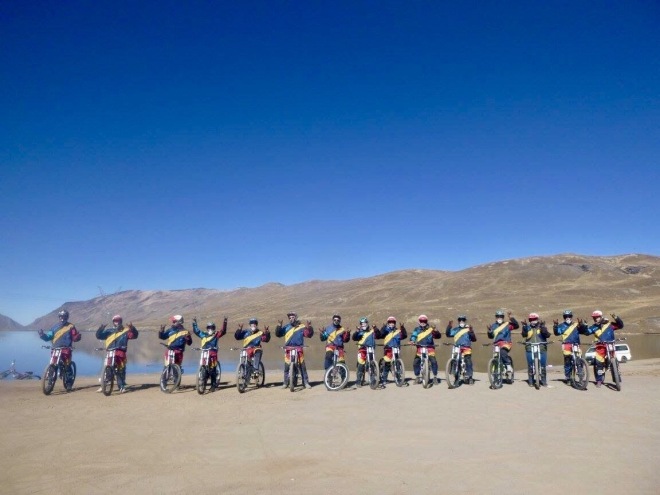 Unaware of what we were getting ourselves into

Since we hadn’t tempted fate enough that day

Despite La Paz far-exceeding our expectations, we were still keen to escape the hustle and bustle of the city and hop onto a four-hour bus to Copacabana, the nearest town to the Bolivian side of Lake Titicaca, the largest lake in South America, which is shared with Peru. The funniest part of the journey was having to get off the bus and onto a small motor boat to cross a section of the lake whilst our bus floated across on a raft. Doing this in the dark without any explanation from the bus company made the situation even more amusing. That’s South America for you! The next day we got the 8:30am boat to Isla del Sol, a fittingly very sunny and seemingly untouched island in the middle of the sapphire-blue lake. Hiking around the island, soaking up the sun rays and exploring the vestiges of the Incan culture at our own pace was a definite personal highlight.

Next, we hopped onto an 12- hour overnight bus to Sucre, Bolivia’s ‘most beautiful city’. And we were not disappointed. This quiet elegant city boasts neoclassical colonial architecture which has earned itself recognition as a UNESCO World Heritage site. The city’s charm is centred around Plaza 25 de Mayo, the main square which is surrounded by reasonably priced and good quality cafés and restaurants, including stands selling cracking Santa Clara empanadas. If you share Ross Geller’s passion for paoleontology, don’t miss Parque Cretacico and the Cal Orck’o cliff marked with thousands of dinosaur prints, just outside the city. Apparently there’s 5000 prints from about 15 different species of dinosaur, so that’s pretty cool. Café Gourmet Mirador is also a must-see for the best view of the city at sunset from deck chairs in a relaxed atmosphere. 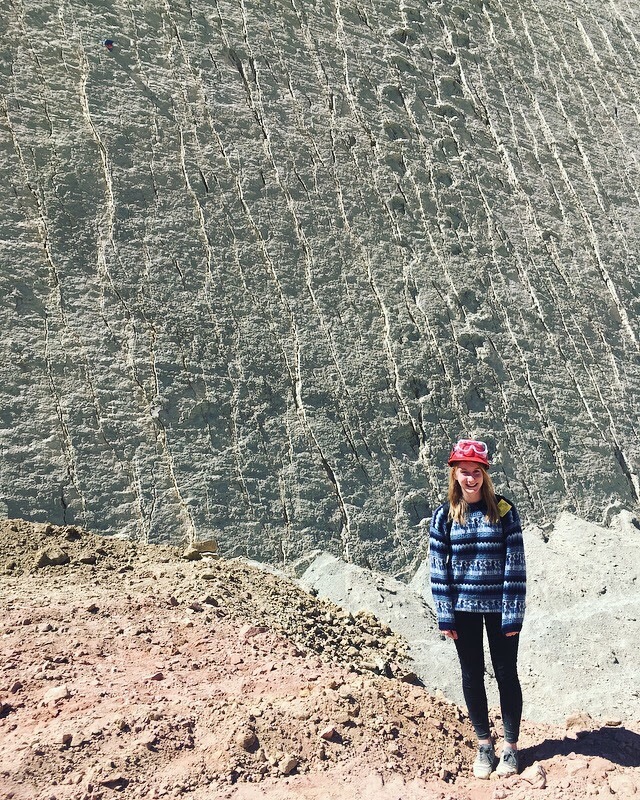 Potosí is only a few hours south of Sucre, and definitely worth a visit (even if just to say you’ve been to the highest city in the world at 4060m). We weren’t expecting too much from this mining town, as we’d read there wasn’t much else to do but tour the mines of Cerro Rico, the summit which hosts the world’s largest source of silver. Although we didn’t do one of the tours, we explored the town’s busy streets and enjoyed the friendlier, safer atmosphere compared to La Paz. In the evening, we even treated ourselves to a llama steak in a cosy restaurant called El Fogón.

Our last but definitely not least destination in Bolivia was the small town of Uyuni, where popular tours of the surrounding salt flats, the largest in the world, begin. It was also where we picked up our next travel companion, Jack, Alice’s boyfriend. The three of us joined a group of Brazilian tourists for our three-day tour in a 4WD with our Bolivian all-in-one guide, driver and chef, called Nilo.

On our first day, we visited the salt flats themselves, Salar de Uyuni, a vast expanse of salt leftover from a dried up lake millions of years ago.  Although the mirror-like effect is at its most intense a bit earlier in the year, we still managed to play around with perspective in some typical Uyuni picture poses:

That night we also stayed in a hostel made entirely of salt, including the beds!  Temperatures in the desert can drop to as low as -25 degrees Celsius and as you can imagine salt doesn’t make for the best insulation.

Our second day saw us visiting a series of lagoons, including my two favourites pictured below. 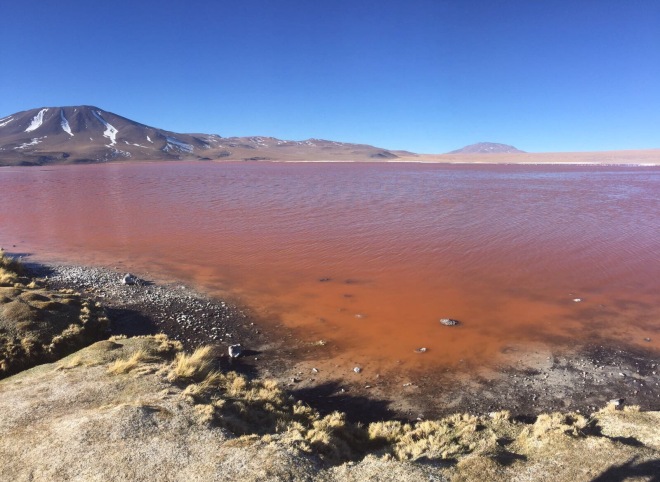 During the tour, we also saw geysers, volcanoes, lots of flamingoes, crazy rock formations in the shape of trees, camels and even the World Cup Trophy, and an island covered entirely in cacti. Bolivia is known for being really cheap, and the Uyuni salt flats are no exception- we paid around £80 for two nights’ accommodation, all our meals during the three days, and transport! It may not have been the warmest or most luxurious few days, but it was 100% worth it to see such natural beauties.

Bolivia, thanks for having us! In the words of our trusty guide Nilo, it was todo bien x