The run-up to Christmas has been somewhat different this year. Needless to say there are no mince pies in sight, no Costa Coffee Christmas drinks to fuss over and no Cadbury chocolate advent calendars on sale. Christmas in Spain is, in general, quite different to in the UK as the festivities start a lot later, and the sun is still shining relentlessly…

Not a cloud in sight 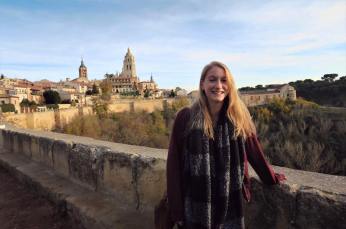 The first sign of Christmas came with the Christmas light switch-on on the 1st December (nearly a whole two weeks later than in Durham!) Small artisanal stands selling traditional Spanish foods like turrón slowly began to appear outside Plaza Mayor, a mulled-wine pop up shop opened in the centre of town and a Christmas market in my favourite neighbourhood, Barrio del oeste, offered me the first opportunity to do some Christmas shopping. I couldn’t, however, hide my disappointment over the lack of a Christmas tree in the main square as you would expect (think Trafalgar Square in London or Durham’s Marketplace). 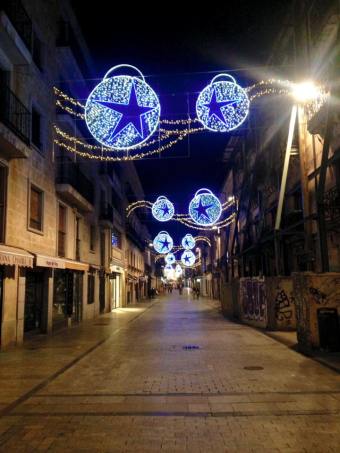 However, there was a good reason for the delay. On the 15th December, the city swelled as approximately 45,000 students from all over Spain and even Portugal gathered to celebrate la nochevieja universitaria, which roughly means ‘University New Year’s Eve’. For the party-hard Spaniards, it isn’t enough to celebrate New Year’s Eve just once, and arguably the student version is the more anticipated of the two. Understandably with so many people crammed into Plaza Mayor for the concert (there’s a strict limit of 21,700 people), it’s no surprise there wasn’t space to put a tree up! After a failed attempt of the Mannequin Challenge (watch this: https://youtu.be/6lRTLIE0JYw), the excitement culminated at midnight, when the bells sounded to ring in the ‘new year’, and after which everyone dispersed to the streets and flooded into the surrounding bars and clubs for Salamanca’s busiest night of the year.

Once nochevieja had passed, on the 17th December, it was finally time to complete Salamanca’s transition to full-blown Christmas spirit. Never one to stick to the convention, the council opted for a giant bauble rather than a Christmas tree, because why not?

Plaza Mayor at its most festive

Now I’m counting down the days until Christmas and with my flight back to London being as late as the 23rd December, I’ve come to terms with the fact that I will miss out on some family traditions. One of the strangest realisations was that I wouldn’t be home to put up the Christmas tree this year. Five consecutive weekends of visits from my family and friends have alleviated my Christmas ‘fomo’ (fear of missing out) and have given me the chance to proudly show off the sights of my new home town.  I am now a near-expert on the street art in Barrio del Oeste, a keen visitor to the Cathedral towers and a loyal customer to my favourite café serving the best huevos rotos in Salamanca.

With only a two week holiday before term starts again for exam season, it won’t be long until I’m back in Salamanca in 2017 for my last few weeks in Spain. Watch out for my next post where I’ll be saying goodbye to Salamanca before my next adventure starts in Chile…

Thanks for reading and wishing you all a ¡ feliz navidad y próspero año !

One thought on “Have yourself a Feliz Navidad”