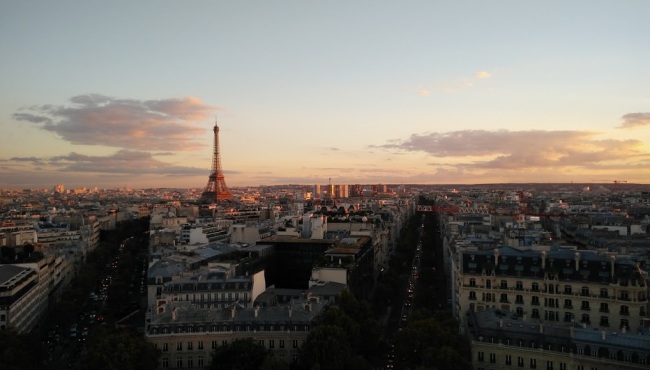 Wouldn’t you think that four months in a city is enough time to explore it and do all the things you want to do? Well, it is not.

16 weeks in Paris and there are still so many places I haven’t been to despite wanting to go, museums that I have not yet visited and bars I haven’t tried yet.Luckily there are another four months in Paris waiting for me when I return in January.

Basically, since my last blog post about my life here in Paris (not the one about studying at Sciences Po) so many things happened that I don’t really know where to begin. At the

My parents, my brother, Alex and me enjoying some overpriced coffee on the Champs Elysées. Always a treat to get taken out by your parents.

beginning of October my family came to visit for the weekend and my boyfriend Alex for a week which was incredibly nice. It feels good to show visitors around ‘your city’ though I must admit that at that time my Paris experience was pretty much knowing all the standard things to do in this pretty place. Later in October we also had a week of holidays. I think it was meant to catch up with work, like a reading week. But all the exchange students (surprise, surprise) went travelling or home, as did I. I spent that week in Heidelberg, visiting Alex who spends his year abroad there. Funnily everyone thought I’d go home when I told them I’m heading to Heidelberg for the break but I have never been there before so I think it still counts as exploring Europe to some extent. It was also very nice to see how Alex copes with living in a house full of Germans and finding his way through the 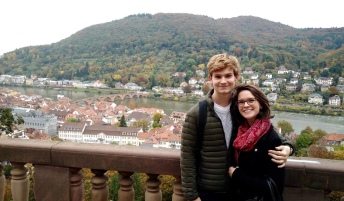 German university system. Guess I am pretty lucky to still see him about once a month, despite now studying in two different countries. I also got to meet his friends, including other Durham students who do their Erasmus here. It seems like we are quite spread over Europe and it is great to know that I will come back for my fourth year knowing others that shared those year abroad experiences with me.

My sister and her finance. It was November 1st and still so warm and sunny.

After the break my sister and her fiance visited me in Paris for the week so I actually got to do some more exploring around the more interesting parts of Paris. It is also cool to notice how you have your favourite spots after a few weeks, being able to show visitors ‘your Paris’ and not just the travel guide’s Paris-in-48-hours-standard-programme.

But taking nearly two weeks off also meant that afterwards I had to pick up my working pace slightly as essay deadlines approached and several exams started creeping up on me.

Still there was always time to spend time with my friends. At the beginning of the semester we would still go to touristy places and discover the city together but eventually we shifted our focus more on exploring bars, going out destinations and having food together. 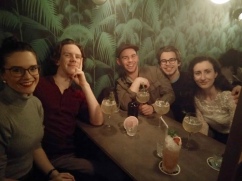 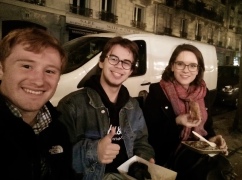 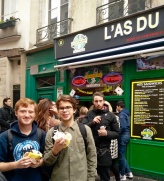 Best falafel place in Paris. I think I’ve been there about ten times…

Sadly we knew that the end of the first semester was coming closer and closer which meant that the majority of our friendship group would return to North America.

But as sad as this is it also further stressed the importance of really making the most of the time we still have together. If only uni stress wouldn’t have gotten in the way of that… My last week was crazy busy as I had two exams and two essay deadlines that I stupidly hadn’t started earlier.

Who thought Paris would be the place for me to try pumpkin pie? Baking credits to Tesni, it was delicious.

But that was the same for everyone really. And once that was all over and done with we got to celebrate that together as well as our farewell.

It is great to have friends from other parts of the world through it is really sad to know that I won’t see them anytime soon. Oh well, having to do a trip through Canada and along the US east coast doesn’t sound too bad to me. 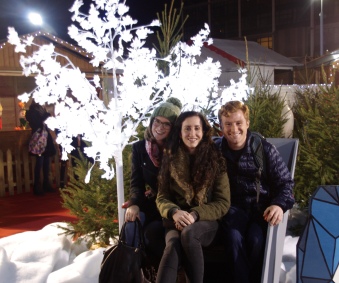 Cheesy Paris Christmas markets – got to pose in Santa’s sleigh.

Seeing Paris becoming all Christmassy was also very nice. Personally I’d still say that their Christmas markets cannot compete with those in Germany, but they are making a decent effort. And there are Christmas lights across the streets, all the fancy shop windows in the 7th arrondissement look even more extravagant and festive and all the big department stores like Printemps and the Galleries Lafayette try and outdo each other in regards to who does the festive theme best. Well, I must admit I love it. Now it’s time to enjoy the holidays, some mulled wine, loads of food and get ready for Paris, take II in January. Right now I’m actually in Heidelberg again as it is conveniently located between Paris and home so I have a stop-over for a few days, get to enjoy the Christmas markets here, and then head home.

As a interim conclusion I must admit that so far I absolutely love my year abroad experience. And if you’re thinking of doing one: do it! You won’t regret it. I certainly don’t.

As I left Paris it was time to say goodbye to most of my close friends here. Kaitlyn and Cam (left) will go back to Canada and Connor (ginger) and Calen (“everyone tells me I look like Benedict Cumberbatch”) return to the United States. Only Tesni and I will come back to Paris to embrace another Semester here at Sciences Po.

Beautiful Heidelberg in the December sun