Time here in Paris is different to time elsewhere. Or so it seems to me. It goes by so incredibly quickly. Only 20 days have passed since my first blog post; but in that time so much has happened. 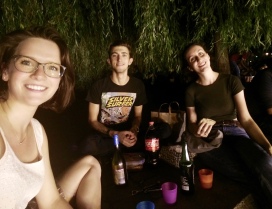 One of the last warm summer nights – well spent by the Seine.

I finished my first entry saying how well everything is going and how my start in Paris has been a bit too good to be true. Well, that was the day before I moved into my actual flat. I still very much enjoy my year abroad but I do want to tell you what my life here is really like, so be prepared now for a slightly more serious post. However, further down I also talk about some fun stuff I’ve been up to.

The lease of my room started on the 1st of September so I moved in on that day straight away. Unpacking was easy as my room is quite big but once I finished that and I was no longer busy I came to realise that I actually just moved to Paris and that I will live here for nine months. For the time since I got here I was sitting in a room all by myself, having no one around me to talk to and several hours to kill before my seminar that evening. I felt lonely and overwhelmed but I distracted myself by watching something. There was a sheer endless to-do list of things I needed to sort out or had to wait for before my life here could properly start and I had no food in the house. In retrospect I think if I had used my time that afternoon better to stock up on something to eat I would have felt a lot better but instead I just got myself a ready meal which just contributed a lot to me feeling bad about myself. That evening I had my doubts about my decision to do a year abroad. 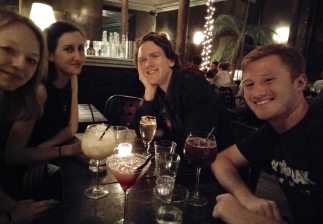 On Friday nights the area around the Canal Saint-Martin is very popular among young Parisians and indeed, we were not disappointed.

But luckily I had a patient boyfriend who would distract me via the phone and a lovely friend here offering consolation. Consequently the doubts were soon forgotten and when I headed to London the next day for Alex’s birthday I also felt a bit upset about leaving Paris for the weekend and missing out on all the social activities and the fun here in Paris. But the weekend back in England was also great. I guess that will be a constant theme (or maybe even struggle?) during my time here: enjoying Paris and fully embrace the exchange student life and at the same time dedicating time to my relationship, my friends and my family.

Now I have lived in my room for nearly three weeks and I have come to like it a lot. It is not super conveniently located and neither is it particularly cheap but I have a big room in a relatively quiet street with two very nice flatmates: Alice and Sulvain. Both of them are French which is great for practising the language and get more in touch with the French way of life. I haven’t exchanged my tea every morning for coffee yet but smelling Alice’s coffee when it is time for me to get up is making me more and more tempted. I will tell you more about them and my colocation in another post.

We’re now in the middle of my 4th week of classes and unlike in Durham they make you work here right from the start. There is much more pressure to read the texts for the seminars; oral participation in class is usually graded; and I’ve already had a French test and a marked group presentation last week. Kind of funny to think that if I were in Durham I wouldn’t even start doing serious work until November or so when essay deadlines are creeping up on you. Right now I think it is a good thing to have deadlines and assignments more evenly spread throughout the semester but let’s see how I feel about that once the work load increases.

Despite me getting more and more into a routine I still try to make an effort to explore Paris and to meet people. I still see the people I met during the welcome programme quite regularly though it becomes more difficult to organise gatherings now that everyone is on different schedules. With some of them I’ve been to the Normandy last weekend to visit the beaches on which the allied armies landed in 1944 which was very interesting; especially since I went there with two Canadians and an American who obviously have quite a different perspective on WWII than me as a German. 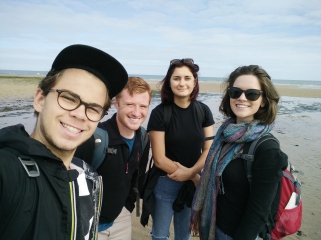 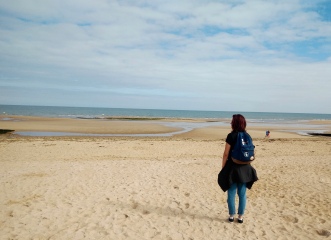 Weekend trip to the Normandy, visiting Juno beach and other WWII battle grounds.

We also spent another evening drinking by the Seine, enjoying one of the last warm days before it got kind of grey and rainy here a few days ago. And this weekend I had my first visitor from home here in Paris. Karlotta, a friend from school came and stayed with me so we spend hours walking around Paris together and meeting each other’s friends in bars.

That weekend there was also something going on in Paris called “les Journées européennes du patrimonies”  where many important buildings are open to the public so we got to visit the Hôtel de Ville (in the pictures below) and a few other ones, but sadly we didn’t make it into the Palais du Luxembourg as the queue was sheer endless. But it is so cool to have such an opportunity to explore the cultural heritage of a city that is otherwise closed as it is still being used. 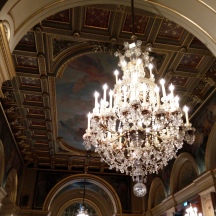 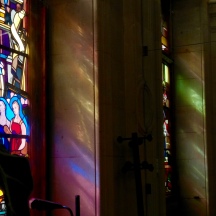