Only a few days have passed since I first set foot on the cobbled streets of Salamanca and I’ve already fallen in love with la ciudad dorada. The city has a lively student vibe and a friendly cosmopolitan atmosphere thanks to all the Erasmus students. With nine thousand international students from all over the world and a host of events happening all the time, there’s yet to be a dull moment!

My arrival coincided perfectly with Salamanca’s fiestas which run from the 7th to 15th of September. Dotted around the city are 83 casetas, which are pop up stands serving tapas and drinks. Each one serves a different pincho de feria – tapas ranging from albóndigas (meatballs) to chapatita de calamar (squid sandwich) to lágrima de cerdo ibérico (literally translated as a tear of Iberian pork) and more. For just €2 you can get a beer or a glass of wine with a free tapa!

There is also live music in the Plaza Mayor, the impressive baroque main square, which is always bustling with the local salamanquinos socialising and enjoying the impeccable weather. When illuminated at night, it becomes a radiant golden courtyard – the perfect concert hall for any act. So far, there’s been a traditional Scottish singer (not what I was expecting in Salamanca!), a local folk band, a flamenco act and a Spanish indie rock band. 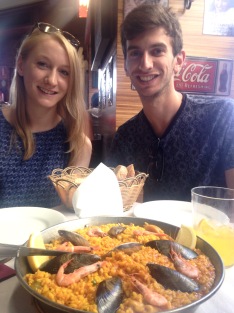 The main university buildings are situated in the heart of the old town. According to superstition, if you can spot the mysterious frog on the university building door, you will be blessed with good luck during your studies and will pass your exams. Never one to tempt fate, I set off in search of the lucky charm. Much to my disappointment, the entire façade was obscured due to renovation, preventing me from finding it. Let’s hope it’s just a myth after all…

However, the surreptitious amphibian is not the only thing to look out for. On the new cathedral there is a hidden astronaut and an ice cream-eating dragon which were added to the stonework in 1992 during restoration work. This crazy architectural trend of adding modern touches to old buildings apparently is not so atypical in Spain; the cathedral in La Rioja, another town in the north of Spain, features a mobile phone! After scrutinising the entire exterior of the cathedral several times, we eventually found the astronaut and the dragon. Admittedly, the congregation of people taking pictures and pointing may have been a giveaway… 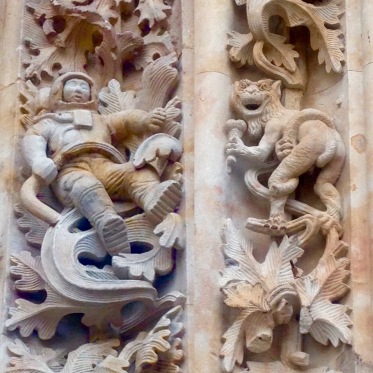 The astronaut and the ice-cream eating dragon

I would also recommend climbing the Scala Coeli towers of La Clerecía Church to get a 360-degree view of the city. There are two towers to climb which give you a stunning panorama over the new and old cathedrals, the university faculties and the modern part of the city on the other side.

If you continue to walk through the old town towards the river Tormes you will find a beautiful garden called el Huerto de Calixto y Melibea which is named after the protagonists of ‘La Celestina’, a famous Spanish book written by a student of the university in 1499. I studied it in one of my Spanish literature modules last year in Durham so it was surreal seeing literature come to life.