I’m not a subscriber to the notion of fate. Despite this, I have recently noticed some poetic coincidences linking me to Hong Kong. HKU’s Latin motto, ‘Sapientia et Virtus,’ translates rather grandly as ‘Wisdom and Virtue’. My subject, Philosophy, therefore has a serendipitous etymological link to HKU. The Latin roots, Philo (lover of) and Sophia (wisdom), are quite fitting for someone who is studying at an establishment dedicated to wisdom and virtue. Furthermore, the very exploration of virtue began with the philosopher Aristotle’s famous treatises.

Of course, I didn’t choose to study here based on those little bits of trivia, but it’s satisfying nonetheless.

The flight over was my first in an Airbus A380 – the biggest passenger plane in the world. I didn’t sleep much, but that actually worked in my favour and made getting over jet lag easier, as I just stayed up until ‘bedtime’ here in Hong Kong and fell right into the routine. 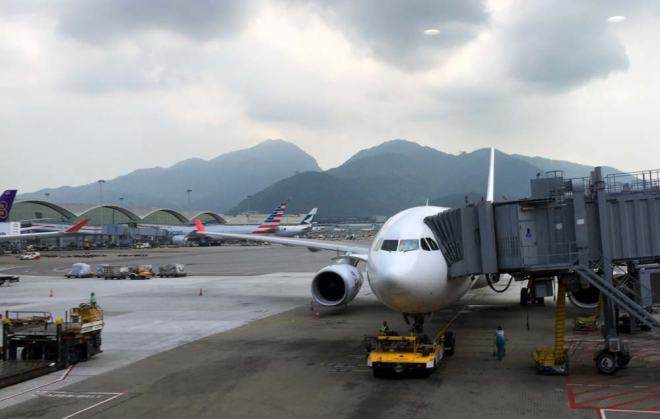 Taken just after disembarking, with the hills of Lantau in the background

On arrival, everything moved fast. Immigration was a breeze. A tense moment as my Visa was stamped, then, towing my two heavy bags behind me, officials swept me away to the most efficient taxi rank I’ve ever seen. Walking outside, the heat hits you hard. 34° and tropical humidity is surprising for someone used to Durham’s winters. Within moments though I was off and we were heading from Lantau Island (where the airport is) over huge bridges towards Kowloon and eventually Hong Kong Island and Pokfulam, where I am living for the next two semesters.

Now that I’ve had a couple of days to settle in, I’m starting to realise how well placed I am. Kennedy Town station for access to the MTR, Hong Kong’s version of the Tube, is at the bottom of the hill. Kennedy Town itself is a bustling little neighbourhood. Its combination of upmarket eating, an indoor market hall and lots of smaller restaurants and takeaways is punctuated by bars. We’ve explored a fair number of these already. Food is a topic I need to return to and do proper justice to another time, but suffice to say that it’s an understatement to call it a highlight.

Campus, which my roommate and I spent a couple of hours exploring over a few days, is one stop away on the MTR. First impressions? It’s big — many more students and buildings than Durham. Each building is also incredibly vertical, like the city in general, and the campus itself is spread across many levels with lifts, walkways, stairs and escalators connecting all of the different parts together. I’ve found the philosophy department, which is very modern, located in the Run Run Shaw Tower with the rest of the Faculty of Arts. Everything is well appointed and well connected, albeit hard to navigate as a new student as it’s all so spread out. I’ve been asking people for directions a lot and they’ve all so far been incredibly helpful. A retired teaching assistant even walked me to where I needed to go as he had a spare ten minutes and the building was difficult to find!

The welcoming attitude makes it easy for the large number of exchange students like me, although we have noticed that we don’t seem to be involved in the Hall Culture like the locals. There’s a noticeable divide between the Hong Kongers, all speaking Cantonese as they do their initiations in matching t-shirts, and the rest of us non-locals (a term which includes China Mainlanders as well us Exchange and International Students). This isn’t an issue per se, as the exchange community has been strong so far – I’ve met so many interesting people already and done some fabulous things – but it’s a small shame that we’re not included in the start of term traditions. Still, that could change in time, so I’ll just keep an open mind and continue trying to meet as many people as possible.

The view from our lounge in my college accommodation at dusk

In all honesty, my biggest complaint is that finding time to write is proving too difficult! Once term starts it might calm down, but at the moment, every minute is being filled with trips, exploration and socialising, which is all so much fun that I keep coming in at night exhausted and happy but without the energy to blog. I want to talk more about what we got up to in the first few days of being here soon though – there’s a lot to tell! Look for that soon then, but the long story short is that my first few days here have been fantastic and I can’t wait to share it shortly.

One thought on “Touchdown: First Impressions of HKU and Hong Kong”