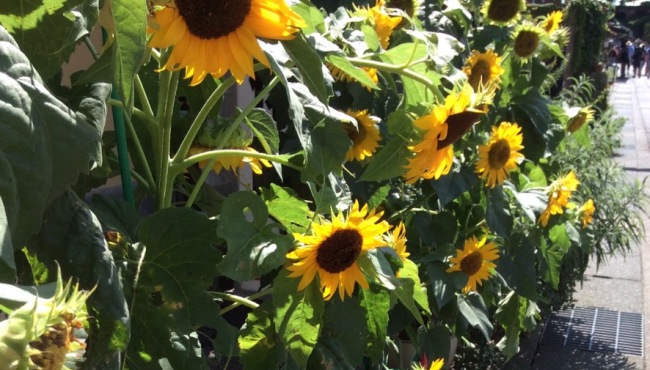 This year has been the most intensely amazing year of my life without contest. I came to Tokyo hoping and expecting to fulfil all of my childhood and academic dreams. I wanted to shop in Harajuku, become a regular on some of the most famous streets in the world for pop culture, take Japanese trains, eat rice every day, and see my favourite Japanese artists in the flesh. I wanted to visit centuries old temples and shrines, understand Japanese religion, learn about Buddhism and the philosophies of ancient Asia. That was where I was at. But where am I at now?

At the end of my year abroad, I’m astounded at how much has changed, and how I can look back on who I was when I got here and think of her as such a different person. The crux of this feeling I think lies in the fact that over the course of one year I went from being a giggly dreamer looking upon Tokyo with extreme excitement to being the very object of my dreams’ excitement. I am, now, the kind of person with the kind of life that past Sarah would and envied and fangirled over. I’m extremely proud to have become a person that thirteen year old me would have hailed as awesome. But this means that my perspective on Tokyo has been altered a lot. While it used to be something which made me cry with joy and jump up and down in excitement, now it’s just where I live. I take Harajuku for granted, nipping in to grab some more platform shoes when I need them. My wardrobe is that of a Tokyoite. I AM a Tokyoite. I walk across Shibuya Crossing like it’s nothing and fall asleep on the train like everyone else. I go casually to see adaptations of my favourite manga in the cinema. This isn’t a BAD thing – it’s more like my intense joy has seeped inward, and now instead of being crazy exited all the time I’m just very inwardly content with where I am. I’m no longer an onlooker – I’ve integrated into my own dream.

But of course, living in a real life dream and having become deeply happy as a Tokyoite ultimately means that I WILL BE DEVASTATED TO HAVE TO LEAVE. And I don’t mean this in an over-exaggerated way. In less than two weeks time now I will face a huge emotional challenge, and probably be in tears for many days. I’ve spent a year making Tokyo my home, the place where I feel I can belong (in Japanese my 居場所 ibasho), learning the language, and building friendships and relationships, all pretty much in denial that I would ever have to go back to the UK. It still doesn’t feel like I’ll really be leaving Japanese soil in less than a fortnight. Going back to the UK for me will mean leaving a really significant part of my life behind in Japan, including good friends and my partner, and it will be the hardest thing I’ve ever had to do. What will be harder still is that nobody in the UK will understand anything about this hugely significant chunk of my life that I’ve lived on the other side of the world. (In this sense, I will be very grateful to still have my fellow Durham/Tokyo exchange friends in the city next year so that we might comfort each other in the face of our great loss.)

Everyone is different, and the degree to which you become attached to the country in which you do your year abroad I’m sure varies from person to person. It’s normal to have some ups and downs during the year, in terms of missing your home country, family, and friends (we’re all told this before we depart!), but this year I have not once wished to be anywhere other than Japan, and have experienced nothing short of happiness. Even through some short-lived personal issues, my mentality was ‘well, at least I live in Tokyo’. I am perhaps an exception in that it was always my dream to come to Tokyo, and once here it proved to be even better than I had expected as a place which is simultaneously never boring, full of crazy wonders but also very homely and cosy, where you can feel peaceful. I always wanted to become a Tokyoite, but in fulfilling my dreams and beyond I have really ended up attaching myself to this city a lot, and I now want to live here on a more serious level (that isn’t just to do with being a shoujo manga character and being able to wear great clothes).

Which is why I’ve decided that after I graduate I will move back to Japan! At the start of this year I thought I might have one year of dream-fulfilment and then move on from this country to another. But it turns out that I can’t do that yet. I’m not ready to leave, I don’t feel I’ve experienced Japan fully yet, and I want to become fluent in Japanese. I may move on eventually, but right now Japan is the nation which occupies my heart! My decision to move back makes leaving slightly easier – I know that my goodbyes are only temporary, so they’re full of anticipation for the future rather than grief at something lost.

So what I am doing in my last two weeks? Well, eating, firstly. There is so much delicious food in Japan that it feels essential that we eat our body weight in it before returning to the UK. In Britain, Japanese food is overpriced and inferior in quality, and many things are hard to come by (such as okonomiyaki and takoyaki – MY FAVOURITES *sobs gently*).

I’m also going on plenty of last-minute day trips! Yesterday I went to Kamakura (a centuries old seaside city one hour from Tokyo) which was stunningly beautiful. I also plan to visit Yokohama and potentially Enoshima in the next thirteen days. It was great to see some of the traditional, historical Japan that Tokyo is somewhat short of in the weeks before leaving. In the oldest Buddhist temple in the whole of Japan, I was able to reflect on all that I’d learnt about Eastern philosophy and religion before being thrown back into an almost exclusively Western philosophy and theology course. Here are some pretty pictures: 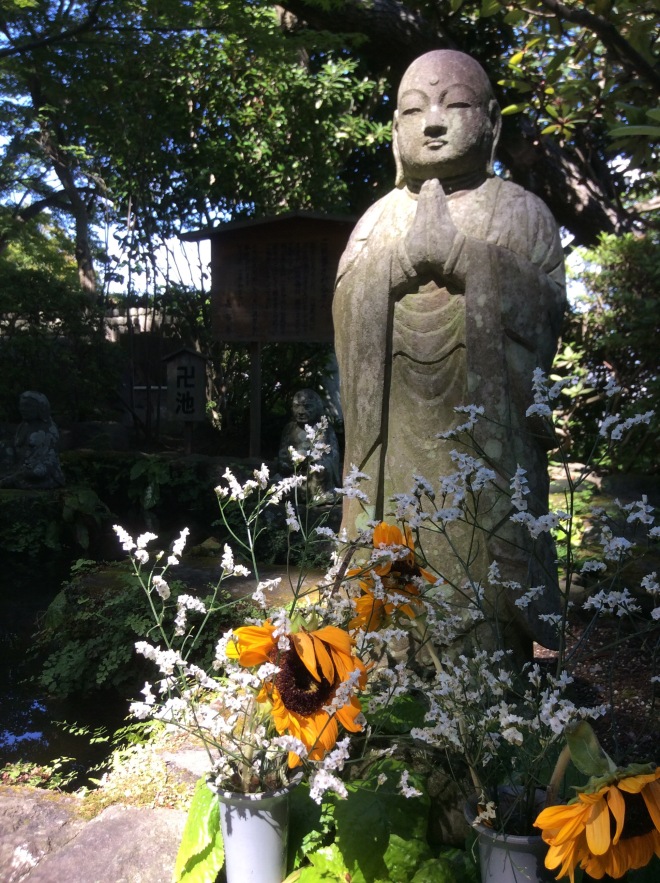 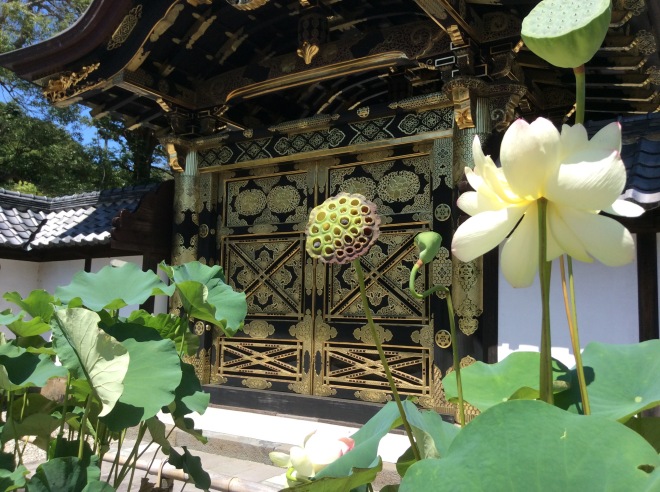 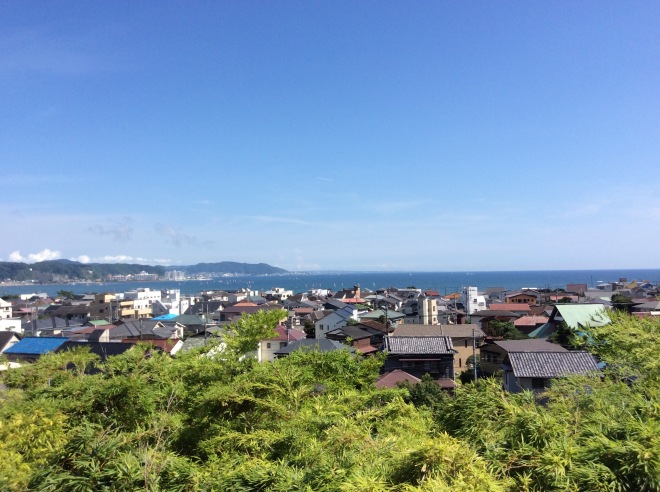 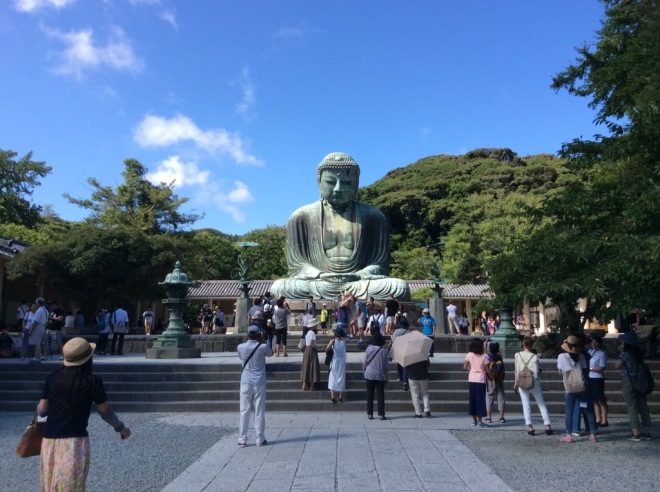 And of course, I’m putting off packing. Because packing makes it seems like I’m actually leaving, and I think I’d rather remain in denial until the day of my departure.

With a heavy but hopeful heart,

From the best place ever,