Being on an Erasmus year isn’t just about studying. I spent a large chunk of my first semester settling down in Rome, adjusting to life at university, and strengthening friendships with Italians and internationals alike. I did a lot of travelling inside the city of Rome, but I didn’t venture out (apart from to Milan for Christmas). I have more than made up for this in the second semester. I’ll give you a quick summary of a few places I have been and just let the photos speak for themselves!

Napoli, Pompei & Vesuvio
Naples is a key city in both ancient and modern Italy. In the old times it was a favourite haunt of the emperor Nero, and it was famed for its unusual Greek way of life. Nowadays it is home to some of the most beautiful architecture and museums, and the Neapolitan drivers are famed worldwide for their “but did you die?” attitude. I spent a few hours roaming around the National Archaeological Museum of Naples, having got a free ticket because I study Classics – to anyone who has ever asked me ‘What’s the point of studying Classics?’ there you go, free museum tickets. 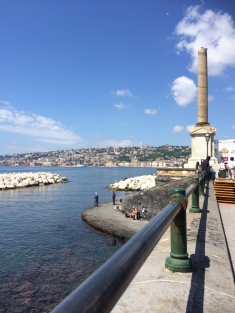 I mean look at that detail

Urania, one of the Muses

Whilst in the area we also went to Pompeii and hiked up to the top of Vesuvius. I don’t even know where to begin describing what it was like. When you first start learning Latin, the books they give you (shoutout to CLC) deal with a family who go about their daily lives, in the process teaching you some key latin phrases like ‘mother’, ‘dog’, and ‘disemboweled with a sword’. Then at the end of the textbook, they all die suddenly because Vesuvius erupts and buries them. Even the dog. The point is, many of the stories and people included those Latin textbooks were taken from inscriptions and remains found in and around the city of Pompeii when it was excavated. Seeing with my own eyes the frescoes which inspired a certain story I translated when I was 11, or the plaster cast of the dog who inspired the family’s pet Cerberus, was an incredible experience.

After leaving Pompeii we were driven part of the way up Vesuvius, with the last part to be hiked on foot. We were warned that the volcano was long overdue for an eruption and they weren’t joking: at the summit you could actually see the smoke escaping from a natural vent in the mountain. The hike was definitely a challenge (why Californians do things like this for fun is beyond me) but the view over the Bay of Naples was worth it! 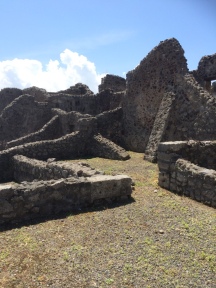 Remains of the gladiators’ barracks

The Bay of Naples

Sicily
Every year a theatrical company puts on various Greek tragedies at a Roman amphitheatre in Syracuse. Having taken a Greek tragedy module at Durham last year AND one in Rome this year, my friends and I decided to plan a mini holiday down to Sicily to see one of the plays. We saw Euripides’ Alcestes and it was amazing! It was a bit difficult to follow at times as the actors all spoke with Sicilian accents – a notoriously difficult accent, even for native Italian speakers.

Getting to Sicily itself was easy, with flight time from Rome to Catania totalling a massive 45 minutes. Our Air BnB was right next to the coast and we spent most of the 3 days wandering around the local towns and sitting by the sea. Sicily is an absolutely beautiful place and I’d definitely recommend a trip there. But definitely bring mosquito spray. 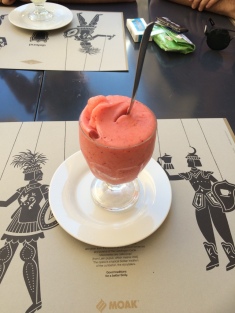 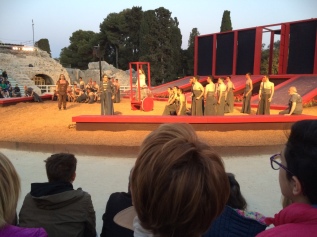 That’s all for my little update guys…See you next time!