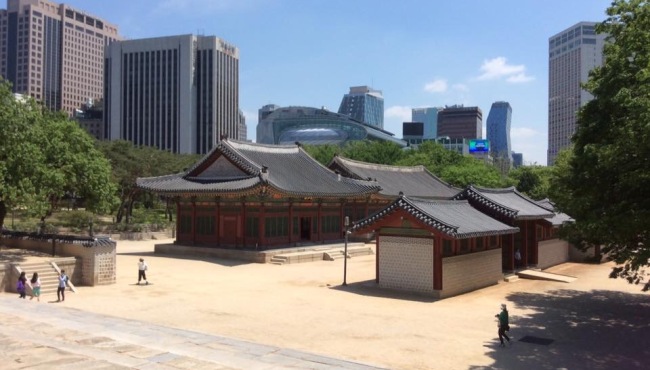 Being in Japan for a year, it seems silly not to take the opportunity to bob over to (South) Korea. And we did! For a long weekend of Korean fun.
The Republic of Korea is only two hours from Tokyo by plane as Japan’s closest neighbour. Although the two countries have shared many of the same cultures throughout history (Indian and Chinese philosophies and religions as well as the kanji writing system all passed through Korea from China to get to Japan in the past, and during the colonisation of Korea by Japan Japanese culture was forcibly imposed there to a large degree), today they have many stark cultural differences, and the Republic Korea maintains itself as a unique nation with a rich individual culture. Although me and Emily were only there for four days, this was really apparent!

A big part of what attracted me to Korea was the fact that, being trash, I’ve been a big fan of K-pop and K-drama for a long time. And in terms of K-pop I wasn’t disappointed – it’s played everywhere, which made me generally very excited, and at the weekend it seems pretty normal to see groups of young people practicing K-pop dance in the street.

But other than the obvious fact that K-pop is everywhere, there were some other things that stood out to us particularly and defined our trip. Here are a few of them!

Scattered through the centre of Seoul are a bunch of magnificent palaces, shrines and temples varying in age but all exhibiting the stunning features of traditional Korean architecture. Some of the palace complexes are really huge despite being right in the middle of the city centre, and the historical vibe is added to by the fact that lots of Korean people hire traditional dress and walk through the complexes taking pictures for fun. As a backdrop to each of these buildings, however, stand all of the gleaming modern glass structures of the modern Korean skyline. It’s really interesting to see old and new architecture occupying the same space, and provides some pretty striking photo ops!

In Japan there’s a whole lot of contrasting architecture too, but there are definitely big differences from Korea. One of the things I noticed was that while in Japan the newer architecture is often very 90’s, in Korea everything is a lot shinier and more modern-looking. South Korea recently overtook Japan as the technological capital of the world, too – maybe the two things are related. 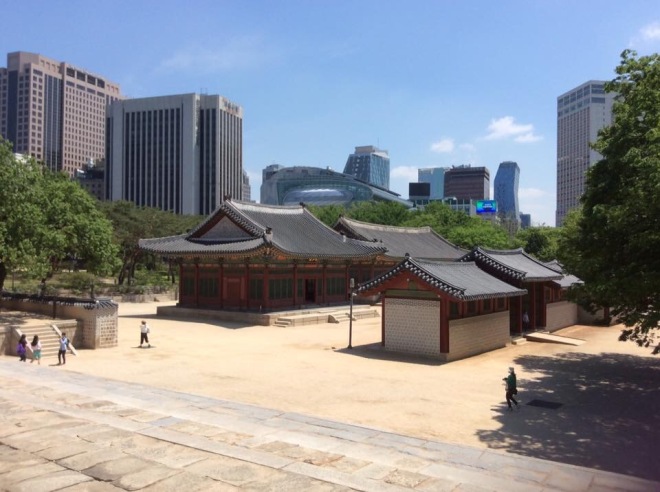 Korean food isn’t as internationally popular as foods from other countries in East Asia, like Thai and Chinese food. ‘WHY’ is the only question we can really ask in the face of this fact, because Korean food is super super super good. Traditional dishes include the bibimbap, tteokbokki, kimchi pancakes, tofu and meat stews, Korean BBQ meats, among many others (look them up!). Not only are all of these delicious, at Korean restaurants it’s customary to get lots of small side dishes free with your main meal, which means you get to try lots of fun extras. These include kimchi of course, which I am slowly becoming addicted to (funny, because I would never have believed that fermented spicy cabbage could be so damn good).

Seoul also had an abundance of street food, which was so good that we had it twice for dinner. 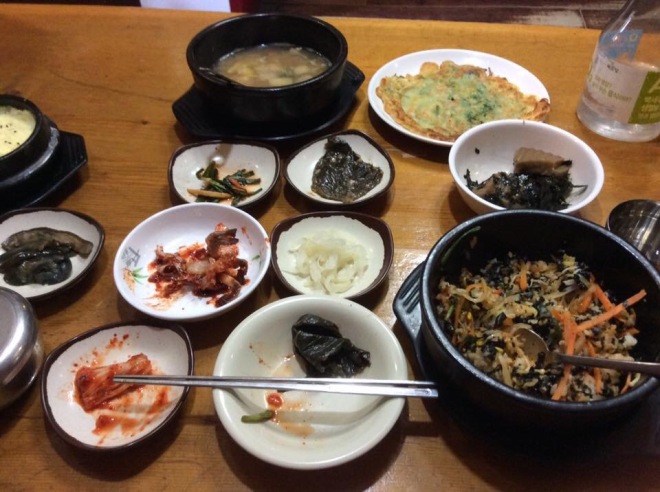 The hipster capital of the actual world

The hostel that Emily and I stayed at was in a town called Hongdae in Seoul. This town turned out to be the hipster capital of the world (according to my own judgement – but really). There were more edgy cafés here than I could ever count, and the town is full of art students from local universities meaning that it has a rich art scene and a great youth culture. There are weekly art markets and lots of galleries, and on top of that, lots of interesting street art. One of the best things is that while cafés and restaurants in the UK will often rip you off at extortionate prices, Korea in general is very cheap, and Hongdae cafés and bars are very reasonably priced.

Hongdae is so cool that I would happily live there, and I’m sure it’s lots of fun to be a student in Seoul (Hongdae also happens to be the clubbing centre of the capital, and Korean students’ drinking culture is definitely at least on par with that of the UK…). Maybe one day Durham will establish a link with a Korean university too! 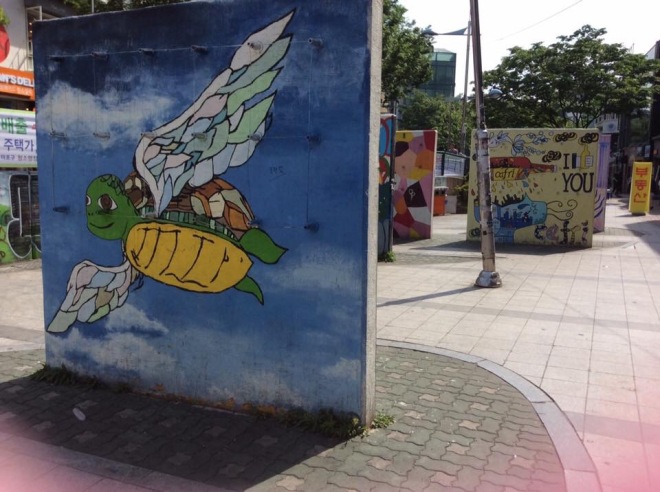 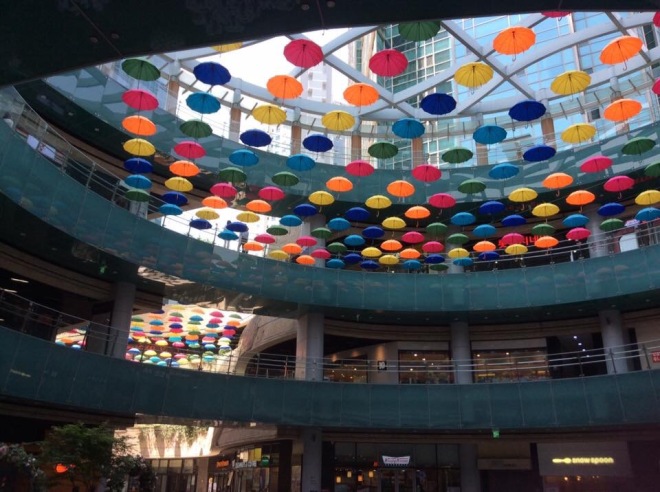 Since moving to Japan I’ve had some major cosmetics revelations – most notably that everybody needs Japanese skincare products in their lives, because they are magical and heaps and bound better than anything in the UK.

But Korea blows Japan completely out of the water. At least every three shops in Myeongdong, the main shopping district are cosmetics shops. Honestly, we spent many many hours just buying cosmetics. To give an example, everything in Korea is better than Mac, but a fraction of the price. By better I mean they’re literally magical – there are products that I’d never come across in my life, and ingredients that I’d never have dreamt I would be putting on my face (like weird proteins and snail?). So although I didn’t actually intend to buy any cosmetics in Korea, I came away with protein masks, face soaps shaped like black eggs, ‘pig nose’ treatment for blackheads, magic colourless skin-tone matching bb creams, face masks for my lips (you could also get face masks for ANY PART OF YOUR BODY), toner made from snail slime, creamy lipsticks and all sorts. And all for not even that much money.

As a bonus, when you buy things from Korean cosmetics stores they throw as many testers for other products at you as they possibly can, so you end up getting weeks worth of free stuff.

It’s safe to say I’m never going back to Western cosmetics because I’ve realised that they all suck. Korea is definitely the cosmetics capital of the world, and the people’s shiny faces don’t lie. 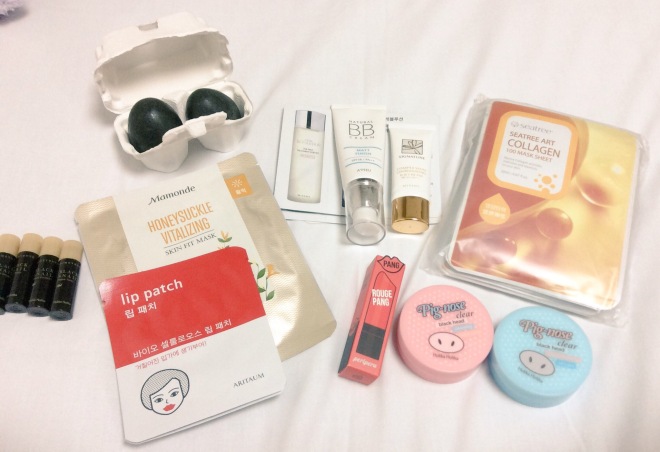 These were my most obvious impressions of Seoul, Korea, having been there for just four days. There were also many subtle things I noticed, like personality differences, and differences in fashion-senses between people in Korea and Japan (in general I think Korea has a lot more sass, while Japan has a lot more cute). On the whole both Emily and I rated Seoul highly and loved it very much! I’ll definitely go back soon. 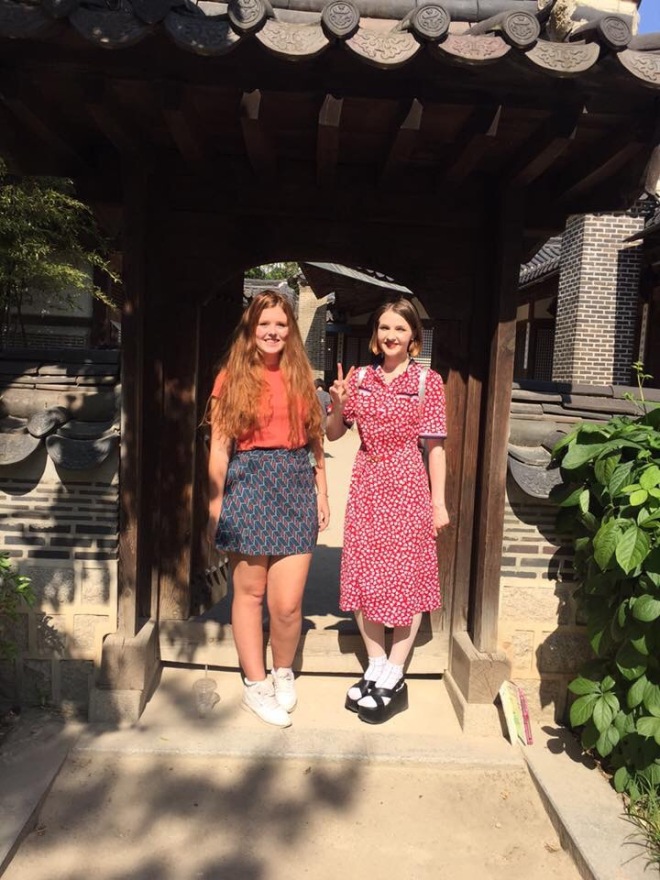