With just over a month left now, I’m very keen to tick as many destinations off my Spanish bucket list as possible. Being on the borders of the Basque Country, Bilbao was something which had to be done, especially after getting a taste of this unique and often overlooked province of Spain in San Sebastián. So it was music to my wanderlustful ears when my flatmate from Bilbao itself said I could tag along on her weekend trip home.

Even 2ish hours with the 3 of us crammed in the back of a Polo (I really recommend BlaBlaCar to budget-conscious travellers by the way) couldn’t dampen my excitement, although the further north we went, the damper things got outside the car…

Nonetheless, I enjoyed the route (especially having the window seat) as autovías sandwiched themselves between the lushest of green hillsides, many with their own tranquil cottages neatly placed on top like architectural glacier cherries, and not without a fair few flocks of sheep to match. Although I’m a Mancunian by passport, and a Londoner by blood, the 19 years of my life in the Norfolk/Suffolk countryside have left their stamp on my heart. As much as I might think of myself as a future metropolitan working woman, I am one heck of a country bumpkin.

This is definitely one of the reasons why Bilbao charmed me so much. Although you are conscious of being in a modernist city with plenty of transport and all the usual cosmopolitan hustle and bustle, although you might be next to the Guggenheim or a tramway, the almost vertical emerald hills can be seen straight ahead from most locations in the city. Along with the proximity to the beach, the inescapable nature encircling Bilbao results in a lack of that certain sensation of entrapment which often comes with being in a city.

Despite the stereotypical northern rain drenching the majority of our activities, most of the exploring went ahead nonetheless. Guggenheim – tick. Cable car up to the Artxanda mountains – tick. Homemade typical Spanish food – tick. ETA related protest witnessed – tick. 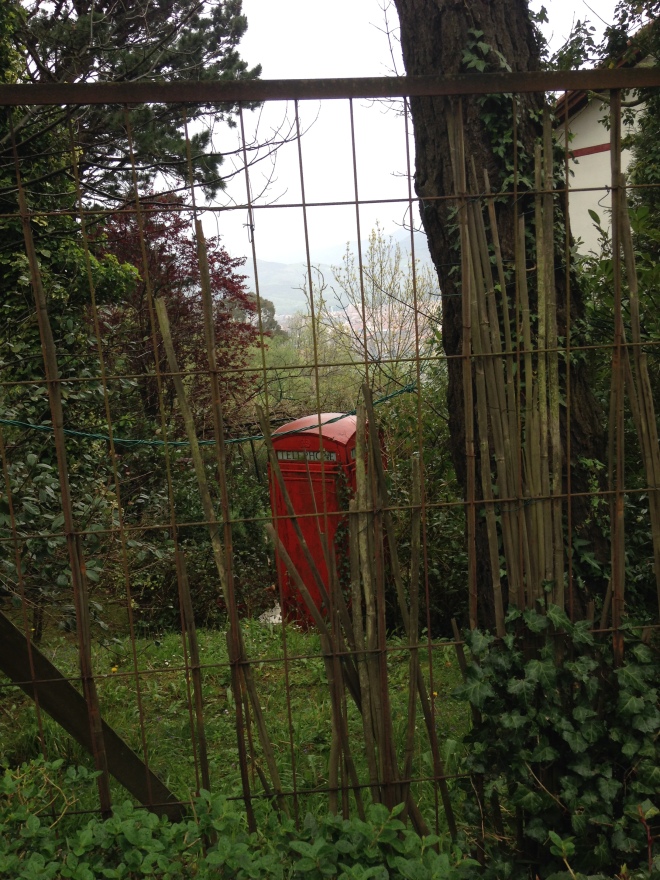 And wait – what is that red thing at the top of the Artxanda mountain…?

Staying with my flatmate and her laugh-a-minute mum was an amazingly integrated experience for a guiri like myself. I swear the woman used more idioms in 2 and a half days than I’ve heard in the last 6 ½ months here in Tudela. For reference, ‘to make good crumbs with someone’ (hacer buenas migas) means to make good pals with someone.

Although I do still find myself tripping over certain words (especially –er and ­–ir verbs in the imperfect subjunctive – damn you tricksters), debating the genders of adjectives while speaking, and not being able to control any consistency between rolling my Spanish Rs or not, I have impressed myself with up to what speed and volume I can still fully understand other Spaniards. And God knows they love to shout and speak quickly.

Saturday night’s antics involved tagging along to a birthday dinner with a group of my flatmate’s childhood friends. I was pleasantly surprised that the only things I didn’t understand was when they were referring to people or stories I was unfamiliar with. I was so delighted with how well I managed to keep up, and really flattered by the Spaniards’ compliments on how good my Spanish was for someone who’d been learning for 10 years. However, when the Trivial Pursuit and Time’s Up came out, I did feel embarrassingly lacking in something which is deemed general knowledge for people far below my age. Just goes to show how geographically and culturally specific intelligence is. Having said that, my other English flatmate did astonishingly well at Time’s Up, even in the first round (a game also known as Botecelli and most likely under other guises as well); involving cards with different celebrities who must be guessed by the team member through description in round 1, through 1 single word in round 2, and mime in round 3) where I flopped with Ozzy Osbourne for not being able to do an impression of him shouting the name of his red-head, X Factor judge spouse.

Although my Spanish has improved a heck of a load in speaking, where I’ve really made my mark is my absorption of others’ speech habits. Let’s just hope I don’t call my examiner uncle when it comes round to 4th year orals.*

*N.B. tío in Spanish literally means ‘uncle’, but it is also a popular slang term in European Spanish referring not to one’s father’s brother, but instead to a friend; something akin to mate/buddy/dude etc. and is often used mid-sentence as an exclamative.

One thought on “Bilbao and the beauty of the Basque…”