The Danish academic year is surprising long. I mean these Danes study almost all year, while in Durham at least we stop every ten days or so for a four week break (something like that anyway). Which is better? It’s quite hard to tell. On the one hand in Durham we get some time off from lectures to gather our thoughts and catch up over Christmas and Easter, while the Danes are in lectures whether they like it or not (they love it). On the other hand I don’t feel like I’m constantly moving between home and University because I’m not. Basically what I’m trying to say is I went to Belgium for ten days because I needed a break from all that studying I definitely do.

Well, actually I also went to Belgium to catch up with some great friends I met last semester, and do a whistle-stop tour of the country. But I did have to bring my work with me, so I’m calling it a study break. It did mean I got to study on several trains which always makes you feel more important even when you’re not actually doing any work because you’re on a train. I used to like trains but then I got my foot stuck in a train door and almost had it sliced off. Luckily my boots protected me so I only had to suffer the embarrassment of being in two different states of being (like an electron but instead of being cool like a wave and a particle I was on a train and off a train). And also a pretty severe panic that the train might leave and drag me with it. Can they do that? I never want to find out (who would to be fair).

First stop was student-ty Leuven. Home to beautiful architecture and a vibrant student population, it’s definitely worth a visit. A bar called Capital (I think) actually claims to have the largest selection of beer in the world, and the bartenders are incredibly good at seeming interested in telling you about them. It’s quite strong though. You’re unlikely to find much beer of interest below 6% (we’re a long way from Carling here) so er, be careful? (Of course I was).

Next was Brussels, where you can see the European parliament us British are deciding whether we want to stay part of or not. I’m probably biased on ERASMUS but it seems like a good idea to stay in to me. We had tea in a bizarre restaurant styled on some kind of 16th Gothic religious orphanage but the burgers were alright.

Bruges is the place everyone knows and it’s no where near as boring as its film made it out. Its obviously incredibly busy and touristy, but if you’re there during the week and around the less walked streets you can find a load of interesting places to see. And it looks nice.

Following the tragic events back in March, both airport and domestic military presence is much higher. This is unfortunate a feature of most of Europe now. However, don’t let this put you off. In every other respect, Belgium is a wonderful and probably under-rated country.

Apologies that this one has been a little brief and short on Denmark. Yet such a big part of the ERASMUS experience is being closer to places (well a little…) so you can see some places cheaper and with like minded people! Back to Denmark now with another update soon! If anyone has any questions about studying abroad with Durham please let me know here or on Twitter where I am Aaron_Bell1. 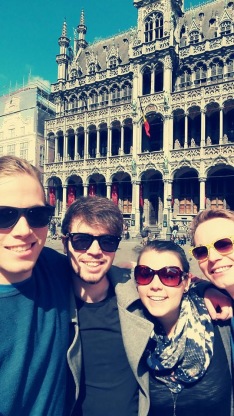