Ireland is known to have a culture that is centred around its vibrant atmosphere, clearly seen in Temple Bar, where the majority of the nightlife exists. The history of Ireland, nevertheless, is fascinating, with the commemoration of The Easter Rising just being celebrated a few days ago, throughout Dublin.

Trinity College hosted an ongoing exhibition, not only for the week but for the whole year, in remembrance of this infamous failed rebellion, exactly a century later. Being a very well-known establishment in the heart of Dublin means that the campus is a key attraction for many, particularly with it being home to the Book of Kells, accommodating ancient manuscripts, and this was where the exhibition was based. 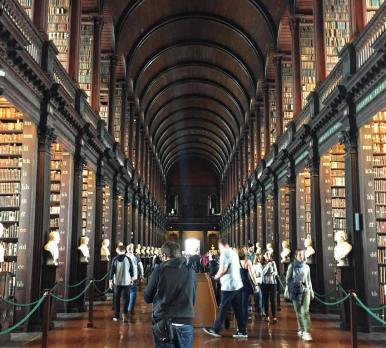 The Long Room in the Book of Kells

The historical significance of the institution forms a crucial part of Irish history, with some illustrious writers having studied there, including the likes of Oscar Wilde, Samuel Beckett and Edmund Burke, some of the greatest names in English literature, of whom the latter two have been honoured with lecture theatres named after them. Being surrounded by such influences has given me a new appreciation into the history of art and literature, and I have been able to appreciate different views that I would not have initially expected.

Once again, huge parades were held, possibly even bigger than those on Paddy’s day last month! This time there were even military planes flying above- the whole shabang. The Easter Rising itself was actually a rebellion that took place in hope to overthrow British rule in Ireland during 1916, and ultimately changed the political outlook in Ireland.