So, up to the 16th March I was still working terrifically hard and trying to enjoy myself.  On the 17th of March, however, I was free to go travelling, and my gosh, but was it the trip of a lifetime as I saw Norway and Sweden with some wonderful, wonderful friends and afterwards we visited an especially amazing girlfriend in Paris.

This post is an attempt to neatly surmise my travels, which were rather frantic at times as we were having a lot of fun.  We were also rather lucky in our travels.  It was during our trip that the terrible attacks on Brussels occurred.  We were due to fly to Brussels on our way to Paris just a day after the attacks and so accordingly booked other flights to Paris another way in the end.  My thoughts and prayers are with the victims and their loved ones.

Anyhow, I’ve decided to divide up this post into both Oslo and Paris (our trip in Sweden was cut short and rather limited by our having to spend the whole day trying to cancel and rebooking flights).

First stop on our travels together was Oslo!  We were there mainly to see two very good friends who we have met during Erasmus, Erland and Didrik and above all else it was great to catch up with two great friends again!

Not the best picture of Didrik and Erland, but too funny not to include… On top of the Oslo Opera house, the design of which is based on an iceberg!

And my goodness did they have a treat for us planned!

Our first day saw us go to Holmenkollen ski jump in the morning, which was used in the Winter Olympics, followed by a trip to the Opera house in the centre of Oslo in the evening.  Both were ‘must-see’ attractions in Oslo and I can totally understand why!  We were too cheap to pay to go up the ski tower, but it’s height alone was enough to impress upon us that it was no mean feat.  I know have a renewed respect for Eddie the Eagle… 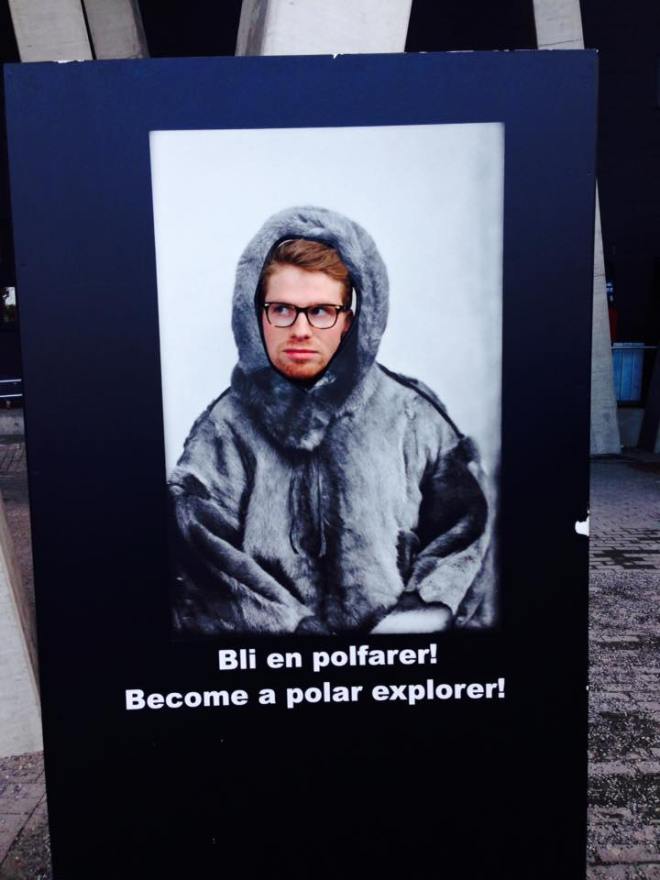 There are also other things to do at the tower…

We finished up the evening with a trip to Didrik’s girlfriend’s house, where we were cooked some delicious home-made chilli burgers and had a good catch-up 😀 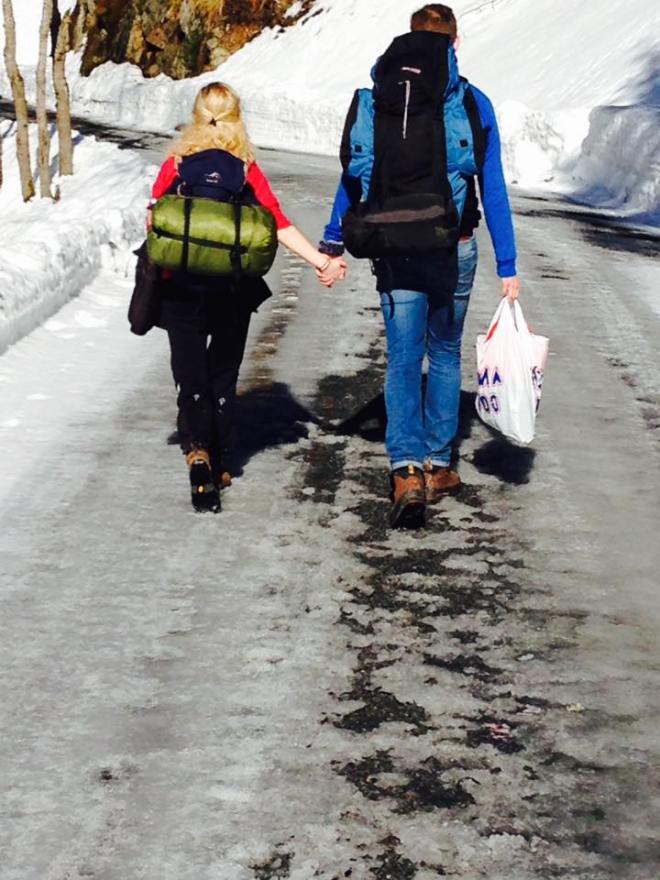 The next day Erland took a group of three of us travelling and two of our Norwegian friends up into the wilderness of Oslo, where we spent the night in a Winter cabin, which was without the amenities of running water and electricity, but included a sauna and an ice-cold river from which to collect water…

Oh and we also did some small ski jumping of our own using cross country skis, which was much, much harder to downhill skis to which I am accustomed!

So difficult to use…

Oh, and we also had an Easter egg hunt!  There is simply too much to say – put simply, we had made some wonderful friends on our Erasmus year and I cannot wait to invite these people to England so I can return the favour!

After an evening of cooking ourselves dinner and then engaging in the typical Norwegian cabin bathing experience (alternation between time in the sauna and a quick dip in an ice-cold river, which we all did at midnight!?), we then sat round a fire and sang songs for the rest of the evening. It was tremendous fun!

The following day (the last of our trip in Oslo) saw us have a well-earned lie-in after returning from the cabin.  Then we were up again to visit a park in Oslo decorated full of sculptures by the famous Norwegian artist Gustav Vigeland, which made us feel culturally enlightened.  It was an impressive park, even if some of the sculptures were a little creepy…

In the evening, Didrik’s family were unbelievable hosts, as whilst we were out travelling and visiting Oslo, his mother had been gracious and kind enough to cook us all a typical Norwegian meal, which was delicious!  After much laughter, good food and drink, we eventually got to bed late.

Then, at 5am we woke up and headed to Sweden!

Due to all the travel problems we had to sort out during our time in Sweden I’ve decided to skip talking about this too much.  All I will say is that Elsa was an unbelievably generous and kind host and that Goteburg and Lund are beautiful places to visit – I just wish we had had time to see a little more of them.

And the finale of our trip, Paris!

Paris was for myself the most significant part of the trip before we left off to go travelling.  First, because this meant seeing my girlfriend in her native city (we had met in Heidelberg and have obviously spent most of our time there), as she had been unable to join us travelling, due to exams.  Second, as this visit to Paris would mean that I would meet her parents for the first time – something which I approached with not a little trepidation as whilst my German is a bit ropey at times, my French is that of a total amateur.  Oh and third, as Paris is a wonderful city in its own right and trips to the Palace of Versailles and Notre Dame only made the experience more special.

Thankfully, everything went well – even the crazy medicine party, which was day before I was due to meet Amytis’ parents as I was able to carefully avoid getting drunk and had a great time!

From eating snails, foie gras, eating french cheese and some awesome red wine, alongside the most unbelievable food cooked for us by Amytis’s family, it was also a culinary experience to treasure as we had an eclectic mix of Persian and French food to savour.

I now attach a few more pictures here in no particular order.  Again, like Norway, there is simply too much to say, but I hope these pictures can also go some way to expressing what an unbelievable adventure Paris was, like the rest of our trip…

A silly selfie at the Louvre 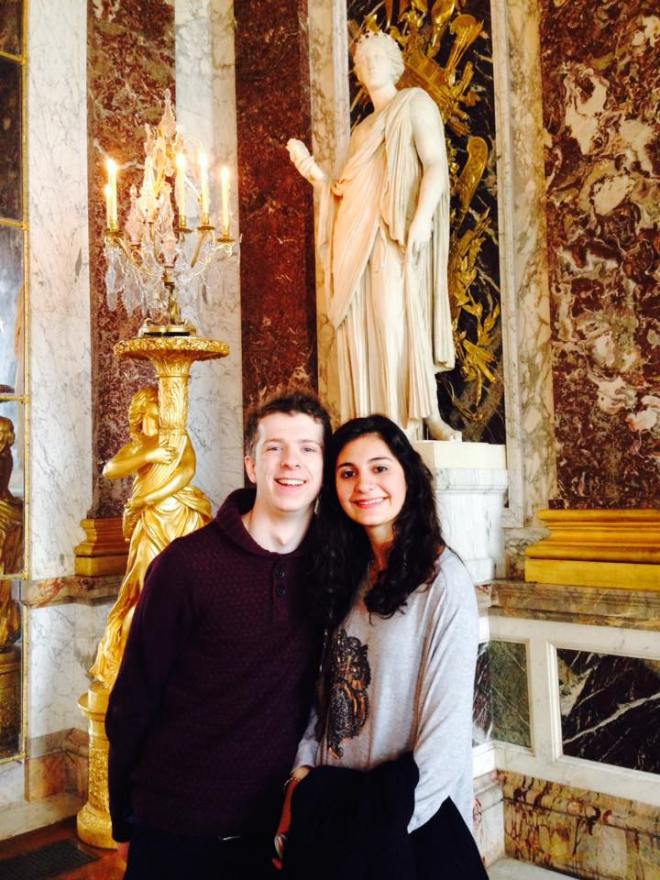 The Hall of Mirrors at Versailles

It was a wonderful, wonderful experience to do all this travelling with friends who I will treasure forever.