Living abroad is hard, and stagnation and mundane routine is not something I do well with. I was lucky that just when I was feeling the brunt of it that my friend Maya popped over for her second visit, with her keen-bean spirit and general lovely ludicrousness which was able to bring out my dormant silly side.

When a friend visits on your YA, you get out and do things you wouldn’t normally do, which of course breaks up the routine. But in a way that going home doesn’t always do, it makes you appreciate your amazing surroundings, and allows you to see things with a fresh pair of tourism-hungry eyes.

We booked ourselves a cheap and cheerful hotel a 15 minute walk from the Basilica of Zaragoza, which did a great job. I was going to say ‘the centre’ instead of ‘The Basilica’ there, but after this trip, I’ve rethought what I think is the centre of Zaragoza. Although I knew it was a big city, I hadn’t actually seen that for myself. After a weekend of supermarkets open past 9pm, beautiful night time walks by the Basilica, finding clubs I would actually go to, enjoying a more youthful and modern atmosphere, and discovering a plethora of great places to eat and drink circa Tudela prices, I seriously began to lament for what my YA could have been if I’d only been a 40 minute train ride away.

But then, I lost my phone.

There I was, just back from school Tuesday lunchtime. Delicious leftovers placed on the table, I decided to go and check my inevitable WhatsApp flurry and pop to my bedroom where I hung my coat. Not in my pocket. I’m sure I put it there… I must have put it in my bag. Not there either. I knew it wouldn’t be in there, because I put it in my coat pocket when I got hot walking back. So where is it now? Well I did take my coat off and – oh no. It must have fallen out my pocket when I creatively thought I’d thread my coat through my bag handles to carry it more easily. Suddenly, I knew exactly where it must be. Somewhere on the ground along the last 100m of the 1km stretch up to Valle de Ebro. Misplaced 5 minutes before the end of the school day for the primary school, Valle del Ebro, and the ETI students would have all come flooding down that street… Let’s just say between the ghetto-blasting, weed-stinking intimidating youths I’d seen loitering around ETI, and the many angsty, boisterous teens at Valle del Ebro, I didn’t fancy my chances of getting it back.

I spent the whole afternoon panicking, frustrated with myself, mentally writing a distressingly long list of what I’d need to do. Contact Durham and hope and pray that the YA insurance covers stolen phones, attempt to cancel my contract, report it to the police station, make pleas with the receptionists at the schools… while trying to remain coherent in a foreign language.

I managed to scrape my stressed self back together to go and teach my second my private lesson of the afternoon – having already cancelled the first to try and find my lost technological companion. On the way back I even left my email address with the phone unlocking shop in case they could catch someone in the act.

Once home, I saw I had a Facebook message from my friend Maya. Presumably continuing the conversation we’d been having on WhatsApp earlier, before the whole debacle had begun. Alas, she had sent me this screen shot… 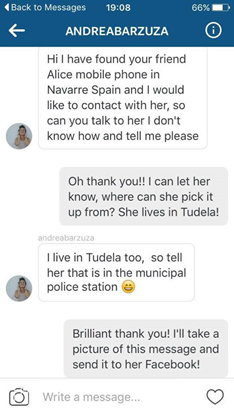 I belted it the comisaría round the corner, which was thankfully still attended by a solitary police man. After describing the phone to him, the feelings of relief I felt when he produced what was undoubtedly MY phone (there aren’t many people in Tudela with a label saying ‘Alice’ on the back of their phones) can hardly be described. Despite a little complication when I couldn’t remember my phone number to prove to him it was mine, my precious jewel of communication was handed back to me once I’d showed him that I knew the code to unlock it. In my calmer state I began to think – how could something which 20ish years ago someone my age would almost certainly not have had, cause such heightened emotions? Was I really such a slave to technology?

It got me thinking. If I HAD been in Zaragoza, would my phone have found its way back to me? Probably not. Would I even be able to pinpoint where precisely I had lost it? Very unlikely. Sometimes, the dull is good. There is safety in the boredom. The small town friendliness often means more compassion, and coming across someone’s lost property is more likely to trigger a reaction of sympathy. Even if it is just a sophisticated Facebook machine I shouldn’t be crying over.

One thought on “Just a small town girl…”