It’s almost the end of winter but the alleged South French warmth does not seem to be approaching. It turned out that the nice January weather was merely a scam and although the temperature is nothing like a hard winter in Eastern Europe, these spring mistral winds can chill to the bone.

Having said that, it is not cold enough for a decent snow in the Alps which was a huge let down, considering how much I love skiing. This is especially unfortunate since it is the first time I’m actually living in a country with decent skiing opportunities. The skiing resort I visited is called Puy-Saint-Vincent, where some of my friends from home were attending a ski camp. Keeping the whole trip low-budget, I had them bring all my equipment from Budapest while I got there by using ridesharing app Blablacar and hitchhiking.

Blablacar was one of the first things I learnedin my French language classes here, it’s incredibly popular and therefore there are plenty of rides from multiple places across and also outside the country. After some complications with finding the exact place, I met my friends and took up most of their apartment with my double inflatable mattress. Unfortunately the skiing part wasn’t the best due to the poor snow conditions but the whole experience was amazing and probably also my cheapest ski trip ever. 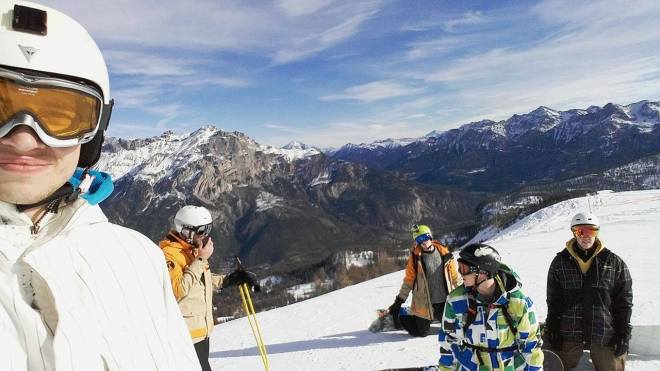 On my way back from skiing, I stopped at one of the best French cities so far. It’s called Briançon, and it has everything one needs: mountains for skiing, an impressive view, and it’s actually a working city with people not just living off tourism.

I also started taking up sports after my miserable attempt to get into rugby which ended with a long-lasting injury. First, I started rowing here in the brand new Sciences Po Aix rowing club (it is so new that I’m one of the two members). There is a beautiful little lake about 45 minutes from Aix, where you don’t have to mind neither the arches of Elvet Bridge, nor that scary waterfall at the end of the rowable part of the Wear. I also find rowing under these weather conditions much more pleasant.

Another thing that I have been getting into lately is Gaelic football: it is probably nothing new for all the British, but it is something I’ve never heard of. My involvement is mainly due to my Irish Erasmus friends, and despite all its weirdness, I’m always looking forward to those Thursday nights when I can try to pick the ball up from the ground using my foot. The French are also really enthusiastic and there are plenty of teams in the country. My first tournament is at the end of March which I will definitely write about in my next entry!