I’m completely out of it. I just cleared half of Seville at a sprint. The Sunday evening bus from Olvera pulled in five minutes earlier than usual and I figured I could just about make the eight o’clock bus to Villafranca at a run. As you might expect in such situations, all the traffic lights went red as I reached them, but despite everything (and aided by a significantly less-crowded city centre than usual) I made it to Plaza de Armas with five minutes to spare… only to be mortified to find it operating on a pre-paid tickets service. I’d already resigned myself to a two hour wait and a miserably sloppy 2.30€ egg salad sandwich that almost fell apart in the vending machine (one of the world’s most villainous rip-offs) when the bus driver hailed me over. There was room for one more after all. Just once, just this once, I got lucky.

And now it’s your turn to be out of it, because this one’s a real titan. Get comfortable.

I’ll be perfectly honest with you, I was umming and ahhing about going ahead with this weekend’s plan right up until I went to sleep the night before. I had my reasons. The torrential rain forecast across the south was one of them.

To cut a long story short, am I glad I didn’t! It’s been quite a weekend.

I didn’t really do it summative justice in my last post, but last weekend was Carnaval weekend across most of Spain, and Villafranca de los Barros (in some ways for once, and in others as always) was no exception. The reason for that is because I wasn’t really happy with the quality of the two write-ups I drafted, both of them being a little too dry and/or morose for my liking. I’ll put that down to spending all of my creative energy on the novel.

More problematic by far, there’s simply no escaping the Lilliputian environment of Villafranca. It’s very hard to go anywhere or do anything without the whole school getting wise of it in twenty-four hours. It’s like my every step is watched. As I’m often guilty of doing, it’s possible that there’s more conjecture in that statement on my part than fact, but in any case, Carnaval weekend was a poor time to test that theory. All of my students were out on the town – every last one of them, in various states of dress – and that old pariah state of feeling like an intermediary between teacher and fellow human being was buzzing about my head all night like so many brown flies. Even underneath a salwar kameez, a red felt cap and thick sunglasses, they still smelt me out. In the end I got tired of being asked the same question – ‘Who did you come with? What? You came alone…?’ – and went home. It’s the fourth most common question I get out here, after ‘What’s your football team?’, ‘How do you know so much about stuff?’ and ‘Are you gay?’.

Well, the forecasted rain came, and it came down hard. I was fortunate enough that most of it fell during my commute to Seville, giving me an hour’s reprieve to test out my new auto-focusing wide-angle lens on Triana and the Giralda (as if I didn’t have enough photos of them both already). It’s a doozy and we’re going to work some serious magic together.

I have to say, I do feel bloody lucky to have to go through Seville every time I feel like heading south. Like Canterbury Cathedral before it, I’ve become very blasé about the gorgeous streets of Seville, knowing the place like the back of my hand as I do now. But as cities go, it’s every bit as enchanting as its reputation. It’s a thought that struck me as I sat in the parakeet-infested park by the Alcazar sketching a girl who was sketching some Japanese tourists. I thought it was worth sharing, because sometimes the best things in the world are already at your feet.

I mentioned that last weekend was Carnaval weekend across most of Spain. Not all of it. Thanks to the immensely popular celebrations in Cadiz, some of the province’s neighboring towns follow the practice of delaying their own festivities until the following weekend, giving their denizens the chance to support Spain’s Carnaval capital both home and away, as it were. Olvera is no exception.

As Hindu-ified as a blonde-haired, blue-eyed, snub-nosed Englishman can manage, I found myself outclassed a thousand times over by my hosts, some of whom might well have passed for bona fide Pathans, if not Indians. 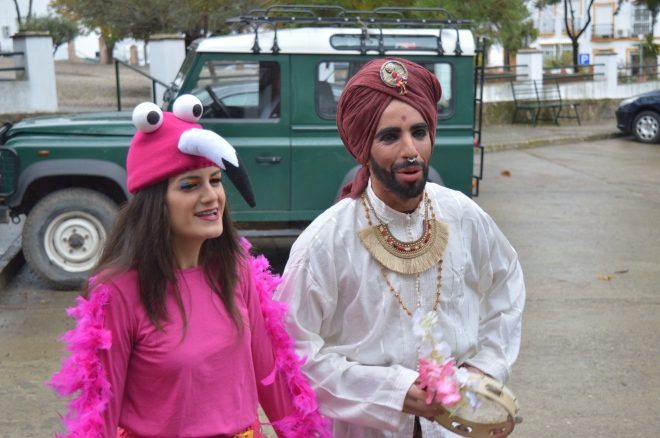 Durham, please look upon this little corner of the world and learn. This is how fancy dress is done.

Whatever Moorish blood remains in the heritage of the Andalusian is brought straight to the fore when he dresses in Eastern garb. The curling black hair, dark complexion, regal profile and sparkling brown eyes of these people evoke both an ancestry hailing from across the Strait, not more than a few hundred miles away, and the mystical infusion of a more ancient, more haunting legacy chased from the Punjab so many centuries ago.

I could sing the praises of the beauty of the Andalusian all day. Fortunately, I won’t.

After arming themselves with all the rings, chains, hoops and bangles in their parents’ possession (most of this lot wear nose-rings habitually anyway), we set off to dine together. Adrián, very much the leader of the group – if not for his age or spectacularly authentic costume, then because of his experiences in India – led the way, beating a tambourine and striking up a ready chorus of sevillanas (in both senses of the word). I found more than one willing future traveling companion amongst Alicia’s friends over lunch, which is quite an achievement in this poverty-stricken part of the world; although, as Ali put it, ‘esá chicá tiené dinero, eh’. I also snagged an invite to Granada, which I intend to make good on now that the first snows have finally arrived.

The rain returned with a howling vengeance during lunch and there was much talk of the street parade being called off. In the end the locals seized on a five-minute reprieve as the excuse they had been waiting for and it went ahead despite the return of the driving rain. For the sake of our outfits – and my camera – we left after only twenty minutes to seek shelter in the familiar settings of Bar Manhattan, but not before I’d ticked off all of the usual Spanish politically incorrect faux-pas: blackface, falangistas and an Arab with an ISIS flag getting mock-assaulted by a troupe of minions. This is my country – half of it – and everyone and everything is fair game for a laugh. Is it any wonder I’m so anti-PC?

After a cubata or two we raised the roof at Manhattan in a manner that you could only hope to find in Andalucia. Once again led by the tireless Adrián, the lot of us laid down sevillana after sevillana, with much clapping, dancing, wailing voices and the full support of the neighboring tables. This is the South. This is Andalucia. And I adore her. And to think I was tempted to even compare you to Extremadura…! 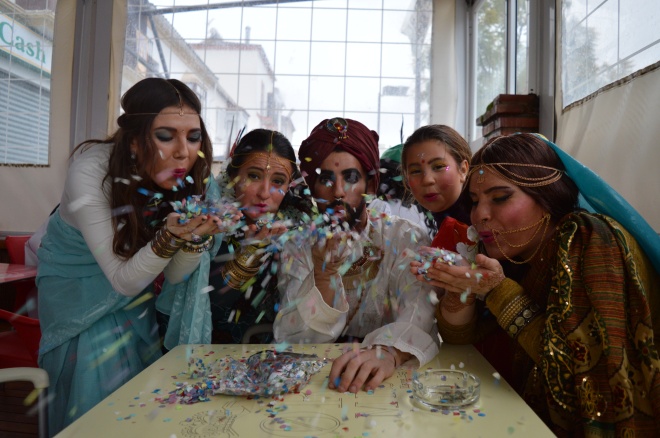 At length we set out for the carpa (the local barn-cum-sports hall) where the real party was just getting started. The three black men I’d noticed at our restaurant earlier – always an oddity in the Spanish countryside – turned out to be the drummers of the Brazilian dance troupe leading the festivities, backed by a true slice of Rio in the form of four feathered dancers decked out in the most sparkly lingerie. 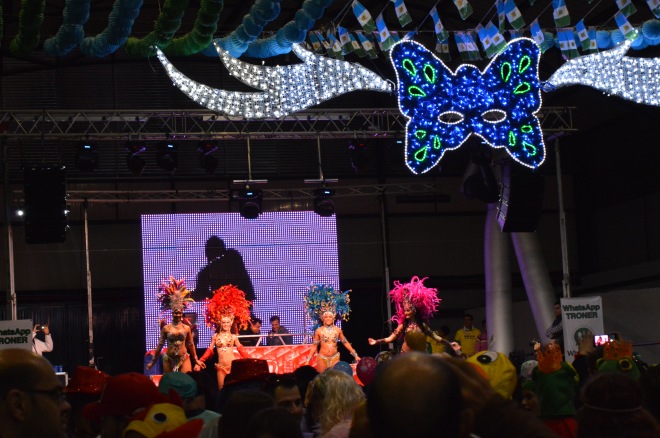 There were prizes going for best costume, which was necessarily split into nine categories: essential, when you have the likes of a centaur herd, the seated judges of La Voz and Pedro Sanchez (complete with PSOE podium) to choose from. The top prize went to the most obvious gathering of the night: the Amish. Who’d have thought they were such party animals?

For once – FOR ONCE – Reggaeton did not dominate proceedings, and my shameless footwork landed me in the centre of several dance circles. Fortunately, I was the only one with a camera by this point, and therefore there’s no evidence of this. Of my cohorts, however, there’s plenty of material.

Simply put, Spaniards have far less qualms about having their photo taken than other nations.

Things wound down after a while and we retreated in search of dinner at the ungodly hour of ten o’clock; too early for dinner, and far too early to call it a night. That meant another sit-down meal, which in turn meant more sevillanas. Then it turned into a bilingual Disney face-off between Adrián and I as we sang Disney classics at each other across the table in our respective languages until either one guessed which it was and joined in. Wizard. Ali was getting pretty tired of it all by now and told us to shut up more than once. The victorious Amish on the other table didn’t seem to mind in the slightest. They were too busy getting mortal.

We ended up in Frena, the usual disco spot, for a dance and a couple of drinks, and I talked travel with the endlessly charismatic Adrian. By half one, though, everyone was worn out. Dreadfully early, even by English standards; but then, we had been partying since five in the afternoon.

I spent the following morning with Ali and Angela watching Bride Wars whilst they downloaded all of the photos I’d taken. In all fairness, I’ve had worse Valentine’s Days than munching popcorn over a chick flick with the one-that-could-have-been and her best friend. At least, I think I have.

As a final note, I’ve been considering climbing down off the fence and choosing a football team to support. It must be said, family bias aside, I’m drawn to Barça, but the insufferably indefatigable commentator on the radio and his full-throated adoration of Messi may make a Real Madrid fan of me yet. BB x