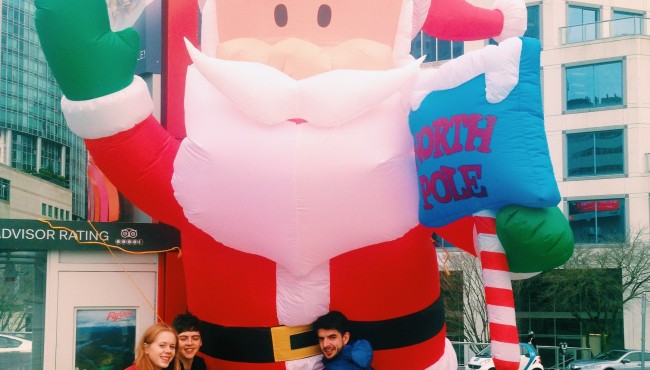 “I walk across campus, my freshly washed hair turning to literal icicles, fingertips close to frostbite, hands lizard-like from the dry air.”

These days in Canada have a habit of running away from me, and it is only as I sit down and recollect happenings from since I last wrote that I discover that an entire month has crept past. I boldly claimed in my previous post that the semester had been an emotional roller coaster yet this month may have topped it.

It has been abundant with trips to the mountains for snowboarding and sightseeing, final exams, departures of dear friends, a Christmas excursion to Vancouver, and a week of reflection and board games in rainy old Albion.

Sunny yet frosty by the Bow River in Calgary

My thermals have seen a great deal of use since late November, having originally been bought to face Durham’s brutal winter which seems laughable as I step out of residence at 8am in white-out snow conditions and a cozy minus 15 (although I hear it snowed in Durham – nothing here quite lives up to the sight of the cathedral’s towers sprinkled in white).

Canadians who have visited the UK complain of the humid cold which ruthlessly seeps through countless layers of clothing and chills to the bone but as I walk across campus, my freshly washed hair turning to literal icicles, fingertips close to frostbite, hands lizard-like from the dry air, I can’t help but long for damp winter days past gone.

It snowed in Durham you say?

Thankfully Calgary is renowned as the sunniest city in Canada and as well as keeping the vitamin D levels in check, it keeps the mountains visible on the horizon, the cold just about bearable, and gives me an excuse to break out the sunnies in the middle of winter. Not sorry. 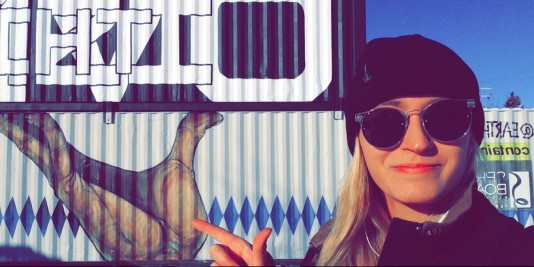 I managed to squeeze in two snowboarding days at Lake Louise before the semester ended. One beautifully sunny, and the other a dreamy powder day where the snow was like drifting through the fluffiest cloud in the sky. I’ve never felt more confident on my snowboard and there’s nothing more awesome than shredding all day with good friends. Of course I wouldn’t dream of missing lectures to go boarding but the temptation is always there…

I love my classroom.

Snowbathing – an up and coming winter sport.

I’ll admit that I’ve been neglecting ice skating a little, though my friend Ben and I did find a cute little rink in the centre of town surrounded by Christmas lights and watched over by the Calgary tower. We were overcome with childlike wonder and happily sung ‘wonderful christmastime’ at the top of our voices as we fell around on the rather cut up ice, well trodden by others who had clearly discovered similar joy at the rink. It was a perfect epitomisation of how the festive period should be celebrated. Ungracefully yet joyously.

We’ve recently literally stumbled upon a large section of the river which has frozen over and been prepped for ice skating, perfectly situated in the picturesque Princes Island Park and seemingly undiscovered by the masses. You wouldn’t get this on the Thames, that’s for sure (at least since the 1800s).

A festive gem in the city.

“One weekend we hopped in our hire van to spend two days at a picturesque lodge nestled at the foot of a mountain park.”

Canmore – a wondrous place that I once compared to Narnia in an earlier blog post – maintains the enviable position of being my favourite mountain town. Though a convenient pit stop along the way to Banff and Jasper, it holds its own as being just as beautiful but significantly less touristy than both. An ideal home for those who appreciate the proximity of a big city as well as the serenity of the mountains.

Luckily for us, the uncle and aunt of our good friend live in Canmore, and one weekend we hopped in our hire van to spend two days at their picturesque lodge nestled at the foot of a mountain park. We were treated as adopted children – fed, watered, and let loose on their home gym and balcony hot tub – and all thoughts of impending exams disappeared for a happy 48 hours. A leisurely drive to the shores of Lake Minnewanka and a morning stroll down the river bank made the trip complete.

Go to the mountains? We sure Can-more.

Someone should pay us for this kind of advertising.

Lake Minnewanka. There’s a town beneath this lake. Hogwarts style.

Planning had been in the works since October for a Christmas trip to Vancouver with five friends. My last exam being on the 21st of December meant that we had to set off on the 16 hour greyhound journey on the 22nd, leaving just three full days for me to explore the city before I set off back to Blighty on the evening of Christmas day. I tried my best not to assume the role of tour guide though the refrain “when I was here in August” was all too often at the tip of my tongue. We ambled around Gastown, sheltered from the persistent rain at the Chinese Garden, cycled to the chilly Stanley Park where I expressed my wonderment at an adorable raccoon (considered to be pests), and took shelter from the downpour in a water taxi to Granville Island.

Gastown living up to its name.

Our very own aquabus. 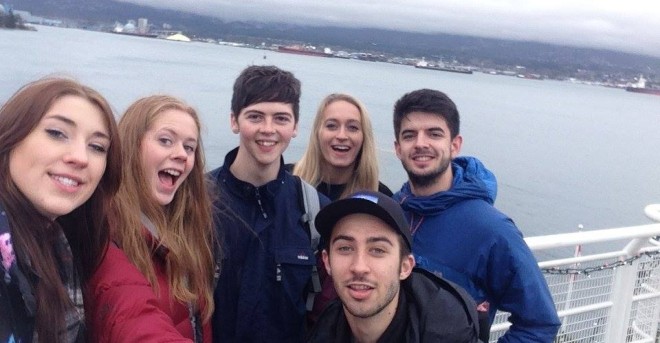 Calgarians reacting with awe at the sight of the sea. What is… ‘water’?

Christmas Day was unorthadox. The rain which had previously been relentless in its pursuit subsided, and I strolled to the dockside near our hotel in Yaletown in the morning just after sunrise to marvel at the peace of the waterfront. In typical Christmas day fashion we piled onto one bed to open our secret santa gifts and wish each other a Merry Christmas, admiring the view through the window of BC Place bathed in sunlight. Breakfast at ‘Wafflebant’ – a Chinese waffle establishment – wasn’t the most festive breakfast I have ever experienced though possibly the most delicious. A visit to the ice rink in Robson Square and a rather fancy Christmas dinner at a place called Forage (coincidently the restaurant my family and I first ate at upon arriving in Canada in August) made my first Christmas away from home certainly a wonderful and memorable one.

“The pace of life is accelerated and friendships are intensified, all due to the knowledge that the end is date stamped.”

Back in a surprisingly balmy yet rainy England just in time for Boxing Day tea, I was in a privileged position to be able to spend plenty of time with my family whilst relaxing by the fireplace with an inordinate amount of leftover food. Four months away from family and home friends is a long time and as well as spending a great deal of my nine days at home catching up, playing board games, and cooking a feast for friends on New Years Eve, I experienced what I can only describe as an emotional come-down from the relative chaos of my Canadian life.
Since August I really had settled into a new life filled with inspiring people and a miscellany of new experiences, often finding myself swept up in a euphoric haze 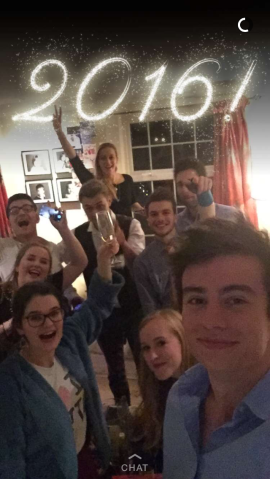 Bringing the new year in with old friends.

of excitement. The experience of a study abroad really is special and fleeting. The pace of life is accelerated and friendships are intensified, all due to the knowledge that the end is date stamped. Saying goodbye to international friends who would not be returning in January was an emotional affair. Typical that three of our dearest friends happen to live in Australia which is literally the other side of the world (who wants to live in eternal summer anyway…) On the bright side, this means that I can look forward to my globe-trotting days when I can be certain to find close friends on each and every continent – a privileged position to be in for sure.

Having now returned to the winter wonderland that is Calgary, I feel invigorated after my period of reflection and excited for the semester ahead. After kicking off the term with a Ski-Club trip to Kicking Horse in Golden, BC and lunching at ‘the highest resturant in North America’, I feel pretty on top of things once again. Plans are afoot which would have made the Emma of last semester pretty jealous.
Snowy love,
Emma
P.S. For an awesome visual memento of last semester, check out this video that my friend Matt made. Hopefully more visual content will come your way in the future:
https://www.youtube.com/watch?v=2O0nsNzXN2E 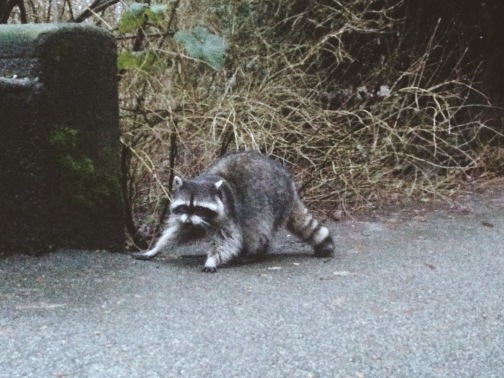 A new year. A new love for raccoons.