I’m having the time of my life in New Zealand. I’ve already been here on the South Island for 6 weeks, so I thought it’s about time to update you on my travels so far! 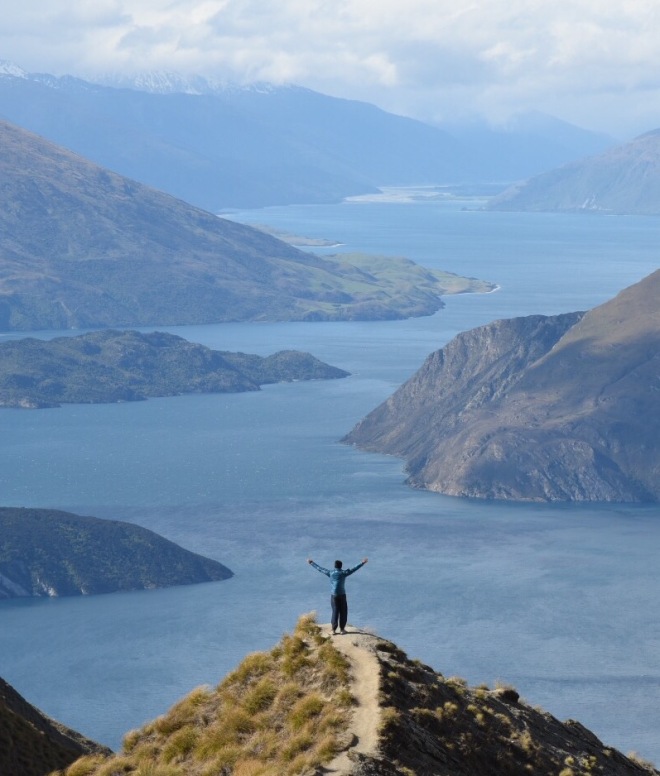 On Top of the World

If you’ve read my previous blog post, you’re probably wondering how the hitchhiking is going, or whether I had caved in and decided to travel by bus. Well, hitchhiking has probably been the best decision I’ve made so far in New Zealand. I’ve been given 33 lifts so far, totalling a distance of 2575 kilometres. That’s further than a flight from London to Moscow, for a bit of northern hemisphere perspective. I’ve waited sticking my thumb out by the side of a road for an average of 18 minutes, where the longest has been a 75 minute wait, and the shortest is no time at all – three times the first car I saw gave me a ride. 34% of lifts have come from local Kiwis, the rest have been from tourists. Phew, that’s enough stats for now!

Hitchhiking has been incredible for loads of reasons. Not only has it been free and I’ve not had to wait a long time, but I have met some awesome people. Getting a lift from tourists has been great because they stop at scenic locations so we can take photos, and they also venture to some locations off the beaten track that have been recommended to them – some of the times I haven’t heard of the places. Some have gone out of their way to drop me to a location I needed to get to, told me to tell them whenever I wanted to stop, get out and take a photo, and some have even given me food and bought me lunch. Getting a ride from locals has also been awesome, loads of hidden locations and ‘secret’ spots have been shared, tips about where to go, not go, and places to stay, and I’ve learnt more about farming in this last month than I have in my lifetime. All the kiwis seemingly want to tell me about dairy farming and the cows, or sheep and how lamb’s tails are cut off for hygienic purposes. I guess the stereotype about the love of sheep is true, and there certainly are sheep everywhere.

Each ride has been so interesting, but I’ll give you some more detail on my favourites so far. I was given a lift from Franz Josef glacier to a cool little town from a French chef and a Belgian named Pierre and Joella, and we stopped by a lakefront where he cooked lunch for us. I told him I was going to Hokitika, and heard of an amazing gorge there, so he decided he wanted to go there too, so we carried on to the exact place I wanted to go. I went cliff jumping and relaxed by this amazing gorge with perfect blue water. 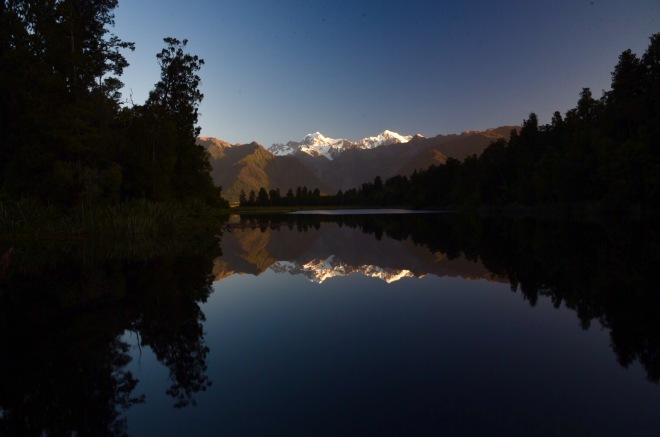 New Zealand is so good they made it twice

I’ve also been picked up by a professional German photographer, Christophe, who gave me some great tips about equipment, locations and other photography stuff. One time, I was picked up by a Kiwi Grandfather, Simon, who was also a pilot, and he recommended a walk to go on (Liverpool Hut Track), which has been the best hike I’ve done. Finally, my favourite ride so far was from these two Kiwi girls, who pulled up in Lake Tekapo in their rusty white van, with a lone mattress, a couple guitars and flutes, a banjo and an accordion in the back. I layed down on the mattress chatting to them – Kelcey is a farmer who milks cows everyday, and Bridget just graduated from the University of Otago (Durham have an exchange program there, and apparently it’s awesome) and is now travelling the world. They gave me a 200 kilometre lift to Wanaka (that place is ‘sweet as’, I want to live there one day) but on the way we stopped at a supermarket where they bought me New Zealand stuff I had to try, like L&P lemonade, chocolate fish, ‘scratchies’ and some other food. We then stopped off at a river they knew of, and went gold panning, which was pretty epic. Oh, and then we picked up another hitchhiker (there are a few here!) before heading off to Wanaka. The only bad thing about hitchhiking is that some towns don’t have those massive tubs of nutella, so on some hikes I’ve been doing I don’t get my chocolate-spread-straight-from-a-spoon fix, which would have been possible if I had a car to stash them, but oh well, you can’t have everything I guess. 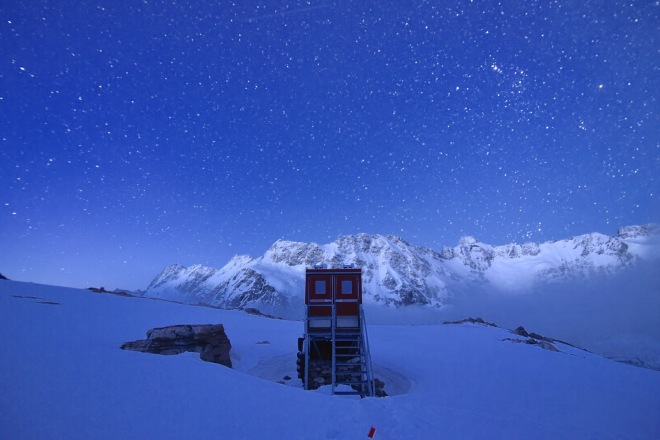 Even the views from the loo aren’t bad

I’ve ticked things off on my bucket list that weren’t even on my bucket list in the first place – some of New Zealand is that unimaginable. A lot of these experiences have come from tramping New Zealand. Tramping is the kiwi word for hiking, and it really is a lifestyle here. In total, I’ve tramped 86 hours over numerous short to long multi day walks. I’ve crossed thigh deep rivers, slept above the clouds, hacked through rainforest and got lost, climbed 4 mountains and many more peaks, stopped and gazed at endless waterfalls, trudged through knee deep snow only to give in and slide down the mountain on a bin bag on my bum. I’ve come away with battered feet and many more cuts and bruises, but the views have been worth every step, leap and crawl. It’s also not that bad considering some of the tramping is quite dangerous, they’ve been quite a few deaths around New Zealand’s tracks, but that’s mostly been after rain or snowfall when avalanche danger is high. 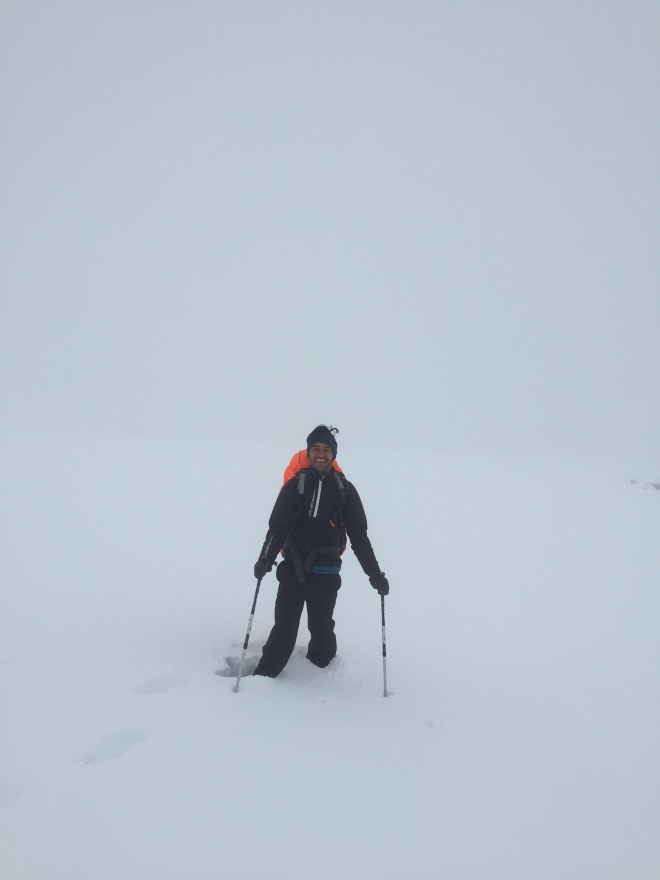 I heard there was snow in Durham?

Along or at the end of many tracks are huts, where I’ve stayed many nights. These huts are basic shelters, and have rainwater collection tanks for drinking water, up to 20 padded mattresses in one bunk room, and that’s pretty much it. Some of the more luxurious huts have a warden to keep things in check, along with a fireplace you need to chop wood for, and even solar powered lighting. When I’m not staying in huts, I’ve been doing a fair amount of freedom camping, and along with that I’ve watched some magical sunrises. In towns and villages you unfortunately can’t freedom camp, so I’ve been staying at a few hostels. This has been amazing too, and I’ve met some incredible people – from a Canadian national snowboarder from Yukon, to a guy from Norwich who gave me a book my friend told me I had to read (it’s called ‘Wild’, a great read), to a girl I passed that same book on from Austin, Texas, on exchange at the University of Sydney. I’ve also received a few lifts to some hard to get to hikes from people in hostels after chatting to them. 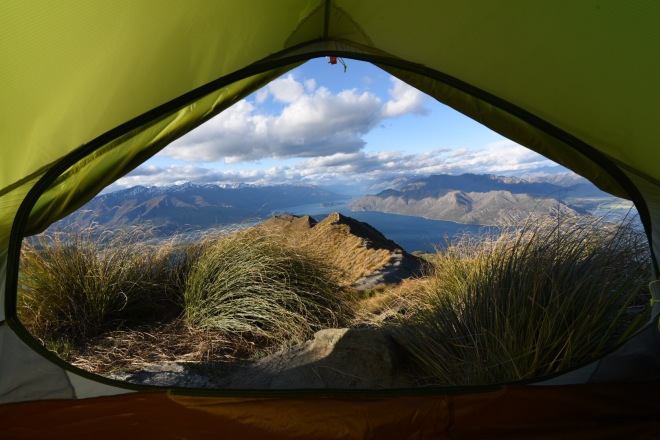 Room with a view

Also, MERRY CHRISTMAS!! I hope you all had an awesome day. It was a bit weird not being able to spend it with my family, but I did the next best thing and went for a 7 hour hike to this hut in the middle of nowhere to spend a couple nights. This hut was a little bit more special to the others I’ve been staying in – right next to it were natural geothermal hot pools. I spent several hours just relaxing in these, watching the stars and staying till sunrise, which was a highlight of my trip so far. 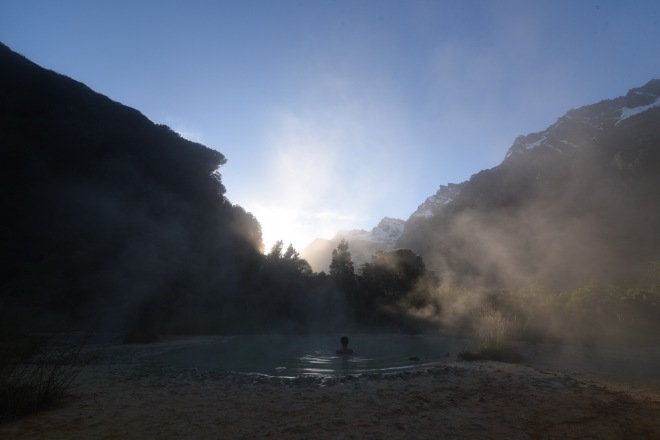 Chilling on Christmas morning in my hot pool

I then made friends with the hut warden, who invited me to go hunting the next day. So on Boxing Day at the crack of dawn I went on another 3 hour scramble to a location he knew well, and he shot a chamois (like a mountain goat) as I looked on, and soon after all these other chamois were running down the mountain metres away from me, scuttling away from the warden as he was perched on top of a rock in front of a 40 metre waterfall. It was one of the most incredible experiences. I should mention that the chamois animal is classified as a pest in New Zealand, along with possums (we caught one in the morning) and stoats. Franz Josef brought them to New Zealand in return for native flora and fauna, but now their population has expanded rapidly, which has led to destruction of native plants, and are a threat to the local ecosystems. The excellent Department of Conservation here, along with trapping and poisoning methods for other animals, encourage hunting chamois and tahr, which were also introduced by European settlers. We carried the carcass back to the hut, where he was going to make a stew for future hut visitors. He also gave me some prime cuts of the meat, which I ate for dinner a couple nights ago, and it was the tastiest meal I’ve ever had. So I had a pretty adventurous Christmas! 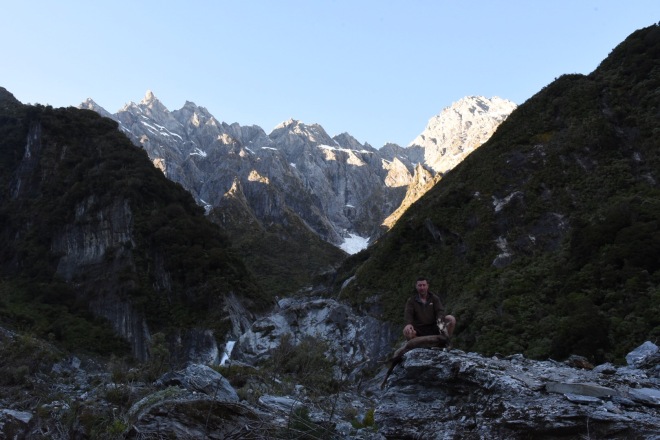 The warden and chamois

The plan now is to spend a couple more weeks on this amazing South Island, doing a few more multi day tramps including another Great Walk (one of 9 ‘extra special ones’ in New Zealand). I’ll then hop over to the North Island where I’ll spend my last two weeks here, before heading back to Perth, via Sydney for Australia Day, for my last month of holiday. I’ve been away from Facebook for all my time here, so apologies if I haven’t replied to a message! I’m accessing it today but then I’ll be off it again until I get to Australia.

Congratulations to everyone who just got accepted onto a Year Abroad program!
Back to the Wilderness I go,
Neal