With the last puente before Christmas upon us I wasn’t about to miss another opportunity to strike off some of the Spanish destinations on my to do list. This time we ventured a little further afield, to the highly-recommended seaside city of San Sebastián, and I can wholeheartedly say it didn’t disappoint.

We arrived Thursday at midday, and once we’d found our temporary air bnb landlady (on the monumental bridge which frames the river as it runs through the city and feeds out to the ocean), we dropped our bags and headed straight out to explore. My immediate reaction was that it was much more of a metropolis than I was expecting. I guess it’s because when I think of a seaside town I think of some sleepy retirement destination on the Suffolk coast with a cluster of pubs, a chippy and a sweet shop, without much else. It was interesting to see how much more French it felt compared to Tudela, being so much closer to the border. The giant bridges did bring to mind le pont des arts and some of the flats in the centre of town just reminded me somehow of Parisian architecture. Not surprising when there were signs for France even in the centre of town – apparently only half an hour’s car journey away! In fact, we were so close that the television in the flat picked up French TV. I was able to comfort myself with this as although it was definitely very rusty, I realised that I hadn’t completely lost my ability to do basic French. In fact, when approached in the street and asked by a random Frenchman for some money, I managed to let “Pardon, je n’ai rien” fall out of my mouth without needing to think about it too painfully (French speakers will understand how thrilled I was to have not fallen into the trap of saying “je n’ai pas rien”). The food seemed very Frenchified as well – as well as the normal assortment of pintxos, many places also offered a rich sort of cuisine with more foie on the menu than in Tudela.

Having arrived at midday, by the time we rallied the troops we were starving. But I have to say, it was worth the wait when we stumbled upon some authentic-looking bar where I had a goats cheese risotto with black rice – black rice!!! 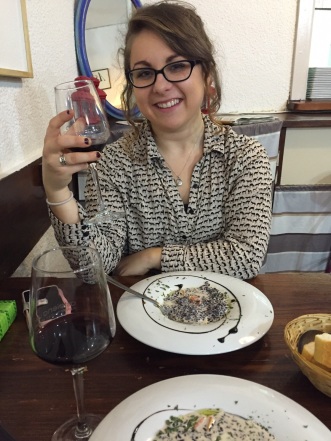 After a hearty meal we finally found the beach, which certainly did not disappoint. I can imagine in the summer it must be packed, but the beach in winter still holds something special for me. It must stem from fond childhood memories of going for a walk on the beach in all weathers, often on New Years Day with the dog. By this point the sun was setting and I got some cracking shots which capture about 10% of how beautiful it actually was.

We also managed to pop into a temporary exhibition for the French director Georges Méliès  as part of the Obra Social of the Spanish bank, La Caixa. Interestingly, most of the exhibition was either in French or Spanish, so I had all the trilingual muscles in gear.

The best part of the day though had to be going up in the cable car. Unfortunately and inexplicably for a Saturday, the little theme park/funfair at the top of the mountain was closed, which was a little spooky. Still, it added to the wonderful peace and quiet of San Sebastián which was one of its most attractive features. 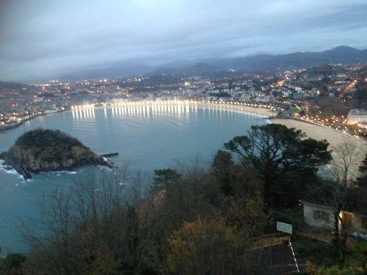 And of course, we wouldn’t have been doing San Seb right without sampling the famous pintxos, which I have to say were another world away from Tudela’s. I love cheese so much. 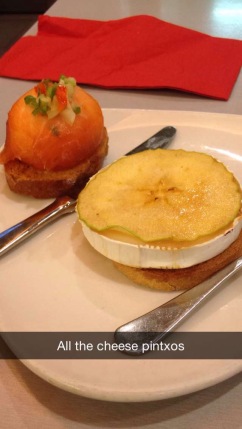 That very morning when we woke up, one of the other language assistants from Slovakia checked her Facebook (we had wifi in the air bnb!) which reminded her that it was her name day. Apparently in Slovakia, when it was under a communist government every day of the year corresponded to a name, and if you chose to give your child one of those names you basically had a second birthday. We took this as an excuse to go for a three course lunch where we’d found a deal for 18€, wine included. This decision was not a regrettable one. Pumpkin soup with shavings of jamón, freshly cooked lomo with a mix of peppers and onions, followed by a traditional basque pastry dessert; pantxineta.

We decided to continue the celebration with a glass of cava in the evening, where the conversation led to the basque language. Although quite a lot of the basque influence spills over into neighbouring Navarra, we felt like we’d really stepped into another culture in San Sebastián. So many road signs and the street names were almost impossible to read – not so handy when in a new place where asking for directions was pretty necessary. We even saw a busker (yay busking!)  busking in basque (trying saying that 10 times quickly – I might get my students to if they’re mean to me this week). So we ended up doing a brief google of Euskera, being the language nerd that I am (and being happy for the company of a recent graduate of a masters in French linguistics) we discovered that it pre-dates any Indo-European language of which we have record today, and its possible predecessors and etymologic roots are still being debated. Basically, it’s the linguistic equivalent of Easter Island. So fascinating.

How does one even read

Lastly I would really recommend hiring bikes in San Seb to anyone who goes. You can just go for miles and miles by the beach, and while there are some pretty cool hills and mountains to climb up, you can just as easily keep going on the cycle lanes which wind around the beach. 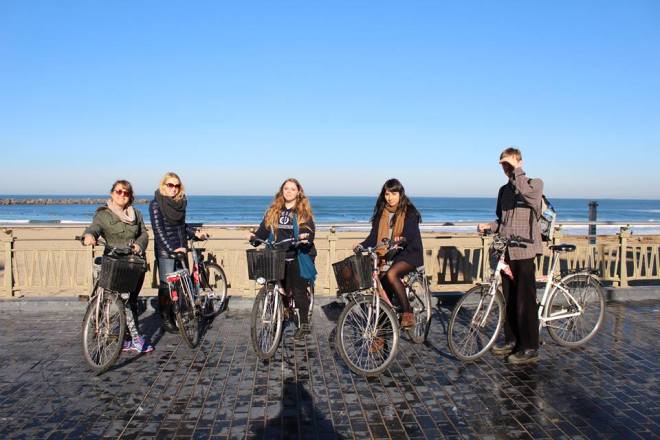 be in the biker gang you’ve always dreamed of

It’s weird to think the next big trip I will be doing will be back to England! Here’s to hoping the Norfolk coast is equally as sunny and calm…

2 thoughts on “San Sebastián is beautiful and you should go”