So much has happened in the last few weeks that I can see this taking up several blog posts! I’ve also got a few posts saved on my laptop, they’ve just all built up over the hectic last few weeks – they’re coming soon, never fear. I think it’s best to put everything under separate headings and dive right in…

Being a Tourist
One of the best things about living in a new city is that there is just so much to explore. I have studied Classics in some form or another since I was 11 years old, and the majority of the things I study I have never seen apart from on a blurry photocopy handed out in a 9am lecture on a Tuesday morning. I’ve spent years studying classical texts, beautiful statues, enormous temples, and many other things which are the legacy of the classical world without ever having seen the physical objects in person. And the desire to see the things I’ve studied was the main reason for my choice to apply to La Sapienza in Rome for my Erasmus year.

When I first arrived in Rome, I bought this fairly useless map of Ancient Rome for about 3€ from the Vatican Gift Shop (yes that exists…you can also pick up Papal Blessing Order Forms from there, because redemption is that easy). The map definitely appealed to my inner classicist, so I bought it on a whim – it has actually turned out to be very useful: I’ve been using it as a checklist for ‘Classical Things I Want To See’. Here’s a little bullet list of things I’ve seen…: 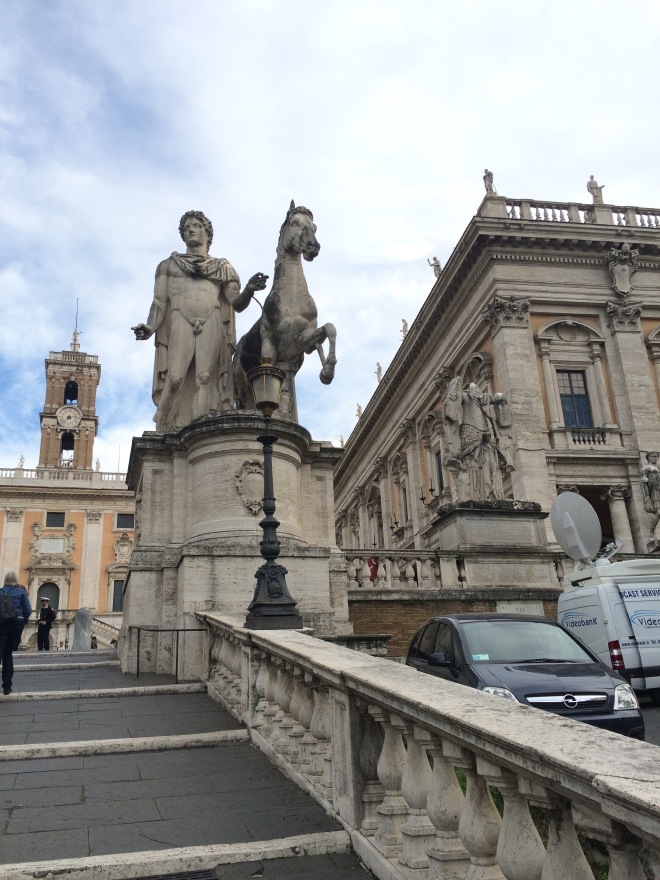 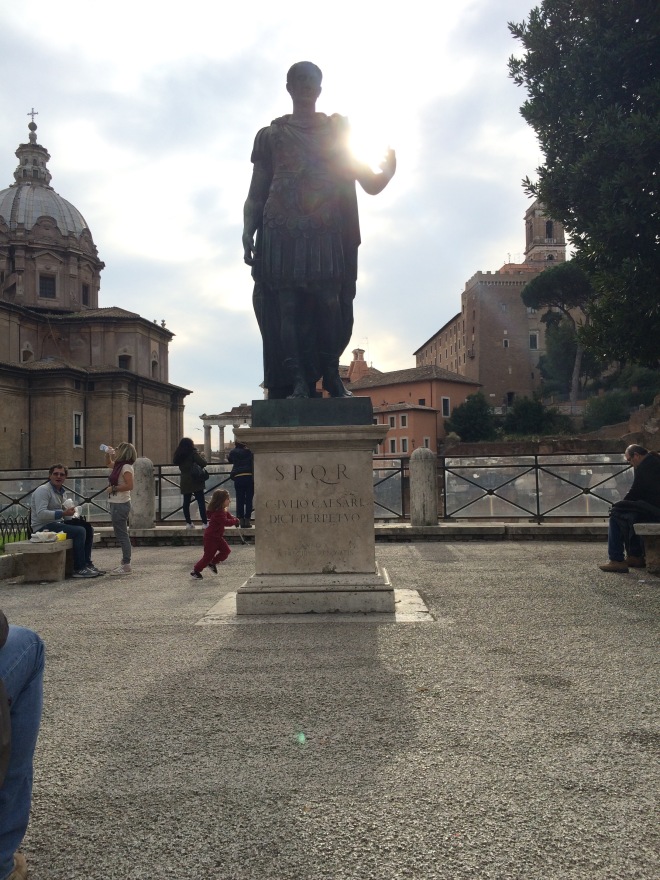 J. Caes with the sun behind him, looking very imposing and DICTATOR PERPETVO

The main point of an Erasmus year is attending university. If you’re reading this and are unsure about whether to go on a year abroad because of fear of the university or uncertainty about the lectures, then open your ears kids, for I am about to tell you what it’s like over here in Italy!

First things first: it’s not easy. I won’t say that I came over here expecting it to be easy, because that would be ridiculous, but I was confident in my grasp on Italian and I didn’t think I would encounter any serious problems. Well, thankfully, I still haven’t encountered any serious problems, but it is surprisingly difficult to follow a lecturer whilst they’re speaking another language. I have found that when I am writing in Italian, my ears shut and I just can’t listen to what he’s saying, and vice versa. This causes some issues when my ears then re-open for business and I discover that we are 5 points down the line and I missed the important first bit. HOWEVER, there is always a solution and my solution is: a voice recorder. It’s very useful and I can go back and replay it as many times as I want. One other point to note is that Italian lectures LAST FOR 2 HOURS. TWO HOURS. They are supposed to give you two 15 minute breaks, but it entirely depends on the teacher. And if they just want to talk at you for 2 hours, then you’d best believe that they will…But despite the initial shock of getting used to foreign lectures, I have found myself really enjoying classes. The 2 hour classes (admittedly) give the lectures plenty of time to explore the subject and the classes feel less rushed than they can sometimes do at home. 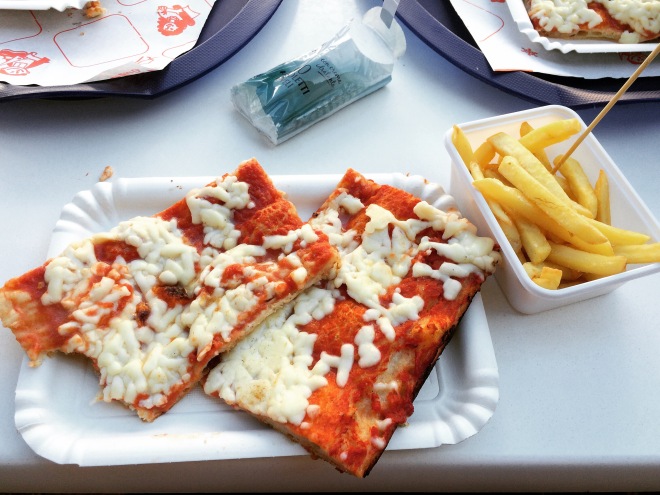 Slightly undercooked but very very yummy lunch after a morning of lectures. It was 3€ for everything, wow

A concern of mine – and many other people who go abroad – was whether I would be able to make Italian friends over here. Many students have told me “I could only make friends with Erasmus people” and I was quite worried. But in all honesty, I have yet to meet a single Italian student who has not been welcoming, friendly, and very keen to talk about London. My advice if you’re going on a year abroad is: just put yourself out there and talk to people. The worst they can do is just look at you blankly, so then just move on to someone else! But, I promise, the majority of people will be more than willing to be your friend. They’ll even show you fantastic, amazing gelaterias which are known only to the locals themselves. It’s a win-win 😉 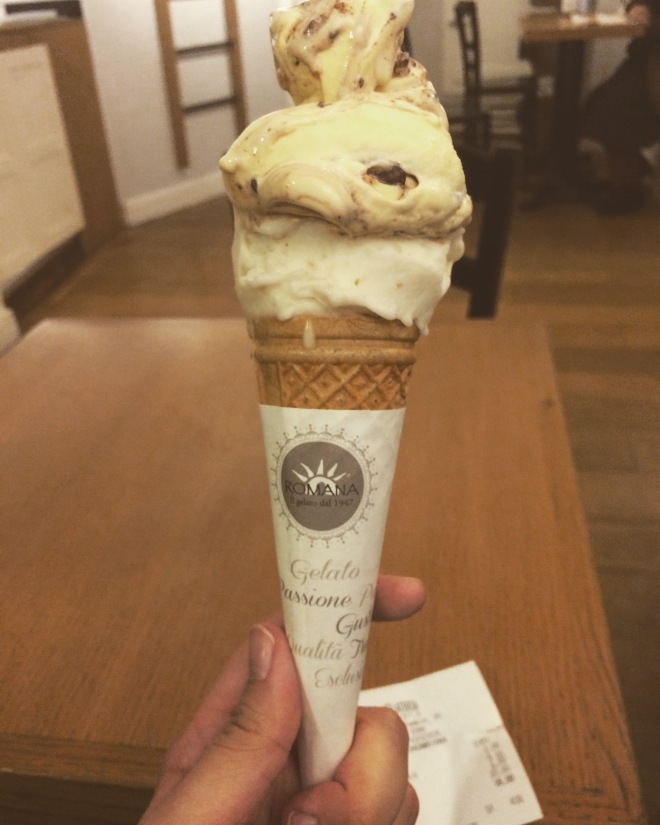 Genuinely the best ice cream I have ever, EVER eaten. Pear & ‘biscotto della nonna’ (biscuit, chocolate, something else elusive but yummy), with melted white chocolate in the cone. For 2€!

Well guys, that’s all from me for this post. It turned into more of a post about Year Abroad worries and how mine were unfounded – but I am an artiste, my writing is my medium and I cannot impose constraints on my work…(that’s a joke)! Join me next for some Italian Adventures, including my 21st birthday, breakfast by the Colosseum, and James Bond in Italian.