Montreal is a city that got its name from the three hills (or mountains) it is built on. It is situated in the state of Québec which is French-Speaking and about a 5 hour megabus journey from Toronto. Considering it takes 2ish hours from campus (via Hamilton) it takes a good half a day to get there.

Being the lucky girl that I am, with my three day weekends thanks to my heavenly timetable, I was able to sleep in and take a leisurely lunch before setting off for the city break. As we were travelling in two groups, and staying in two separate AirBnBs, it worked out as $48 each for two nights. Add on $130 for transport and we’re winning.

En route we stopped in Toronto which, even though it was my first visit, was brief yet enlightening. We had an hour and a half to burn in the city which was astounding to me. The sky scrapers and office blocks seemed a million miles away from the quaint little town of Westdale, and for the first time I felt the onset of culture shock.

Amy and I took a few cheeky photos by the Toronto sign (where they apparently erect an outdoor ice rink in Winter), and demolished a burger each in Denny’s. This was a true North American diner, with bottomless cokes, maple syrup on the tables and ice cream floats for sale.

A lot fuller and a little sleepy we boarded our megabus and began the 5 hour journey to Montreal. We would arrive at 11.30pm and fully planned on going to a few local bars after dumping our bags. We did just this, and met some lovely French people who were in the country for internships. One of the males has definitely had a drink and was determined to get me to dance in the middle of the bar. Reluctantly spinning under the arm of a very drunk Frenchman was not the experience I had imagined I would be having, but was fun all the same.

The night was bracingly cold, and for the first time I was wearing my winter coat around the town.

The next morning Amy and I arranged to meet with Matilda, the daughter of one of my Dad’s friends from university who now lives in Victoria, BC. She is studying at the university of McGill and making the most of living in one of the most vibrant cities in Canada. We ate in a poutinery, which served fry-ups with free side of fruit, orange juice and coffee. The Canadians in Québec certainly know how to do breakfast.

On Matilda’s recommendation we took the Metro to the old town and spent some time walking around the typically tourist-y areas. There was a square that was particularly reminiscent of Europe, with cafés and restaurants open onto the streets covered by awnings. The streets were dotted with souvenir shops and art galleries, we found a real fur shop with a stuffed polar bear in the window – controversial! My highlight was a First Nations shop that had some really beautiful jewellery and trinkets, as well as gorgeous hats, gloves and scarves. 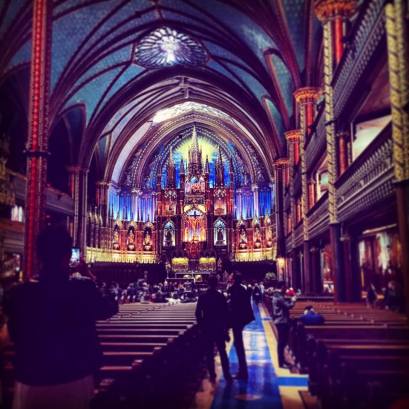 We grabbed a coffee and head to the Notre-Dame basilica, which interestingly has no relation to the one in Paris. Here we met the others and paid $5 to enter, which was definitely value for money. The interior was beautiful and impressive, with rose windows in the ceiling, eleborate, vibrant blue decoration at the alter and a fascinating pulpit that is known to have been occupied by Pavarotti for one of his recordings. The organ was enormous with thousands of pipes, and we learnt on a free tour that the main bell in one of the towers required 14 people to try and ring it. There was also a lovely, more modern, chapel out the back which was swiftly closed for a wedding, the procession of which we saw entering shortly afterwards 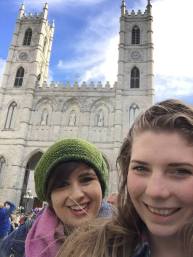 It was time to head to St. Catherine’s street to get to the high street. Unfortunately, I’m yet to find an adequate waterproof winter coat for under $300 which is worrying as the cold has come overnight. I made the most of the cheaper clothes prices and we began our walk home, stopping at a sushi restaurant on the way. You will never be short of great Japanese cuisine in Canada, there seems to be a big following here.

surreal experience of my time here yet. Montreal is known for being the gay capital of Canada, with a brilliant LBTQ+ night scene. I’d never been to a gaybar before, and this certainly lived up to my expectations. I had a brilliant night at Unity club surrounded by people in extravagant outfits dancing to great music, and cannot wait to go to somewhere like that again. It was a completely different dynamic to anywhere I’d been before and I recommend it to anyone with an open mind who’s up for a good time. 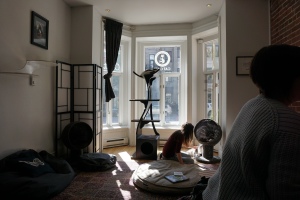 This morning, we slept in and went for a late morning stroll downtown to find some brunch. We stumbled upon the legendary Cafe du Chat we’d heard so much about from the locals, and sat drinking coffee and green tea surrounded by very tame cats. This was lovely, and would be a great concept to bring to any university town, I would love to study in a cafe such as that because it was very homely. After a brief photoshoot with King Kong (a chubby cat wearing a crown) we went on a hunt for bagels and spent a while feeding crisps to squirrels in a local park, then browsing vintage shops before running to catch the megabus home. 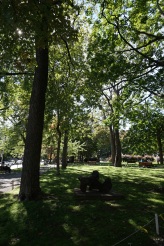 We had planned to climb up Mount Royal which apparently gives brilliant views of the city but unfortunately ran out of time. I will definitely be returning here again, because the opportunity to practise my French is too tempting. Time to get back to reality; to the assignments and midterms. However, it’s Amy’s 21st on Thursday so we’re going to a thanksgiving dinner, and 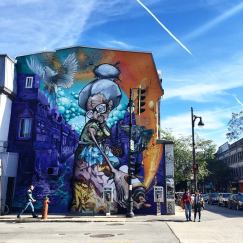 my parents arrive that night. They will be spending a few days in Hamilton with me before we fly to New York City for the midterm break – exciting times!!! The fun never stops…