Okay, so I’ve now been in Heidelberg for a month and it’s safe to say that I’ve learnt a lot.  Owing to the fact that I’ve just been doing a Sprachkurs (language course), I’ve been able to have a lot of fun, but of course there have been many, many things to get used to in moving to a new country and uni!

You don’t have to leave H for a beautiful view 🙂

Here’s what I’ve learnt in three, roughly sorted headings.  There’s just too much to say, but I think I’ve got the most important things down in kicking off life at H:

Whilst we’ve been doing a month-long Sprachkurs, it’s very often felt like a month-long ‘Freshers week’ – during which time you also acclimatise to German as much as poss (if, like me, your German is decidedly rusty).

The Sprachkurs is useful, but it’s been a lot more fun & useful to speak and listen auf Deutsch wherever and whenever, be it in a smoky bar in the Unterstraße or in the breakfast area of the Sprachkurs which pumps out music like some bizarre club…  Of course, the more you try to develop your speaking and understanding, the more numerous your mistakes can become, but you’ll also learn so much more – and it’s quite funny.

Two weeks ago I lost my beloved Hertha BSC scarf.  It’s blue, with the Hertha logo and I’ve had it since I was 16, so it’s valuable to me.  In looking for it outside a bowling bar I proceeded to ask some German people passing by if they had seen anything, namely:

‘Habt ihr meine blaue Scharf gesehen?’ in slightly tipsy (or beschwippst) German.  Quizzically, they looked at me and one of them, a kind old lady replied slowly that they had seen no ‘Scharf’ that evening.  As she slowly emphasised ‘Scharf’ it suddenly became clear:

Quickly, I cleared up the confusion.  In perfect harmony the group smiled at me and I was told that they had also not seen a blue scarf that evening.  I hesitate to guess what they thought, but they were friendly enough and, eventually, I found my scarf. I like to think that was the product of some trying to speak good German karma…

In our language class, it’s a bit like school apart from we have a bit more freedom, like being able to leave the room whenever we want for a bit, such as to go to the toilet.  I’m not sure how this started, but generally one makes a quiet announcement of where they’re going e.g. getting a drink, getting a tissue, going to the bathroom – naturally in German, as we’re only allowed to speak German in class.

But one day one of the bolder members of the class, Pedro, confidently announces ‘Ich gehe ins Bad’, leaving the class rather surprised.  Now, our class is a relatively high level (B1.2), so the mistakes we tend to make are grammatical or errors in sentence structure whilst speaking.  So Pedro announcing that he was going for a ‘bath’ mid-class was a rather unusual error – but one that is bound to happen if you’re speaking enough German.  What he’d meant to say was ‘Badezimmer’ (bathroom) of course.  And at least, this means that we won’t make this mistake in a situation that actually matters.  Then again, he was gone for quite a while, so who knows where he actually went…

So many people, so much German, so many funny mistakes!

Punctuality: No, it’s not a different ‘mindset’, but a way of life here.  Maybe it’s in the sparkling water or Pils that your typical German drinks.

At first, it’s tricky, even a little annoying as after arriving once 5 minutes late for the Sprachkurs I received what can only be described as a death-stare from our usually extremely amiable, elderly German teacher.  It was if his eyes metastasized for the brief 30 second explanation of why punctuality was important not just to him, but to all Germans.  It was so important that rather than arrive 5-10 minutes late, people in our class prefer to sneak in after the breakfast break, so as not to interrupt the lesson.  So punctuality – just do it and don’t ask questions.

To be honest, I’ve actually really come to like this whole punctuality thing and tried (and failed) to give out a few death stares of my own.  I’ve got nothing but time…

Bureaucracy: Doing a bit of paperwork each day helps to prevent the pain of having to register for every little thing.  Or at least that’s what it’s supposed to do.  Actually I think it just becomes overwhelming anyway.  Keep all your documents organised and if something goes wrong or if you’re unsure, just tell someone straight away.  It’s a bit like playing a really long table tennis rally, but not fun, very repetitive and whichever opponent you’re facing just keeps sending the ball back your way.  I’ve loved pretty much everything about Heidelberg so far apart from all this form-filling and registering.  However, whenever it gets a bit too much, I just think about what it’s for – and it’s more than worth it.

MENSA: Where German students feed.  They just do it so much better in Heidelberg.  You only pay for how much your food weighs and it’s just so cheap and tasty.  For example, I can have a big plate of Schnitzel, Potatoes and lots of veg for about €4.30.  As a result, the Marstal Mensa, which is the most popular in H, is also a particularly good place to meet up and I have spent many an evening there with friends as the food, coffee & beer is just so cheap.  Enough said.

Another benefit of arriving a month early to do a language course is that it’s only in the morning, so you have plenty of time for exciting trips before a busy term starts.  Here are the trips I’ve done in the past month: Bad-Durkheim festival, a hike in the Black forest, Oktoberfest, a visit to Dachau concentration camp, Munich & Volksfest (a smaller version of Oktoberfest, but in Stuttgart).  I can recommend all of these – they’re a great way to meet people and see the Germany outside of Heidelberg.  Heidelberg itself is just beautiful as well.  Oktoberfest in particular is just amazing!  Anyhow, here are a few pictures to end this post: 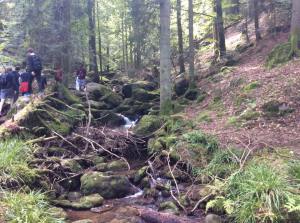 Just chillin at the Castle!

On the 12th Oct, term begins, so I hope to make the post a bit more academically focused!