I guess there are two ways you can read the words ‘study break’ – a break during which you study, or a break from study. You can probably imagine which choice I made.

I’ve been incredibly lucky to travel to some amazing corners of the world and see some incredible places, but nowhere has been as jaw dropping as Karijini National Park. I could place you anywhere in that park, and you can stay in that one spot for hours, swiveling your head at any angle, while standing in awe at the looming canyons, narrow gorges and tranquil pools that engulf you.

But it is in the middle of nowhere (like everything else in Australia) – to get there is a 14 hour drive. So we planned a 10 day, just under 4000 kilometre roadtrip.

Australia is big, if you didn’t know

Two Norwegians, two Dutch, two English, two Americans and one German were squished in our two tiny rental cars, along with all our camping equipment and food; I’m pretty sure we could complete a game of Tetris now. Half of the trip seemed to be driving, which was surprisingly enjoyable – endless straight roads, seeing no car in sight, and the barren yet ruggedly beautiful Australian landscape let you drift off and imagine what the world was like when man hadn’t invented electricity (or even further back), and when people weren’t soldered to their own electronics. It’s so crazy to think how far humanity has come, from a place with nothing but raw materials from the earth, to being able to communicate and get to the other side of the world so easily. But then you are brought back to reality, by seeing the fourth deadliest and one of the most dangerous animals in Australia.

Endless Highway at night. We camped just to the right of this picture

Now, I’m sure some of you were ‘aww-ing and aaah-ing’ at my kangaroo selfie. I was excited too to see my first kangaroo. But you see, I was an inexperienced naïve tourist then. Now, I wish I didn’t see any roos. We must have passed at least 20 of these animals dead on the road, because cars, utes, roadtrains have hit them. Behind the cute exterior and fascinating hopping ability, they are utterly stupid. They jump into the middle of the road when a car is driving, which inevitably leads to their death. Unfortunately, this could lead to bad consequences for the driver too (the car also gets wrecked). So, in true Australian fashion, and as a rite of passage to become a bogan, we hit a lil’ roo. We saw it, and my friend pressed her pedal to the metal (brake, not accelerator fortunately), but we still hit it, around 30km/h. Our front bumper buckled, and the fog light was smashed. Sadly, we saw the kangaroo hobbling away severely injured – luckily, we were ok. 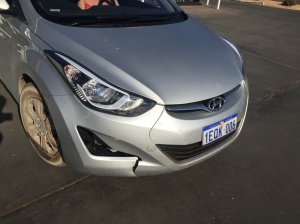 On the topic of stereotypical aussie animal experiences, I’ll tell you about the other wonderful creatures of this land (and sea). I told you I’d keep you updated with sightings, so here is the latest part of animal watch…

Surely I’ve run out of animals to see now.

One last way we nearly died, we were travelling through the outback to Karijini, again with no cars in sight, and our fuel bar was blinking, with ‘0km left’ shown on the dashboard. We had 50 kilometres to go, and flashbacks of the Inbetweeners 2 movie were going through my head. We made it to the town of Paraburdoo, and I’ve never been so happy to see a fuel station. Paraburdoo, like most ‘towns’ in Western Australia, is tiny, but they do have a football team. For the fuel they provided, and the relief I experienced, I am now a proud supporter of the Paraburdoo Saints Football Team. (Aussie Rules Football, I’m still a Broncos and United supporter!)

I won’t bore you with each day of our trip, but I’ll give you some highlights and let the pictures do the talking (although no picture possible can convey how incredible Karijini was).

Only in Australia would they have a pink lake

One thing about me, I don’t really like touristy destinations. I prefer the place to myself, without noisy distractions or being moved along like a conveyer belt. That’s why I love Western Australia. There is literally no one here (well there are a few people) and all the amazing spots are practically empty. I guess the reason for this is that Western Australia is pretty remote, and when people decide to go to Australia they go to the east coast. Which is fine by me.

Ningaloo Reef is WA’s version of the Great Barrier Reef, apart from way less people, and the reef is right by the beach (GBR you have to take a boat). We spent 2 days snorkeling and laying on the best beaches in Australia. Turquoise bay, voted second best in Australia, was out of this world. You step off the white sand, and are immediately transported into a world where thousands of vibrant massive fish are swimming around you, coral hiding the shy fish, and then you see the odd turtle, shark or stingray. You let the current drift you along, don’t have to swim (its called drift snorkeling), parallel to the beach, and then after a kilometre or so exit to the beach, and then repeat this process to your heart’s content. Well, until your head can’t comprehend the amount of animals so you have to lie on the white sand in 34 degree heat with turquoise waters right in front of you. (sidenote, I didn’t see one cloud on the roadtrip, until the last day)

Reef in the background, Turquoise Bay in the foreground, white sand everywhere else…

Moonrise and the stars at Sandy Bay

Now for Karijini. I don’t really know of any words that can do this place justice. They say Spanish is a beautiful language, but I’m pretty sure Spanish can’t do this place justice either, and my Spanish isn’t very good. My photos don’t really show how amazing this place is either, so I’ll just have to say it’s the best place I’ve been in my life and you’ll have to either believe me or go there yourself. I’ve decided, if things go to plan, after uni ends in June, to spend a month there. I don’t like going to the same place twice usually, or for that long, so that says something about this place. 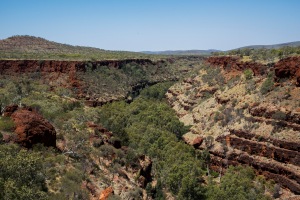 You have gorges and chasms between gorgeous red rocks where you wade through the water on the trail, you hike and crank your neck to see the red rock of the canyons towering above you, with cracks to see the sky peeking it’s way through. You have to swim during some hikes to get to the next spot. There was one trail called ‘spider walk’, where you have to cling on to the red rocks of the canyon either side of you while water rushes underneath you. You reach circular pools, waterfalls, and I found 7 cliffjumping spots.

I usually love my sleep beyond words, but while I was here I woke up at sunrise every day to go exploring. One morning, I woke up at 2am to hike Western Australia’s second highest mountain (1236m) with my friend. Lit only by moonlight and our two headtorches, we made it to the top at 5:15am, in time to see the sunrise. The mountain was called Mount Bruce. I can’t think of a more Australian name for a mountain, and if you’re gonna climb one mountain in Australia, it might as well be called Bruce. It was beyond spectacular.

Big Bruce, a long exposure with the moon lighting the foreground, stars in the background

Sunrise on top of Mount Bruce

So I’m safely back from the outback, and am now planning my Christmas break (I get 3.5 months holiday, don’t hate), but I also have to work now. Good luck to all those starting at Durham and to those going back, a very very small part of me does wish I was back at John’s with you guys there!

Here are some more pics of Karijini (click to enlarge)…

2 thoughts on “West is Best”