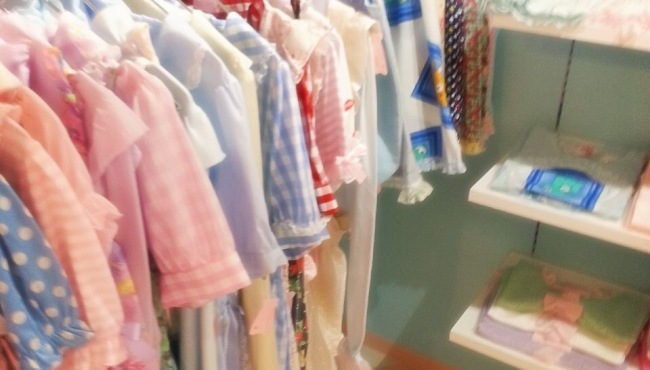 Okay so you were probably expecting something about my new daily routine and my immediate surroundings as a first post from me. This will come very soon. My priorities in life, however, have always been 1.Harajuku 2.Everything else.

So Harajuku. What’s that? Basically it is the actual best place on Earth. It’s known as the fashion capital of Tokyo (which is one of the fashion capitals of THE WORLD) not just for its abundance of big brand labels, but more importantly its rich rich fantastical amazing magical colourful artistic fashion subcultures and individual stores. I’ve been all over fashion in Tokyo online for years. I actually have my own blog dedicated to fashion in Tokyo. I’ve always had an out-there dress sense, and what I’ve seen of Harajuku online – the designers, the stores, the famous models, and just the snaps of ordinary people looking fabulous in the street – is a big part of my inspiration. Naturally, it was to be my first port of call.

My first experience of Harajuku just reinforced in me the feeling that it was my spiritual homeland. After travelling just thirty minutes from my new home, it was like I had arrived after a long pilgrimage.  From the station you walk down this famous street, Takeshita-dori, FILLED WITH THE BEST STORES EVER. Everything is shiny, pink and fluffy, there are sweets everywhere and the platform shoes are unreal. Everyone looks amazing in their own creative way. There are all sorts, from lolita to goth to what look like people who have literally just been dressed by Vivienne Westwood for the runway. And everyone is so accepted – Harajuku is a place where fashion is respected as art, and nobody would ever look down on you for what you chose to wear. Of course, I made sure I was dressed equally as fabulously for the occasion of my first visit. In England people sometimes said I looked weird. Here, I’m just part of it all. In an ‘I’ve found my home’ way, not an ‘I’ve lost my individuality’ way. It’s the best. 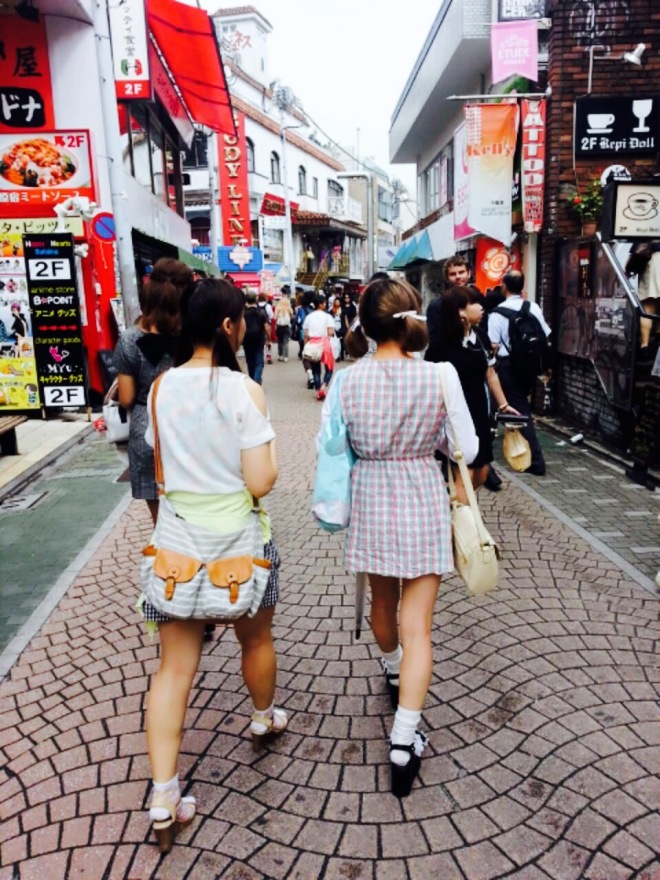 Oh yeah and EVERYONE digs socks and sandals here. They thought I was crazy for positing the idea a few years ago in the UK.

I had some favourite Harajuku things I was hellbent on finding when we got there, and I dragged everyone round trying to get to them. Among these were Sebastian Masuda’s 6%dokidoki store and his clock sculpture, Tokyo Bopper and Candy Stripper (which isn’t like x-rated by the way).

Tokyo Bopper is a shoe store with the best platforms ever. I’ve been admiring them for years via tumblr and getting to see them in real life was insane. I will buy some with my student loan. Likewise, Candy Stripper has the best selection of clothes, and the coolest fluffy platforms in the world. For more info you can check out the Tokyo Bopper and the Candy Stripper websites. They didn’t want me to take pictures – obviously their stock is too precious. The online stores will blow your mind.

Sebastian Masuda is an artist and designer famous in Harajuku as a pioneer of kawaii culture and fashion (for those of you unfamiliar with ‘kawaii’, it means in ‘cute’ in Japanese, but it’s also a cutesy way of life). Sebastian is actually in the U.S. right now with his art exhibitions! But the somewhat internet famous store staff at 6% dokidoki look after it very well, documenting each day on Twitter and tumblr. First I went to see his clock sculpture on the side of the visitor centre ‘Moshi Moshi Harajuku’. It’s quite a famous Harajuku landmark. Basically it’s this huge cute fluffy colourful clock:

Sebastian Masuda (and 6%dokidoki)’s running theme is cute rebellion and kawaii anarchy. Analyse as you please, but I’ve always thought of it as defying the convention of maturity and the dull working adult life. It’s like saying I don’t want to conform and obey when doing so is going to crush all this colourful spirit I have. And rebellion doesn’t have to be angry and dark; it can be joyful and pink! I love this philosophy and I’ve loved Sebastian for it for a long time, so seeing the clock was emotional.

After the clock I got to the store, which is kinda hidden up a flight of stairs down a little street full of awesome. It was crazy meeting the staff, who I’d followed on the internet for ages. They were really sweet and we talked a bit and I bought earrings. The decor is mad. There are giant colourful cubes everywhere and there’s a giant rat in the corner, and the background music, to quote Sophie, was like ‘a really intense game of Tetris’. Again, I couldn’t take pictures, but seriously, look at the 6%dokidoki website.

After all this, to top it off, when I got home my tumblr post about my Harajuku experience was replied to and reblogged by the dokidoki staff member I had met, and since she’s a big deal in the Tokyo fashion online scene (it’s a thing) I was liked and reblogged a ton of times by Tokyo fashion enthusiasts. I am now that girl in Harajuku whose pictures are being reblogged, rather than the girl sat in her room doing the reblogging. 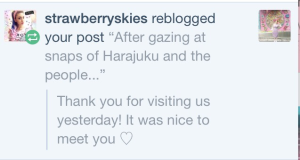 Phase one of my dream is complete. Can I become a J-pop star by the end of the year? Stay tuned to find out.

Next on my list of Harajuku things to do is find Sebastian Masuda’s Monster Cafe, get a cool haircut, go to a bunny cafe (there is one) and take part in a fashion walk. I’ll be sure to document this for you all, but rest assured that my next few posts will not just be me babbling on about how much I am actually dead because of Harajuku. My own prefecture is also really amazing and I have loads to share.