I’ve been in Denmark for about a week and a half now, and start lectures tomorrow (!). It’s been a crazy, crazy introduction week which ‘kind of’ resembled Durham Freshers that you definitely know but only maybe love, but with extra canoes. Aarhus isn’t the Venice of Scandinavia, but you can actually canoe through the centre of it and you can wave at the locals like some kind of Lord of the river and they will wave back. It’s amazing.

It’s no wonder Danish people are so happy, they get to do this all day

But I’m jumping ahead! That was Friday morning, but I’ve been here since the previous Wednesday. I arrived to practically Mediterranean weather (although it was probably more like 25oC) and the first few days were a bit like a holiday. I discovered the Studenterhus, the Students Union building that has a café, an inside and outside bar, and many other rooms I imagine. I found a Netto right around the corner from me (and an Aldi round a different corner), discovered a small tree in my garden, and the general direction of the city centre, but tragically not a duvet for my bed. This was to become significantly more of a hassle than it has any right to be for a 20 year old adult with fully functioning arms and legs that could take me to Ikea but whatever, I got one yesterday. I did try to get a blanket from Netto but the shop assistant wouldn’t sell it to me until I filled up this page of Netto stickers (like a coffee card except that they’re given out as sporadically as nuclear decay) to get a 65% discount. It was in my best interest and I did agree that saving 65% was a good idea, but he maybe didn’t realise I was sleeping in my duvet like a sack. I’m actually glad he didn’t realise as it’s not something I’m proud of.

More interestingly, I met my mentor group on Monday and we began our week of activities. During the week we learned about Danish culture, applied for a CPR number (which allows you to access free healthcare, set up a bank account, and generally not be deported) and attended an all day party called the Western party, complete with a speech from the young and cool Mayor of Aarhus (with a trendy beard, no less) that they sometimes call ‘the captain’ because they’re Vikings. It was here we were introduced to the ‘official introduction week song’ which is a crazy electro-dance tune that would be perfect for Klute, complete with an appropriately random dance. I have no words to describe it and literally no desire to hear it again so I’ll leave it for you to discover (bizarrely it contains some strong language so I’m not sure I can post it here but search for ‘Samir and Viktor’ and you’ll know which one it is. It’s unbearable. I’ll also tweet it so you can find it there).

Studying in Denmark is much the same as the UK, and Danish students are enrolled in a mix of Danish and English language courses. Denmark was presented as an open, liberal country with a high tax rate and therefore a generous welfare state. Their lowest rate of tax is about 40% and their top rate is 60%. They love it as well, like about 80% Danish people agree that they pay an OK amount of tax (my hazy memory, 2015). They love coffee which is awesome but also liquorice and I don’t know why.

The city centre of Aarhus isn’t that small but you can walk across it in an hour or so. It’s a modern low rise city that’s mostly undergoing massive building works giving it the impression that it’s not quite finished (the dock area contains the largest number of planned high rise buildings in Denmark and maybe Scandinavia but I can’t remember). It is actually one of the oldest cities in Scandinavia, having been founded by the Vikings under the name Aros (which is now the name of the large modern art gallery AROS). Despite this, it is incredibly modern to walk around in. It’s very nice and absolutely worth visiting, although often overlooked for Copenhagen (which to be fair is quite nice as well).

I start lectures tomorrow and have some reading to do, not to mention I start at 8am because apparently Danish people just like to get on with their day rather than moping about in bed (although it might explain the amount of coffee they consume). So 7am your time tomorrow, I’ll be learning ‘Persuasion’ in the Danish Business Communication school. I’m sure it will be fine.

The internet is awash with so called ‘listicles’ which are apparently Buzzfeed style lists however sound like they’re something else. So to keep up with internet fashion here is my list of the month:

7 ways you can know that instead of being in England, you are actually in Denmark

I don’t know if this is true but I haven’t seen a single bee yet. Instead they have these flying spider creatures. So look around you, and if you don’t see bees you might be in Denmark.

In England most people only speak English, so they only have one choice of language but in Denmark almost everyone has two. I once pretended to be Danish at a supermarket checkout by not saying anything and just nodding at whatever she said. I think she guessed when she said ‘have a nice day’ as I left.

Actually this is pretty applicable to both.

It’s true, I didn’t see a cloud for the first week.

Aarhus has an excellent public transport system, and you can technically drive a car but most people choose a bike because it’s cheaper and a good way of keeping fit. The cycle paths are wide and separate to the road. Danish people like to complain that it is not great to cycle in Aarhus because of the hills but they clearly have never been to Durham as its pretty much flat everywhere in Denmark.

It’s true. Get yourself a black wardrobe and bleach your hair before coming here.

Only joking, the UK is alright too. 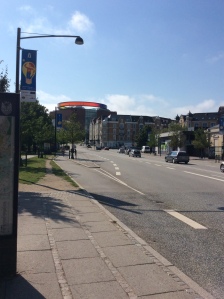 ARoS art gallery in the distance, it’s name comes from the Viking name for Aarhus and latin for ‘art’ or something 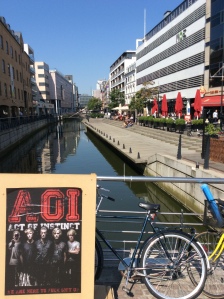 The canal complete with modern buildings

One of the central landmarks 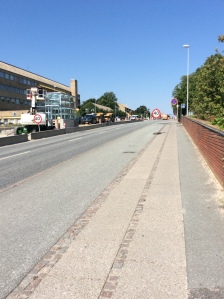 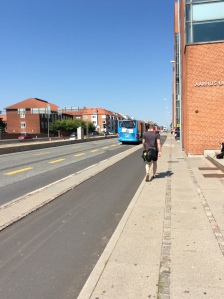 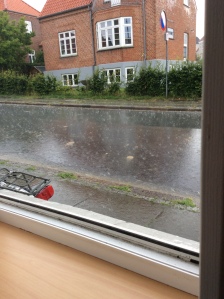 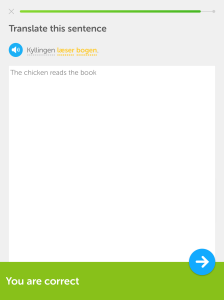