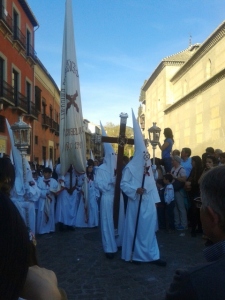 Holy week is one of the biggest events of the year in Andalusia, welcoming thousands of visitors to the region in search of the countless religious celebrations. In Granada it is no different: in the first week of April the city was abuzz with life, the streets were crowded with people and coloured processions marched through the streets from Palm Sunday to Resurrection Sunday.

The processions are carried out by the many brotherhoods of Granada, some even dating back to the 16th century. They wear special costumes,  with tall peaked hoods of different colours depending on the brotherhood. These may appear a little controversial, but they actually dates back to an old tradition of seeking penance for sins without revealing your identity. 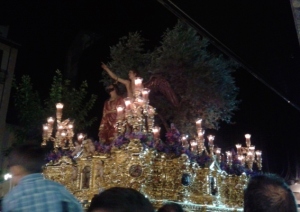 They walk alongside huge floats depicting scenes of the suffering Christ and the Virgin Mary, which are carried on the back of a group of men or ‘costaleros’. The overall effect is simply stunning.

In my opinion, the best of these processions were the Gypsy Procession on the Wednesday and the Silent Procession on the Thursday of the holy week. The Gypsy Procession winds through the beautiful cobbled streets of the Albaicín and Plaza Nueva, up into the hills of Sacromonte, lighting bonfires and singing traditional songs to the Virgin Mary as they go. All the while the Alhambra looks on, glowing brilliantly, set against the darkness of the hills around it. This walk is no easy feat, as the climb up from the Albaicín is particularly steep, especially for the poor costaleros with hundreds of kilograms on their backs! There is also a particularly narrow part of the procession route as you begin to enter Sacromonte, meaning you have to get out the way QUICKLY or risk being squashed into a wall. When we reached Sacromonete to watch as the procession passed, we began to hear the tell-tale echoing of flamenco music from the ‘saetas’, hymns sung in a flamenco style, creating an eerily beautiful atmosphere. The procession finished in the early hours of the morning leaving those who had stayed to wander back to their respective homes. It was an awe inspiring thing to behold. 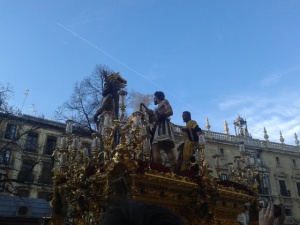 On the Thursday (or Maundy Thursday) the air of the Albaicín was filled with the aromas of food and incense, and the winding streets were alive with colour. Four processions took place during the day and then, as the clock reached midnight, the Silent Procession began. The street lamps along the route were turned off and, as the name suggests, the whole event took place in silence. No songs, no brass bands, just footsteps and drum beat to set the pace, with candles to guide the way. It truly was a moving event to be a part of.

Holy week in Granada is something I will never forget. Watching row upon row of brilliantly coloured brotherhoods; huge and beautiful floats perched on the backs of resilient costaleros; and the excitement and devotion of the crowds on the streets, I came to appreciate how much effort the people of Granada had exerted in order to make the whole week a true spectacle to behold. Bring on Semana Santa 2016!