Reading week is over and my exams are almost upon me. Some friends decided to come and visit me during reading week. I had a mad four days trying to get all of my work out of the way before they arrived. I didn’t really manage it, but I did get a lot done. It was great to see them, and made me miss home a bit. We all decided to go skiing, which turned out to be one of the best decisions I have made since I got here. It has been 14 years since the last and only time I have tried skiing. 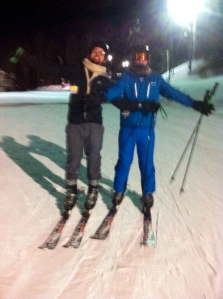 I wasn’t very good, but I decided to go really fast anyway, and ended up flying down the mountain on my back for most of the day. It’s the same with ice skating. I can speed up but I can’t slow down.

The slopes were huge. We decided to go to ‘Blue Mountain’, a three hour drive north of McMaster. It was well worth the drive. There were about 30 slopes, over an estimated three square kilometers of mountainside. All really well maintained. We had an awesome two days at the slopes. Although it was even colder than usual at the top of the mountain.

I have also become friends with two guys from the university of Lancaster since we have been spending a lot of time together working on projects. I have decided to extend my travel plans for the end of the academic year to include trips to Vancouver and San Fransisco with them. They were already going, and one of their friends had let them down so I am taking his place. It’s going to be awesome, and a really nice reward for the year’s work.

After I return from that trip, I will be going down the east coast of the USA with my girlfriend for a month, so this blog should get a lot more interesting around the 29th of April.

As for my studies, I am nearly done. I am now preparing for my exams, all of my assignments are done. All that is left to do this year is to take four exams. The weighting is much less that I am used to in Durham. My second year exams in Durham counted for 90% of my courses. Here, the most highly weighted final exam is 40%. I have exams in particle physics, relativity, solid state physics and advanced quantum mechanics, and I really need to start studying. This is a shame, since it has finally started to warm up, and all I want to do is run. It was a really decisive transition to warmer weather, as with the previous transition to cold. In two weeks it went from -10 to +20. Not that I would know. There is too much relativity to learn.