This was the most exciting weekend that I have had in Cologne so far.

Cologne is renowned for its Karneval celebrations which take place mainly over one weekend in February, but the festival officially starts on November 11th. For the entire weekend Cologne is full of partygoers, dressed up as anything from Minions to iPhones. 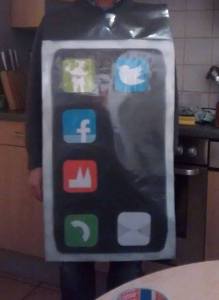 My housemate, dressed as an iPhone

Thursday – Weiberfastnacht – Women’s day. The first day of the weekend is dedicated to women. They go around dressed up and carry scissors to cut men’s ties off. On this day the festival officially starts at 11 minutes past 11.

Unfortunately I had to work on this day, although I had the opportunity to watch my school celebrate their own Karneval where each class had to perform their own song, dance or game on stage. 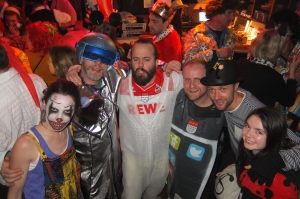 Buying a thick lady-bird onesie in Primark for the cold weather turned out to be a hot, sweaty mistake… :S

Saturday – The Ghost Parade – unlike the official Monday parades, this is a parade you can join in with!! People dress as ghosts and ghouls, and drummers lead you down the streets of Cologne for a truly unusual experience.

Monday – Rosenmontag. Parade day!! We woke up fairly early and managed to make it to the start of the parade and grab front row places! Parade-goers shout ‘Kamelle’ and participants in the parade throw sweets and flowers. Our mistake was not to take a big enough bag to carry all of our sweets…

The theme of this Karneval was Sozial Jeck – meaning something like social banter or craziness. 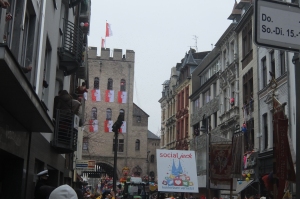 Tuesday -Nubbelverbrennung – The puppet burning. A little like Guy Fawkes, inhabitants of each part of the city display a puppet outside their shop or bar for the duration of Karneval. In the late evening of Tuesday the puppets are burnt to symbolically rid the citizens of Cologne of all sins that they have committed during Karneval. On this evening, we were lead around a square, forced every few minutes to go on one knee to be blessed by ‘holy water’ and mourn for the poor Nubbel. Many people wore black and cried during the burning (pretending… I think).

So, rather an eventful weekend. I will certainly be returning next year 🙂