– If you work hard enough at it, you can grind even an iron rod down to a needle – “Constant drilling can wear away a stone.”

On Friday we finished our final exams of the term. This feels like a massive achievement as I’ve been quite ill recently and am ready for a holiday! China doesn’t celebrate Christmas so we had no time off in December, and our university holiday instead falls from January to March over the Chinese New Year period. I’m heading home to be fattened up again by my mother.

The illness can be split into two bouts – Christmas and New Year – and I’m still unsure as to whether they were related or not. The first bout was incredibly unpleasant; over the first few days, the bathroom became my world and I became very well acquainted with the floor tiles as I laid there for the best part of 48 hours. After making the poor decision to show my face in class on Christmas day, I crawled to the University Hospital to see a doctor. With the help of sign language, I explained my predicament entirely in Chinese. A subsequent blood test verified that I had Gastroenteritis, which might have been from the canteen food at Peking University that I have paradoxically raved about in previous blog posts.

Ma la xiang guo – this used to be my favourite meal on campus!

The doctor sent me on my way with antibiotics, which did the trick after a few days. I lost 3-5kg over the three days of intense illness, and I was just about back to eating normally when I regrettably braved the canteen food again on the 30th December. This led to another round of illness and after a second visit to the hospital I was sent away with 16 days worth of antibiotics and medicinal clay. Thanks to the drugs, and Harry’s patience and willingness to go on missions for lollies and Coca Cola, I’m pretty much back to normal now. What an unconventional Christmas! 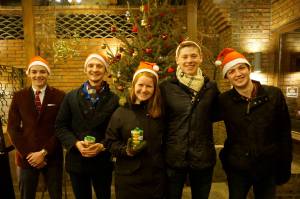 Although I lost the best part of a week’s revision thanks to the aforementioned, the majority of my exams were rather straightforward. However, thanks to our fairly eccentric listening teacher, our listening exam consisted of singing a Chinese song in front of our class of 30 students. My song (http://youtu.be/wjlrJl1OlfY) went down quite well after I turned the volume up so loud that my singing voice was inaudible. It’s quite a jazzy number, and another song to add to my KTV (karaoke) repertoire. Songs from other students included love ballads (very popular among the Japanese students) and traditional Chinese songs. The official song of Mao Zedong was also performed (http://youtu.be/31FSj7RuqGU) and the Russians blew us away by their rendition of this little ditty composed by some English ex-pats  – http://youtu.be/2XTBwvi0h2E

While the exam was bizarre, it was a lovely way to enjoy an hour of people embarrassing themselves and say goodbye to some classmates who won’t be returning next term. Alongside the listening exam, I had grammar, writing, and speaking tests. We won’t get the results until after we return to China, but I’m confident I’ve passed them all. The monthly tests over the past term have been fairly intense and completely different to the Durham system, but I’m thankful that it meant our final exams weren’t worth 100% of our grade.

The exam system has not only been better for the stress levels, but also for my Chinese, as I have been forced to constantly keep on top of new characters and grammar points. After our placement tests at the start of the year I requested to be put in an ‘intermediate’ level Chinese class that was probably a little too difficult for me, but I’ve gone from struggling near the bottom to comfortably being able to participate. It’s highlighted how completely wrong my methods of learning were in my first and second years of Durham so I’m looking forward to seeing an improvement when I return for my fourth year. Most of all, it’s lovely to finally have the ability to hold a meaningful conversation with my ever-patient language partners. I can’t thank them enough!

Although I’m not in Asia at the moment, the blogs will keep coming as I have many more exciting tales to tell about the last term. 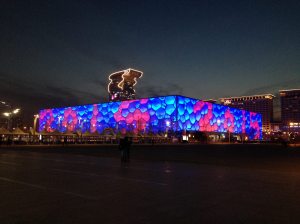