About six weeks ago, the news broke in Beijing that the whole of the city would have a weeklong holiday to coincide with the summit of 21 world leaders for the Asia Pacific Economic Cooperation summit. It seemed too good to be true, but after Peking University confirmed that we would indeed have seven days off university, I rushed to figure out options for seeing a bit of China. In a wonderful coincidence, my Dad had planned a business trip to Japan during this time, so flights were booked and plans were made.

I flew into Osaka to meet my parents (shout-out to my brother who couldn’t come over – we missed you). Osaka is widely regarded as Japan’s second city after Tokyo, and I fell in love with it very quickly. We caught up over a delicious meal (sushi, of course) before my Dad and I had very girly Godiva cocktails in the rooftop bar.

In a whirlwind tour of the city, we spent a morning admiring the grounds and interior of the magnificent Osaka Castle. We took a train to the park area in which the castle was situated and dodged the various Sunday runners. It was a beautifully fresh day, and remarkably calm for a Sunday (although I think my judgement for how busy places are has been permanently skewed by three months in Beijing). 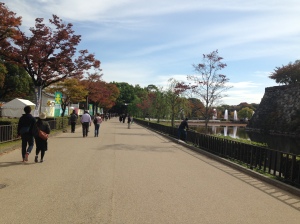 Park area (the moat is on the right)

Osaka Castle is the symbol of the city and building commenced in 1583 by Hideyoshi Toyotomi, one of the three great warlords and unifiers of medieval Japan. The castle is surrounded by a very impressive moat, and guarded by imposing gates. It was difficult to gauge the size of the 30-metre tall castle wall until we saw two girls taking ‘selfies’ next to it (I then took a picture of them for scale). We paid the entrance fee and regrettably took the seven flights of stairs up to the top, rather than the lift. That was my fault and I believe my Dad still hasn’t forgiven me. We emerged at the top of the castle, sweating and tired, but greeted by a 360-degree view of Osaka’s city and surrounding mountains. I was persuaded by the posters in the tourist shop at the bottom of the Castle that we should come back during the cherry blossom season – expensive but beautiful.

Osaka Castle (parts of the gold are dolphins and tigers)

It was difficult to gauge the size of the wall 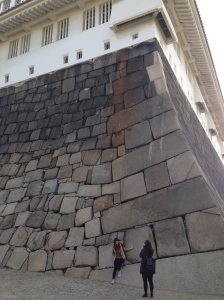 Here are some humans for scale

In the evening we went to Dotonbori – a groovy shopping district that runs along the Dotonbori canal. It’s famous for the billboard for the confectionery company Glico, which shows a runner crossing a finishing line, so we took lots of pictures in front of that, as well as a restaurant with a massive moving crab over the entrance. I can’t take credit for the crab pose – I took inspiration from the many other tourists. 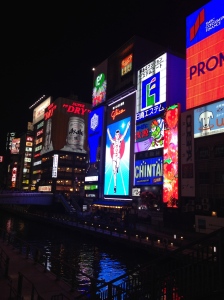 Glico Boy looking over the Canal

For dinner, we stumbled across an amazing teppanyaki style restaurant that also served cheese fondue. Good cheese and non-mystery meat isn’t easy to come by in China, so I disgraced myself by eating my weight’s worth of dipped veg and friendly looking beef. My parents got into the Japanese spirit of things with their chopsticks (may have been helped by the very drinkable Japanese rice wine). Teppanyaki is not only delicious, but such a social way to have a meal, so I vote to get one of the iron griddles installed at home for dinner parties.

Kyoto is only a 30-minute train ride from Osaka (comparable to the travel time to Tianjin from Beijing) so my Mom and I decided to spend a day looking around some of Japan’s temples. Our first stop was the Bamboo Forest, which was like nothing I’ve ever seen before. The bamboo was so tall and dense that the little light that seeped through had a green sheen to it. I felt like I was in a scene from Zhang Yimou’s ‘House of Flying Daggers’, while my Mom kept singing ‘Me Ol’ Bamboo’ from ‘Chitty Chitty Bang Bang’ (http://youtu.be/bQgXccbxHbM). We took photos with the umbrella, but I’m not sure the photo evidence of my Mom will clear family security clearance for the blog.

We moved onto our first temple of the day, Tenryu-ji. It was registered in 1994 as a UNESCO World Heritage Site, and while I enjoyed the building, I was more impressed by the coy-carp filled lake, surrounded by vibrantly coloured trees. Throughout our stay, we saw many women in traditional Japanese kimonos and I took some sneaky snaps of them posing in front of the beautiful landscape. We couldn’t work out if it was a Sunday thing, or if it was just habit to wear beautiful silks when sightseeing so the pictures turned out better. Either way, we had serious kimono envy. 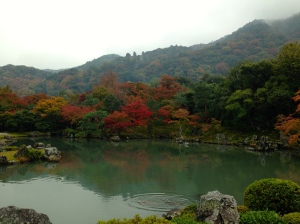 Note the ripples from the coy carp 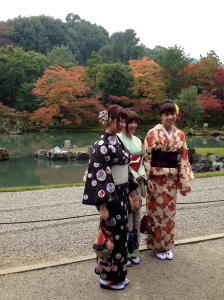 After a traditional lunch of Japanese curry, we moved on to Kinkaku-ji, which is one of the most famous Zen temples in Japan. It was incredibly busy, but it was really impressive, and very different to Tenryu-ji. Unfortunately, we got caught in the rain as we snaked around the designated tourist route, but we didn’t let this dampen our spirits.

Our final tourist destination was the area around Ginkaku-ji, where we looked for the ‘Philosophers Path’. While people had raved about it on trip advisor.com, we thought it was comparable to an average dog-walk in the Isle of Man, so we bought ice-cream instead and made our way back to the train station.

Our final stop in Japan was Tokyo. We took the Shinkansen (bullet train) from Osaka to Tokyo, which was lovely and provided us with pretty mountainous scenery to admire.

View from the train

After settling in at the hotel, we accidentally found ourselves in Asakusa, a district in northeast Tokyo. It’s home to Senso-ji which is an ancient Buddhist temple, as well as many markets and stalls. My Mom and I were bemused by the hordes of tourists buying incense sticks, throwing them into a pit and then wafting the smoke over them. I bought a few Christmas presents from the market area, and on the advice of the Asakusa Tourism bureau we went to a very odd shopping centre called Ekimise, after politely declining the opportunity to visit a ‘famous’ street filled with plastic food models. Although the shopping centre was odd, the view was worth the walk, when we emerged to see a view of the Tokyo Skytree and a beautiful rooftop Christmas tree. 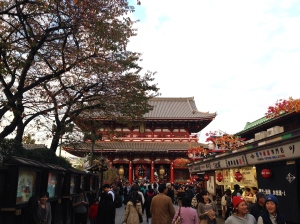 The next day was one of my favourites as we finally went to the Yasukuni Shrine – I’ve read so much about the controversies surrounding it and I was quite star-struck to actually be there. For those who haven’t heard of it, the Shrine commemorates the Japanese war-dead but has been surrounded by controversy since 14 “class-A” war criminals were enshrined there in 1978. I recently wrote an article on the Yasukuni Shrine and its effect on Sino-Japanese relations; let me know in the comments if you’d like a look. The gate to the Shrine was the tallest of its kind in Tokyo, and the complex felt suitably solemn. It felt much more authentic than some of the other temples we had visited, but this could be because I understood the history behind it. My Mom and I spent a few hours looking around the revisionist Yushukan War Museum in the grounds before moving on to the gardens in the centre of Tokyo, surrounding the Imperial Palace. 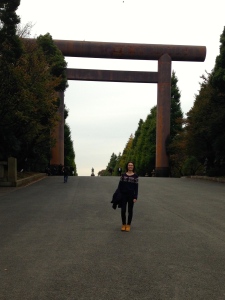 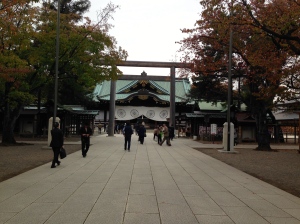 While it was disappointing to not be able to see the Tokyo Imperial Palace – we learnt we should have booked a tour months in advance – we were able to enjoy the surrounding gardens and parks. Our last large tourist attraction was the Meiji Shrine, which is dedicated to the late 19th century emperor who opened Japan to the West. It was hidden away in a little forest, and thus incredibly pretty and peaceful. My Mom and I were lucky enough to witness a wedding taking place in the Shrine, as well as lots of very cute children dressed in traditional Japanese clothes. The twins below were adorable until one of them decided to start biting her father(?)’s leg. 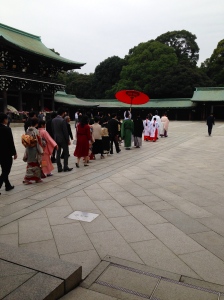 Wedding in the Shrine

We marvelled at the weirdness of nearby Harajuku, which is known internationally as a centre of Japanese youth fashion and culture. We had a peek in a second hand shop, which was like Aladdin’s cave for denim jackets and faux fur and finished our afternoon with a Starbucks. We also saw a condom shop on the corner of the crossroads, but didn’t venture in and instead settled with taking a photo outside. 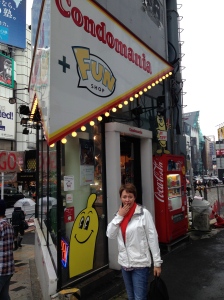 Our last experience of Tokyo was in the cosmopolitan Roppongi Hills area. The lit up trees surrounding the street of designer shops were so beautiful and very seasonal – Christmas is coming!

There was a tearful goodbye at the airport, but I’ll be reunited with my parents (and Harry!) in January. Not long…