I’ve had a huge amount of adventures since my last blog post! Subsequently this post will have no unifying theme whatsoever, other than ‘things Beth has done recently’.

To start with, ten of my closest pals and I headed off to Ottawa at the end of October. We went just two days after the terror attack on the parliament and the shooting of Cpl. Nathan Cirillo, and so we had apprehensions about our own safety and the mood the city would be in. It was clear the city was in mourning, the war memorial unrecognisable because it was steeped in flowers and tributes to the soldier. The parliament had also shut its doors. But, nonetheless, the city was still as beautiful as ever, even more so, perhaps, given the peacefulness and self-reflection that descended on the city that weekend. Ottawa, and the parliament buildings in particular, looks like something out of Disneyland. The tall towers and really majestic architecture that follows the bends and inlets of the Ottawa river were truly stunning, given the fall colours and the sunset behind us as we took in the view. Ottawa is a fantastic place: lots of history, lots of museums, great shopping and fantastic food.

The fall colours and parliament buildings in Ottawa

The next adventure was to experience a true North American Halloween weekend. My goodness do they go mad for Halloween here. Neighbours’ houses were covered in spiders’ webs and giant inflatable witches. In our own house (I live with 7 other girls – 5 exchange students and 2 Canadians) we threw a fantastic house party. Given there are 8 of us we settled on potentially the best costume idea you’ll ever encounter: we were each one tentacle of an octopus! And for that purpose I bought a sequinned purple cat suit from the thrift shop, a costume that will go down in history. 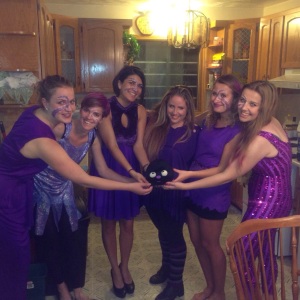 The residents of 3rd Ave. in their octopus costumes

Next we chanced our luck on a gig by three local Canadian bands at a bar called The Brooklyn. Firstly, the bar is fantastic! In an old warehouse decked out with wooden benches and fairy lights, the place has a great atmosphere. Then the bands were also great! One was even comprised of Queen’s Students (Will Hunter Band) and were really good. It turns out Canada has a fantastic music scene and doesn’t only produce country music (although country music clearly holds a large place in the heart of every single Canadian!).

Gig at The Brooklyn

Then last week, as one of my closest friends is only staying for one semester, and therefore going home at Christmas, we decided to tick something off our bucket list, or just do something fun, every night of the week. Monday we wanted to see a bear, so we headed to an event called ‘Pints and Pool’ at a bar and restaurant called the Grizzly Grill where they have a life size stuffed bear, and played pool until the early hours of the morning. Tuesday we joined one of my housemates at her regular rock climbing club and learnt how to climb. Wednesday we ticked off two more of the cakes at the uni coffee shop ‘CoGro’ as it’s on our bucket list to try every single one of a range of around 15 different cakes. Thursday was a ‘Graffiti kegger’ – a house party where you don a white t-shirt and bring along a sharpie, and all hell breaks loose! Friday was just another house party. Then on Saturday all our other friends joined us at a masquerade ball! Sunday we slept. A lot.

And this brings me to this last week! Earlier in the week was a bar crawl and a semi-formal where the girls donned their prettiest dresses and the boys panicked to get a suit together in the two hours before the event. But the real excitement this week was an event called DUSTED, standing for Drinking an Unexpecting Small Town Establishment Dry. They bus 500 Queen’s students one hour out of Kingston to a country music bar in the middle of no where, where you dance and laugh along to the real Canadian back country experience until the buses come back for you hours later! It turned out to be one of the most fun things I’ve experienced in Canada so far!

And there you have it; you’re now updated on all my movements within the last month. A mishmash for sure, but the most fun I’ve ever had.