View across the sea to Israel

For the past few days the weather in Amman has been TERRIBLE. Rain, cold and fog- it feels like winter has finally arrived. Because of the mini ice age (slight over exaggeration but I’ve become acclimatised to Middle Eastern heat) I decided to tag along on my friend Ana’s trip to the Dead Sea. She assured me that it’s “warm all year round!”, which I’m not sure is scientifically true…

It’s actually really easy to get from Amman to the Dead Sea by bus, you just have to pop into the ‘Jett’ bus station in Abdali and buy a ticket for 10JD (around £9). It leaves on Fridays at 8am and brings you back at 4pm and the whole journey doesn’t take more than an hour. When you arrive at the Dead Sea there are a number of resorts and hotels you can chose from along one road. Some are more pricey than others, especially the hotels like the Marriott which is 40JD entry, although I think that may include lunch. It’s also worth bearing in mind that a lot of places are cheaper during the week than over the weekend (Friday and Saturday in Jordan). There are public beaches, which are cheap or even free, however I haven’t heard great things about them. In a lot of cases they are quite dirty and you’re very likely to draw attention to yourself, especially if you are a foreign girl. We settled for Oh! Beach which is 25JD entry or 40 JD for entry and a buffet lunch.

Despite not being a flashy hotel, Oh! Beach was pretty amazing! It comprises of several levels built into the cliff descending into the Dead Sea. There are a few beautiful (but cold) pools as well as incredible panoramic views over the Sea and across to the Israel. If you want to get into the sea there is a pebble beach right at the bottom and FINALLY you are at the world’s “lowest elevated point on land”- according to Google.

The Dead Sea is obviously most famous for its enormous salt content, which firstly means nothing can live in it (hence the name) AND secondly it is pretty much impossible not to float. A word of warning: if you attempt to walk in rather than dip in off the jetty at Oh! beach, wear shoes! The rocks on the sea floor are spiky with salt sediment and can cut your feet, which in turn then burn because of the salty water. Once you get in though it a really strange sensation bobbing along on the surface and swimming is pretty much impossible. The water was also surprisingly warm, despite the fact it was the end of November! If you do visit you also have to try the famous Dead Sea mud, which Oh! beach doles out for free, plus a small tip for the guy who assists you.  Apply, bake for ten minutes, dunk in the sea. Result? Lovely soft skin.

After a spot of tanning (YES: the sun made an appearance at the Dead Sea despite its absence in the capital) we went to find some lunch. As we’d opted out of the buffet we ordered burgers and chips from the bar, which weren’t great but satisfied our hunger! A can of drink turned out to be 2.5JD (which in Jordanian terms is a bit of a rip off but fairly normal at resorts), so in future I’d steer clear and bring extra water. Also: beware of the flies! They seem to be everywhere down by the Dead Sea, especially if you’re eating!

As we had a little time to kill before our bus came back for us, the beach arranged a car to take the four of us to and from the nearby hot springs (which cost 25JD altogether). The area is a little dirty, but the hot springs were a lot of fun. We found a secluded little pool and waterfall past the streams of hot water and then sat in the spray of a giant hose that has been installed funneling out the water from the springs. 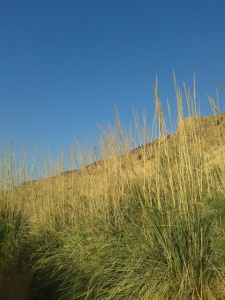 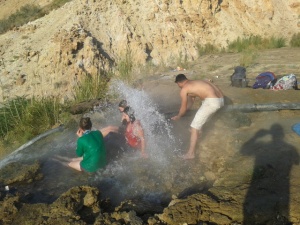 A rather strange end to the day

All in all in was an amazing day: Oh! Beach was lovely and the Dead Sea is definitely an experience not to be missed when in Jordan. It is amazing to think how much of a contrast it was to the cold in Amman, even in November, and definitely makes for an excellent retreat from daily life in the capital!

Don’t take me back to the rain!