One month in and I’ve settled in nicely. It didn’t take long to furnish myself with a bank account, phone, etc. People here seem very willing to be helpful, occasionally quite beyond my expectations. Even opening a bank account with no address or phone number worked. I just had to go pick up my mail from the bank where they would hold it for me until I found somewhere to live.

Last winter here was cold. Really cold. Almost every Canadian I have met has warned me how cold it was. It reached minus forty degrees and everyone seems to have a different story about how it affected them and it was the worst for 100 years (or so I have been told by everyone). In spite of this, the last month has been really warm. Some days have been sweltering. The whole month has been drenched in brilliant sunshine and cycling around the city in exploration has really been a pleasure. 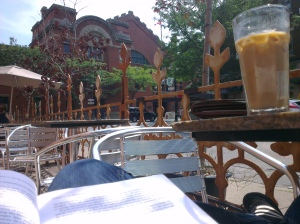 Coffee is a staple in Hamilton. Tim Horton’s is the ubiquitous Canadian coffee shop and the brand originates in Hamilton. There must be fifty of these cafes them in the city. I have been slowly becoming addicted to caffeine since arriving. This is probably partly because of my course. The physicists do seem to drink more coffee than average, and average is a lot.

The market is one of the nice things about Hamilton. It predates Hamilton as a city and has evolved from an open square to a huge glass building adjoining the central library. It is open four days a week and has a really nice atmosphere and the produce is fresh and local. I have been traveling across the city once a week to buy produce. Many of the vendors have previously studied at McMaster, and I am already on first name terms with three of them. People here really are friendly. 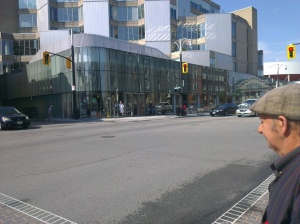 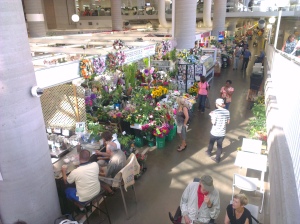 -A picture of the original Hamilton farmer’s market

One thing I am noticing here is the wildlife. The university is on the edge of town, and I live right at the end of one of the streets near the university. Beyond my street there is a conservation area, and the wildlife quite regularly ventures out into the streets and campus. I have tried to take pictures when it happens, but the most I have caught is the Canada geese that regularly waddle through campus.Black squirrels are everywhere throughout the day and are quite a bit cheekier than the UK variety. I have seen deer in the morning and I have nearly run over a skunk on my bike. I’m really glad I didn’t. 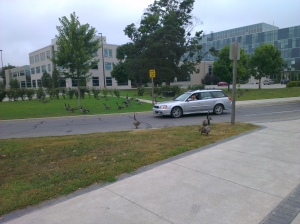 -The campus geese annoying a driver

As for my academics, the workload is heavy. It’s much heavier than the second year of my degree, but I assume that this is true back in Durham as well. I have assignments due every day or every other day, and I am finding the continual grading which is adopted here surreal because I am not at all used to it. In some courses I have already received 30% of my grade. In one of them I got the first 10% in the first week. I am hearing a continual hum from other students that this is done to inflate grade point averages. I have four assignments due before the end of next week and I will probably be given another before the end of this one. It is, however, manageable. I am finding that the large workload is, in effect, really good motivation.

I’ll leave you with a picture of me struggling to furnish my room. I had to drag all my furniture home on the bus. People are really accommodating. I’ll update again soon. 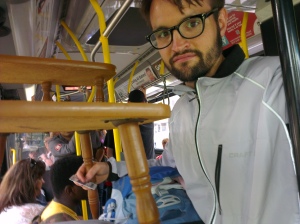 -People pretend that they notice when you enter a bus carrying furniture.