It seems like an age ago that I left my mum and girlfriend at Gatwick airport. We said a long goodbye. So long that by the time I had got through check in my flight was boarding and I walked straight onto the huge plane, the kind I always see in American movies. The size made it feel really powerful in the air and there was barely any turbulence. I watched England disappear from the window. 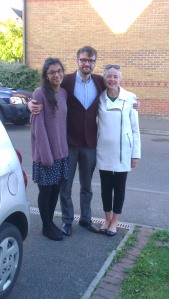 -Departing for the Airport

The plane left England at noon and arrived in Toronto, seven hours later, at 2.00pm. I picked up a visa, which was painless and entered Canada for the first time. McMaster had organised a free bus to my hostel, and I chatted with Canada’s nicest cab driver. He invited me to go biking the next day but I had loads to organise. He seemed surprised that no one was meeting me, and gave me his contact details in case I needed help.

-Driving through Downtown Hamilton to my Hotel

The hostel was in the center of Hamilton, which houses the university. I was staying at the cheapest place in town. It turned out to be a great choice, providing free wifi, printing, computing, international phone calls, laundry, soap. Tom, the hotel receptionist even took me biking along one of the forest trails that extend outward from the town. It was full of exchange students going to McMaster. I met two people taking the same course as me on the first night.

Hamilton is an old steel town. It sits at the tip of lake Ontario, just south of Toronto. It labels itself a ‘waterfall city’, there are hundreds running through the outer regions. Sadly the trail I took with Tom did not meet any of them. I’m will explore more once I’m established.

-The start of the Burlington Rail Trail (with Tom in background) 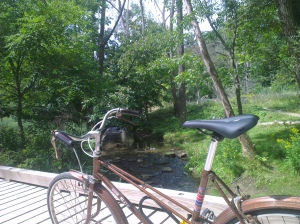 -Picturesque spot on the trail 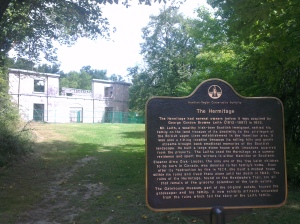 -An old hermitage on the trail

The first week in the hostel was hectic. I had to get a phone, bank account, accommodation for the year. Searching for a house was painless. Most of the students live in the Westdale area surrounding the university. It has a totally different feel to the industrial heart of Hamilton. It is full of fast food and trendy bars with titles like ‘The Snooty Fox’. It was here I made my search.

I ended my search in a clean, dry, ground floor room. It’s in a small house about a 10 minute walk from the university. I can leave my room and be in a lecture five minutes later which is going to be useful.

-In a nice house

After settling in I went to explore the university. McMaster is huge. It, like most of the Canada that I have seen, is beyond the scale of anything at Durham. It has a nuclear reactor and a stadium, a bus depot and a hospital. Some of McMaster is housed in neo-Gothic architecture. Luckily, being as I am taking maths and physics, I am taught in the idyllic Hamilton Hall and Burke Science Building.

Hamilton Hall is such a nice building that I had assumed it would be a listed administrative building. I was really surprised when I opened the door to find my lecture hall and a café. The class sizes are smaller than at Durham, and lectures are typically given in mini lecture theatres or classrooms. I have been told, however, that some first year courses are taken by up to 600 students a year.

Café’s are typical of all of the university buildings and are involve a lot more marketing than the physics common room at Durham. The university is campus oriented, this gives it a busier feeling than Durham. Students are always on campus and are catered for by bars, café’s, shops, a dentistry and a ‘willy dog’ stand.

The campus is a great place to be and was absolutely packed during freshers’ week as it became packed with various companies and societies advertising to students. They seemed much more willing to give free stuff than what I remember of England. I got free pizza and brunch bars.

Overall, my transition to Hamilton went really well. Nothing went wrong and nothing was a major shock. It took a while to get used to the time shift but I am writing this from my new bedroom in Canada, on the 5th day of term. I can’t wait to see what this year has in store. 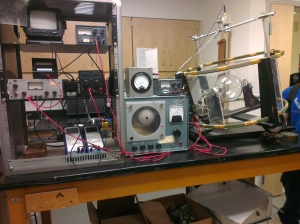 -What the year has in store – Experimental set up.